It is rare but not entirely uncommon to see a manatee swimming in the Atlantic waters of Maryland and Virginia. This one was dead, however, bobbing in the surf off Assateague Island near the Maryland-Virginia border in late October.

As required by law the Maryland Department of Natural Resources took possession of the protected marine mammal’s 800-pound body and transported it to the Smithsonian’s Museum Support Center in Suitland, Md. There, scientists cut it open to try and determine why it died. 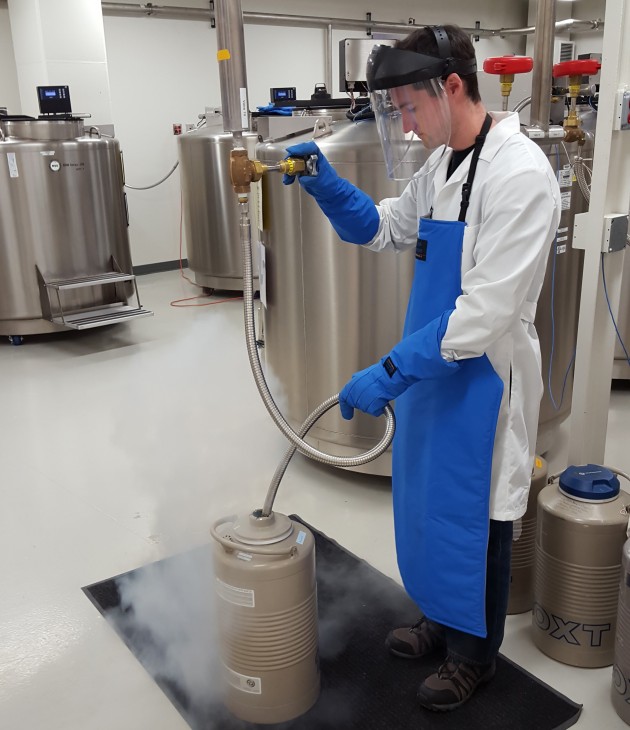 Steve Thornton dispenses liquid nitrogen into one of the Global Genome Initiative’s portable dewars. These tanks are taken into the field by scientists, filled with collected biological tissue samples and then shipped back to the GGI in Washington, D.C. (Photo by Jimmy Bernot)

“Unless there are clear signs of a boat propeller strike or something else, these necropsies are often frustrating in that the cause of death is usually not obvious,” says Steve Thornton, a scientist at the Smithsonian’s National Museum of Natural History. “All we can do is examine the internal organs, and go through systematically and take organ samples for lab analysis and note anything unusual.”

During the necropsy, however, something unusual did occur. Thornton took samples of the dead animal’s skin, blubber, muscle, heart, liver, lung and other organs, and placed them in 12 2-milliliter vials which were deposited inside a liquid nitrogen-filled vat and frozen at -190 degrees Celsius. “It is actually the first Florida manatee in our Biorepository,” Thornton says, referring to the new state-of-the-art tissue storage facility which is part of the Smithsonian’s Global Genome Initiative.

“Each vial gets its own unique Biorepository number,” Thornton explains. “Each of these numbers also has a unique barcode similar to what you see on your groceries. Next we scan it into our computerized sample management system, called FreezerPro, and enter relevant information about the samples—genus, species, where collected, collected by, etc., into EMu, the Museum’s electronic sample catalog. As everything is scanned, we have an easy way of looking into the system and finding each sample based on the Biorepository number we assigned it.” 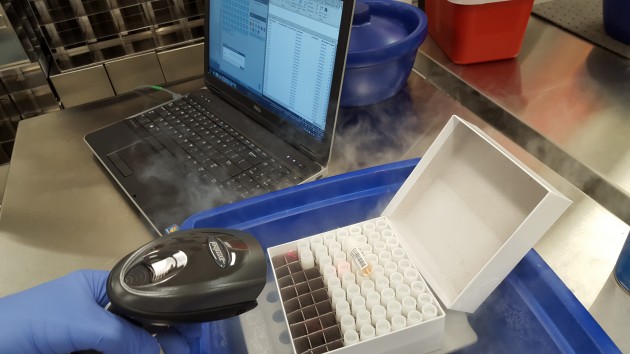 Located at the Smithsonian’s Museum Support Center in Suitland, Md, the facility is the world’s largest museum-based genomic biorepository. The majority of its samples are held in 20 liquid nitrogen storage tanks that each hold about 75,000 vials. The care with which the manatee’s tissues and information were catalogued underscore that quality, validity and accessibility insure the collection’s scientific integrity and usefulness.

The biorepository “is all part of a massive investment by the Smithsonian in the future of genomic collections,” explains Jon Coddington, a Smithsonian spider expert and director of the Global Genome Initiative. “We’re really serious about this. We’ve invested big time in this program.”

The reason behind the genomics push, Coddington explains, is tragic but simple. “Experts in extinction think we may irreversibly commit half of life on earth to extinction in the next 50 to 100 years. We don’t have the technology to bring these species back from the dead but we can at least preserve” their genetic material. The Global Genome Initiative’s present goal is to collect samples from half of Earth’s living plants and animals in the next five years. “Preserving that information before it goes is what the Smithsonian is particularly interested in doing.”

Why is this important? “Organisms do amazing things,” Coddington says. “Sharks get much lower incidences of cancer than any other group of organisms. What is it about their genome that is not susceptible to cancer, which is of course a disease of the genome? Individuals of the jellyfish Turritopsis are immortal, as far as we know they never die. How do they pull that off? Crocodiles eat things that are flat out poisonous.” Someday solving these mysteries may allow humans to cure diseases and live longer. Genomic science has the potential to revolutionize the fields of taxonomy, phylogeny, evolutionary biology, ecological research and monitoring, environmental change and health, agriculture, drug development, and more. 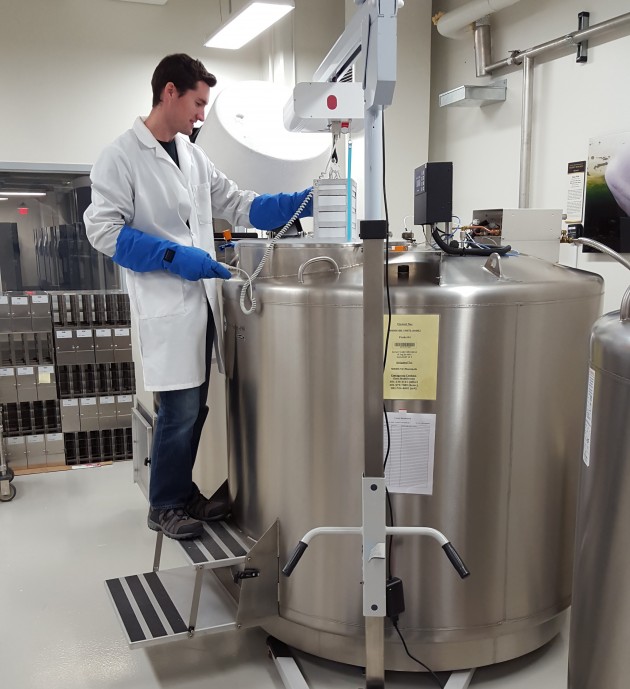 Living tissue contains a plant or animal’s DNA profile, its complete set of genetic instructions. Seen in print the human genome would consist of a chain of some 3.2 billion letters.

“Geonomics provides us with a huge amount of data to accurately construct the tree of life, the genealogical relationships between species,” Coddington says. “It’s probably the strongest signal there is in the natural world; it’s the best way to store and retrieve information about biology.”

Today scientists are in the field worldwide actively collecting plant and animal tissues for the Global Genome Initiative, placing them in cryogenic vials which are then shipped to the Smithsonian inside portable liquid-nitrogen containers called dry-shippers. At the Smithsonian the dry-shippers are open by technicians like Thornton who register and catalog the tissues and the store them.

The Global Genome Initiative has already inventoried the families and genera currently represented in many biorepositories around the world and will strategically collect samples during the next five years to fill gaps in genomic diversity. Currently the Global Genome Initiative has samples from more than 2,000 families and nearly 9,000 genera that are in, or ready to be transferred to, the Smithsonian’s biorepository. 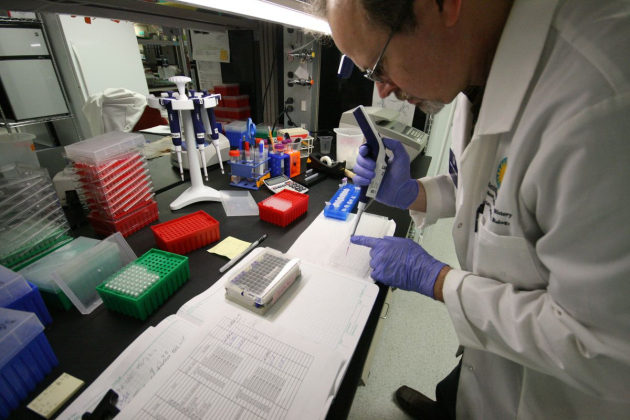 To reach their 6-year collecting target, the GGI is also driving collecting expeditions in three ways: GGI is

At a slower pace and using the high-tech hardware and computer software, other scientists at the museum are sequencing genomes using the collected tissues. Two years ago the National Museum of Natural History opened a 10,000 square foot molecular lab with bench space for 80 to 100 scientists. Worlwide, scientists have sequenced about 1,000 complete genomes of multicellular organisms to date. At any given time roughly 50 genomes are being sequenced in the Initiative’s lab.

Heliconius butterflies, fungus growing ants, golden frogs, the common house spider, the sable antelope, night birds and legumes are among the organisms recently sequenced by GGI staff. As technology improves sequencing becomes cheaper, easier and faster, Coddington says. In fact, GGI is working to evaluate the effectiveness of a number of these new innovations. For example, GGI staff are now collaborating with tech companies to test a new form of long-range DNA sequencing, a method that has the potential to be a break-through in how we read DNA.

One of GGI’s main objectives, one that will maximize the value of their work, is the creation of a fast, searchable and easily accessible database of genetic sequences unique to each species. Once the sequences for species are generated and digitized they can be shared with scientists and others from around the world. Such a database will dramatically change taxonomic science. 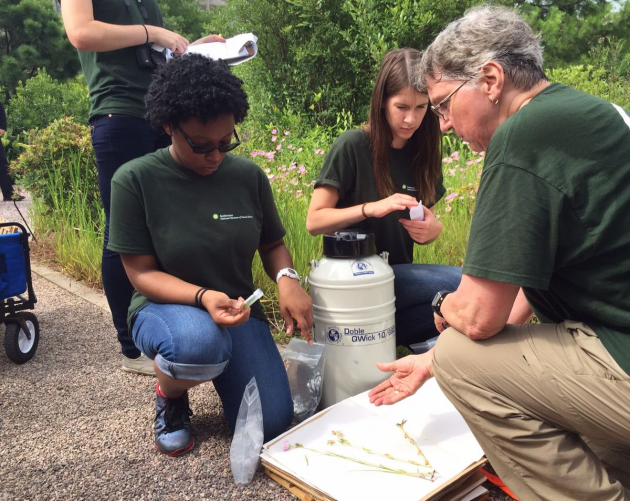 For example, Coddington says, “I’m one of the few people on earth, relatively speaking, who can identify spiders. If you want a spider identified by me, you have to bring me the dead spider, it would have to be an adult spider, and I’d have to have the time to identify it.” With a searchable database of the genomes of the world’s spiders, anyone would be able to match the DNA of a spider in their possession with its genome and instantly know its species.

Genomics applications are many. For example, metagenomics—“the latest breaking thing,” Coddington says, “is where you take multiple species of organisms and basically grind them up to make a soup of many species, extract the DNA, and sequence all of the species at the same time.” One way metagenomics is now being used at the Smithsonian is to monitor the health of the oceans.

In locations around the world the Smithsonian is setting out autonomous reef monitoring structures (ARMS), mini-condos for marine organisms, to take genomic surveys of ocean life. The structures are left in the water for about a year allowing a diversity of marine life to move in. Scientists then take the ARMS out, scrape them down and place all organisms under 2 millimeters into a blender and grind them up and extract their DNA. Creatures larger than 2 millimeters are handled individually.

An ARM recently removed from the Chesapeake Bay contained the genomes of 572,290 animals representing 1,204 species. These genome samples are archived together in the GGI Biorepository so in future scientists can compare ARM populations with ones taken today and determine if the Chesapeake’s rich diversity has changed.

To help in their work the Global Genome Initiative has recently spun off an independent organization—the Global Genome Biodiversity Network—devoted to the collection management of genomic samples. Forty institutions in 20 different countries around the world are now members of this network. “These are institutions that, like us, realize that in order to be a museum in the 21st century you need to have genomic collections,” Coddington says. To date the network holds about 183,000 samples representing about 22,000 species. Members are collaborating “in telling other members what they have got, what kind of shape is it in and asking what do we need to get?” New members join regularly.