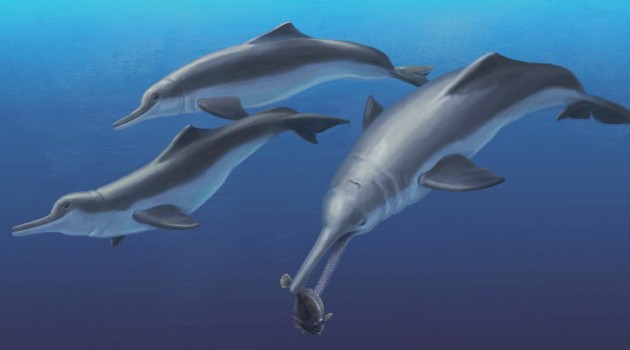 An artistic reconstruction of “Isthminia panamensis,” a new fossil dolphin from Panama, feeding on a flatfish. Many features of this new species appear similar to today’s ocean dolphins, yet the new fossil species is more closely related to the living Amazon River dolphin. The fossils of “Isthminia panamensis” were collected from marine rocks that date to a time (around 6 million years ago) before the Isthmus of Panama formed and a productive Central American Seaway connected the Atlantic and Pacific oceans. (Credit: Julia Molnar, Smithsonian Institution)

Smithsonian scientists and colleagues have discovered a new genus and species of river dolphin that has long been extinct. They made the discovery after carefully examining fossil fragments from Panama. The fossil fragments also shed new light on the evolution of today’s freshwater river dolphin species. The team’s research was published Sept. 1 in the scientific journal Peer J.

The fossil, which dates from 5.8–6.1 million years ago, was found on the Caribbean coast near the town of Piña, Panama. It consists of half a skull, lower jaw with an almost entire set of conical teeth, right shoulder blade and two small bones from the dolphin’s flipper. In comparison with other river dolphins—both fossil and living—the shape and size of these parts suggests that the full specimen may have been more than 9 feet long. 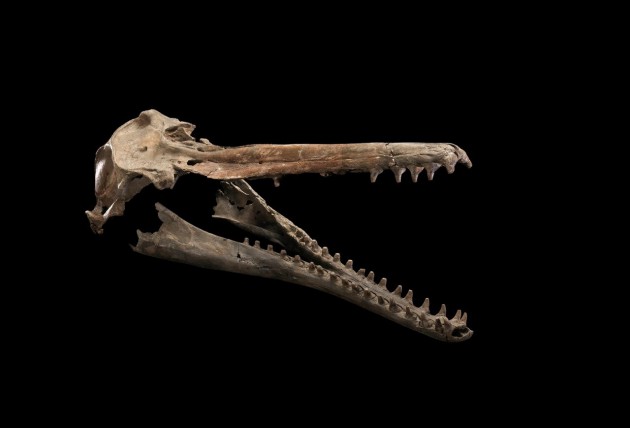 The skull and jaws of “Isthminia panamensis,” a new fossil dolphin from Panama. The specimen is housed at the Smithsonian’s National Museum of Natural History, but a painted 3D print can be viewed at the BioMuseo in Panama City, Panama. A 3D model can also be downloaded and printed from the Smithsonian X 3D website at https://3d.si.edu/browser (Credit: Donald E. Hurlbert; NMNH Imaging, Smithsonian Institution)

Today there are only four species of river dolphins―all living in freshwater or coastal ecosystems and all endangered, including the Yangtze river dolphin, which is likely now extinct. Each of the modern river dolphin species show a common solution to the problem of adapting away from marine to freshwater habitats by converging upon a body plan that includes broad, paddle-like flippers, flexible necks and heads with particularly long, narrow snouts—all the better to navigate and hunt in winding, silty rivers.

But fossil evidence suggests that river dolphins’ ancestors were widespread around the globe. I. panamensis was clearly one of them, and its fossil remains have helped the team understand something less clear: When in their evolutionary tract did river dolphins transition from the saltwater of the ocean to the freshwater of rivers?

“We discovered this new fossil in marine rocks, and many of the features of its skull and jaws point to it having been a marine inhabitant, like modern oceanic dolphins,” said the study’s lead author Nicholas D. Pyenson, curator of fossil marine mammals at the Smithsonian’s National Museum of Natural History. “Many other iconic freshwater species in the Amazon, such as manatees, turtles and stingrays have marine ancestors, but until now, the fossil record of river dolphins in this basin has not revealed much about their marine ancestry. Isthminia now gives us a clear boundary in geologic time for understanding when this lineage invaded Amazonia.” 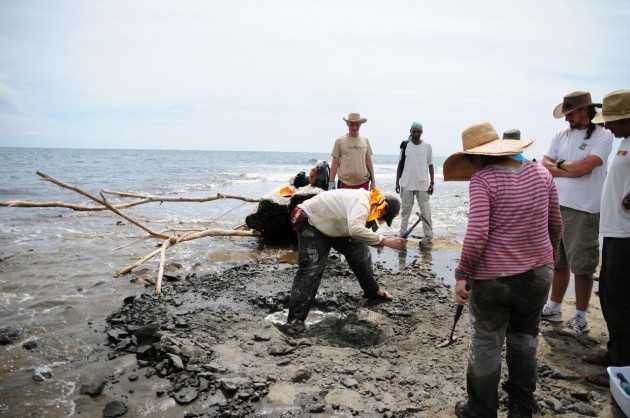 Scientists from the Smithsonian’s National Museum of Natural History and the Smithsonian Tropical Research Institute collect the fossils of “Isthminia panamensis,” a new fossil dolphin, from the Caribbean coast of Panama on 18 June 2011. The fossil was then encased in a white plaster jacket, and recovered as the tide rushed in. (Credit: Jorge Velez-Juarbe, Smithsonian)

Other fossilized animals found at the same site as I. panamensis were marine species, indicating that unlike river dolphins living today, I. panamensis lived in the salty waters of a food-rich Caribbean Sea, before the full closure of the Panama Isthmus.

“Isthminia is actually the closest relative of the living Amazon river dolphin,” said study co-author Aaron O’Dea, staff scientist at the Smithsonian Tropical Research Institute in Panama. “While whales and dolphins long ago evolved from terrestrial ancestors to fully marine mammals, river dolphins represent a reverse movement by returning inland to freshwater ecosystems. As such, fossil specimens may tell stories not just of the evolution these aquatic animals, but also of the changing geographies and ecosystems of the past.”

The Smithsonian’s Digitization Program Office collaborated with the scientific team to create a high-resolution 3-D scan of the fossil, allowing the scientists to create 3-D prints of the delicate specimen, whose bones are too fragile to be molded and casted by traditional approaches. A 3-D print of the fossil is on permanent display at Panama’s BioMuseo—the original specimen will remain in the Smithsonian’s collection at the National Museum of Natural History. The public can also explore and download high resolution scans of the dolphin’s skull, jaw and shoulder blade at the Smithsonian X 3-D website 3D.SI.EDU.

The fossil was discovered by Dioselina Vigil, then a STRI intern and student at the University of Panama. The name of the new genus, Isthminia, recognizes both the Panama Isthmus and the fossil specimen’s living relative, the Amazon river dolphin, Inia geoffrensis. The study’s authors chose the species name, panamensis, to recognize the Republic of Panama, its people, and the many generations of scientists who have studied its geological and biological histories.