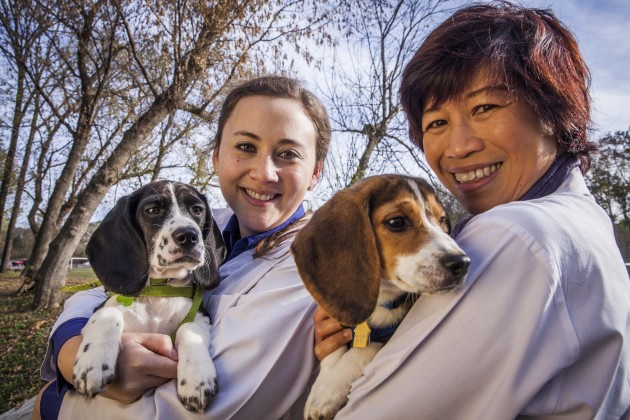 After decades of attempts, Smithsonian Conservation Biology Institute (SCBI) scientists and researchers at Cornell University have become the first to successfully use in vitro fertilization to produce live, healthy domestic puppies from cryopreserved (frozen) embryos. As part of the Cornell-Smithsonian Joint Graduate Training Program, the team published its results Dec. 9 in PLOS ONE, emphasizing the conservation implications for endangered canid species, such as maned wolves and dhole.

“The seven healthy puppies born as a result of this work represent hope for their endangered counterparts,” said Nucharin Songsasen, SCBI research biologist and co-author on the paper. “At SCBI, we collect and freeze ovarian tissue and sperm when genetically valuable individuals die. Now we are one step closer to applying in vitro technologies to endangered canids, which should ensure their survival even while the populations continue to decline in the wild.”

Developing assisted reproductive technologies for dogs, domestic or otherwise, has traditionally challenged researchers because of the animals’ unique reproductive physiology. For example, domestic dogs experience long periods of ovary inactivity and ovulate only once or twice a year. In addition, unlike most other mammals, canids release immature eggs during ovulation, rather than fully developed, mature eggs necessary for successful IVF.

Through this study, which used genetic material from beagles, Labrador retrievers and cocker spaniels, the researchers found that they could consistently fertilize the eggs via IVF when the eggs reached maturity around day six. The scientists also observed that they could bolster the sperms’ ability to penetrate and ultimately fertilize an egg by adding magnesium to the medium in which the sperm was kept. This work resulted in three successful IVF procedures. All seven puppies have so far exhibited normal behavior and growth during their first few months of life. Central to this achievement was the combination of expertise from two laboratories leading in the field of dog-reproduction research.

“Through the Cornell-Smithsonian Joint Graduate Training Program, we were able to merge Dr. Alex Travis’ knowledge of sperm physiology and Dr. Songsasen’s expertise in oocyte (egg) biology to make significant headway in this field of research,” said Jennifer Nagashima, SCBI doctoral fellow, lead author on the paper and the first student in the joint graduate training program, which was launched in 2011 to train the next generation of wildlife conservation scientists. 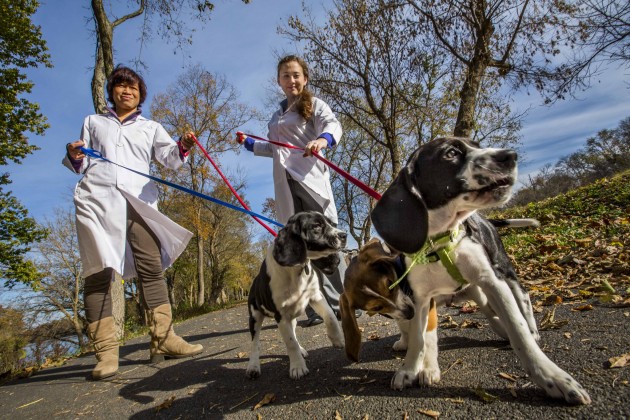 In addition to helping ensure a sustainable future for endangered populations of canids, this type of assisted reproductive technology could also help eradicate heritable disease in susceptible canid species through gene-editing technology and provide researchers with insight into genetic traits of disease common to both dogs and humans.