The practice of selectively fishing male blue crabs in the Chesapeake—intended to give females a chance to reproduce—may have a hidden cost. A Bay without enough males could reduce the number of offspring females produce, ecologists at the Smithsonian Environmental Research Center paper published in the July issue of Marine Ecology Progress Series.

Maryland and Virginia began reducing the harvest of female crabs by commercial and recreational watermen in 2008, the year officials declared the blue crab fishery a federal disaster. Since then, the crabs have shown signs of a shaky recovery. But a lasting comeback hinges on females producing enough offspring. 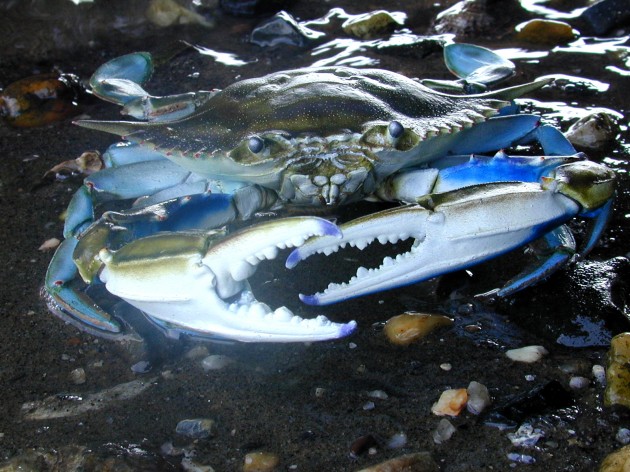 Male blue crabs can mate with multiple females. But with fewer men to go around, their female partners are left with less sperm to reproduce. (SERC image)

A female blue crab can mate for just one short period in her life, during a few days after she molts to maturity. This gives male blue crabs a very short window of time to inject her with the sperm that will fertilize the millions of eggs she will produce in the next year or two.

In a healthy population, this is not usually a problem. The odds are good that she will find a male partner with a fully stocked supply of sperm. But when male crabs decline, the males that remain mate more frequently, often before they have a chance to regenerate their sperm supply. The females are forced to make do with less.
“It would be like trying to bake eight loaves of bread and only having enough yeast for two or three,” said Matt Ogburn, a postdoctoral fellow at SERC and lead author of the study.

To find out if there is a link between fewer males and diminished sperm in females, Ogburn and a team of SERC ecologists purchased blue crabs from commercial watermen on the Rhode River. They looked exclusively at recently mated females collected between June and October of 2010. Then they compared the number of sperm in each female with each month’s operational sex ratio—the ratio of reproductively active male to female crabs in the river.The number of sperm females received was lowest in August, when the operational sex ratio hit a low point of 2.4 mature males for every nubile female. They jumped to their highest levels in the fall, when the ratio reached as high as 15 to 1.

Left: Two blue crabs mating. Right: A “sponge crab.” The sponge is a dense mass made up of millions of eggs. (SERC image)

Ogburn’s team then attempted to predict how a limited sperm supply would impact the number of broods a female crab could produce in her lifetime. In a perfect world, a female crab in the Chesapeake Bay might produce as many as eight broods of roughly 3 million eggs each in two years, totaling up to 24 million eggs. But no one is sure how many sperm per egg a female crab needs to reproduce successfully. If it’s a simple one-to-one ratio, even a drastic reduction in sperm wouldn’t do much damage, according to a model the team created. But if the necessary ratio is higher, say, 25 or more sperm cells per egg, a sperm shortage could have dire consequences. Female crabs in those scenarios might produce only one or two broods in their lives, or none.

Ogburn’s team estimated that the crabs need an average of eight sperm per egg. At this ratio, an average female in the Chesapeake likely has enough sperm to produce two to three broods, totaling 6 to 9 million eggs. Another mystery is how many females survive long enough to produce more than two to three broods of offspring. If it is a small percentage, the reductions in sperm Ogburn’s team observed may have only a minor effect on the population. On the other hand, “if female harvest restrictions are successful in protecting females long enough to reproduce in a second year, they may not have enough sperm left to continue reproducing,” Ogburn said.  “Until we know how many females are surviving to reproduce in a second year, it is hard to know how much of a problem these reductions in sperm are.”