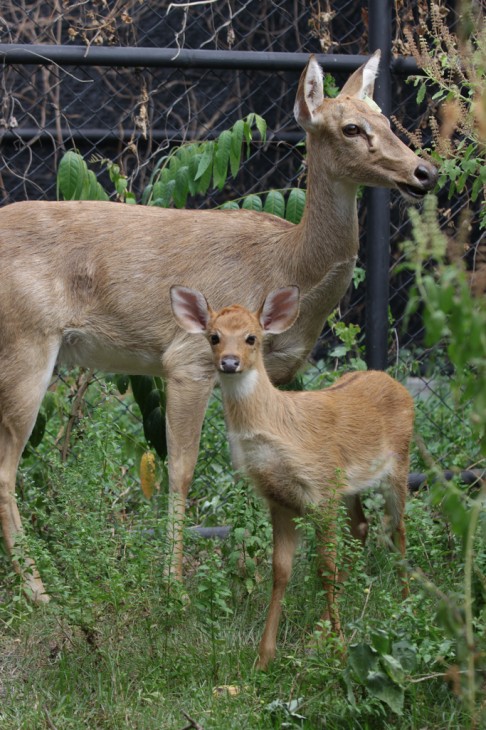 Nearly 20 years after the Smithsonian Conservation Biology Institute became the first to produce an Eld’s deer fawn through artificial insemination, SCBI scientists have now contributed to the birth of the first Eld’s deer via in vitro fertilization. The researchers collected eggs, inseminated them in vitro with thawed semen to produce embryos and transferred the embryos to a surrogate mother. A resulting fawn was born Oct. 17 at the Khao Kheow Open Zoo in Thailand.

“This gives us another important tool to help maintain genetic diversity among Eld’s deer populations under human care,” said Pierre Comizzoli, a reproductive physiologist at SCBI’s Center for Species Survival. Comizzoli oversaw the surgical procedures (laparoscopy) that resulted in the fawn and has helped train researchers in Thailand to perform in vitro fertilization. “Maintaining the genetic diversity of the population under human care is important to build up a healthy and sustainable population of animals that can be released into the wild.”

SCBI has a long history of training reproductive researchers and veterinarians working with Eld’s deer and developing scientific innovations to help conserve the species, which is considered endangered by the International Union for Conservation of Nature. There are less than 1,500 animals left in the wild as the result of habitat loss and hunting. Thailand’s Zoological Park Organization, which announced the news of the Eld’s deer fawn in a ceremony at Khao Kheow Open Zoo today, maintains a successful Eld’s deer captive breeding and reintroduction program. ZPO has worked with SCBI and AgResearch of New Zealand on in vitro fertilization and embryo transfer techniques for several years. Two Eld’s deer fawns were born through this method in 2010, but both died within 24 hours of their birth. This year’s successful birth was the result of one of eight embryo transfers performed in February 2011.