A genetic study focusing on the Central American river turtle (Dermatemys mawii) recently turned up surprising results for a team of Smithsonian scientists involved in the conservation of this critically endangered species. Small tissue samples collected from 238 wild turtles at 15 different locations across their range in Southern Mexico, Belize and Guatemala revealed a “surprising lack” of genetic structure, the scientists write in a recent paper in the journal Conservation Genetics. The turtles, which are entirely aquatic, represent populations from three different river basins that are geographically isolated by significant distance and high mountain chains. 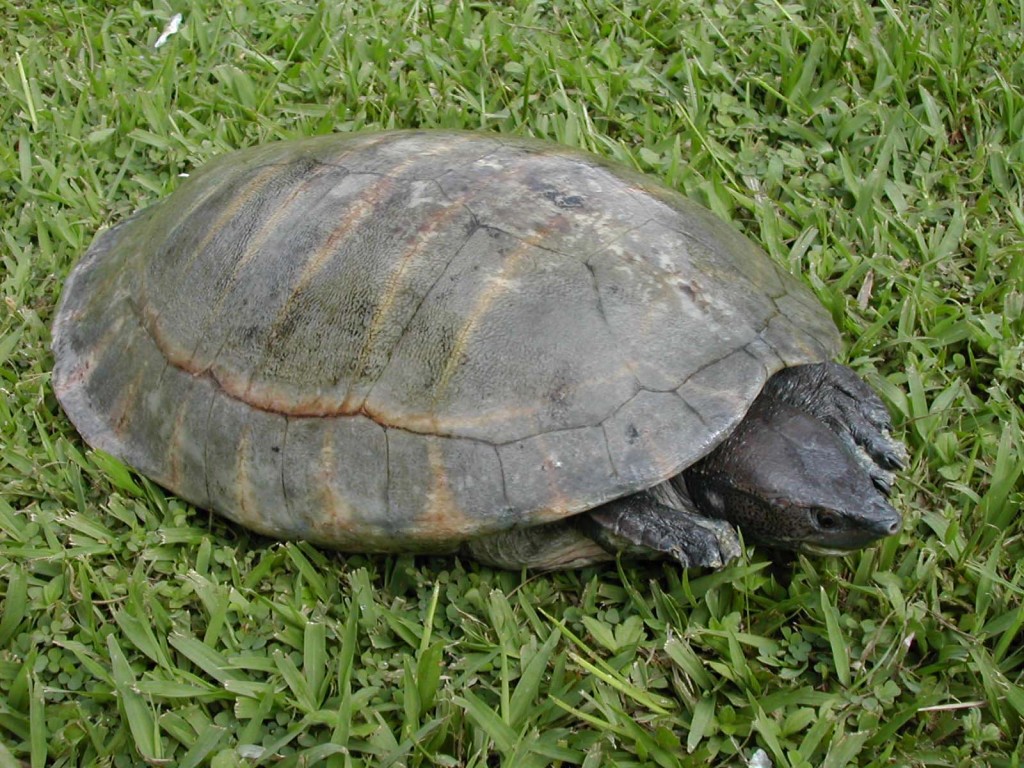 “We were expecting to find a different genetic lineage in each drainage basin,” explains the paper’s main author Gracia González-Porter of the Center for Conservation and Evolutionary Genetics at the Smithsonian Conservation Biology Institute. “Instead, we found the mixing of lineages. It was all over the place.” Despite appearing isolated, the genetic data showed the different turtle populations had been in close contact for years. “But how?” the researchers wondered.

The best possible explanation, González-Porter and her colleagues say, is that for centuries humans have been bringing them together. The turtles have been used as food, in trade and in rituals for millennia, widely transported and customarily kept in holding ponds till they were needed. 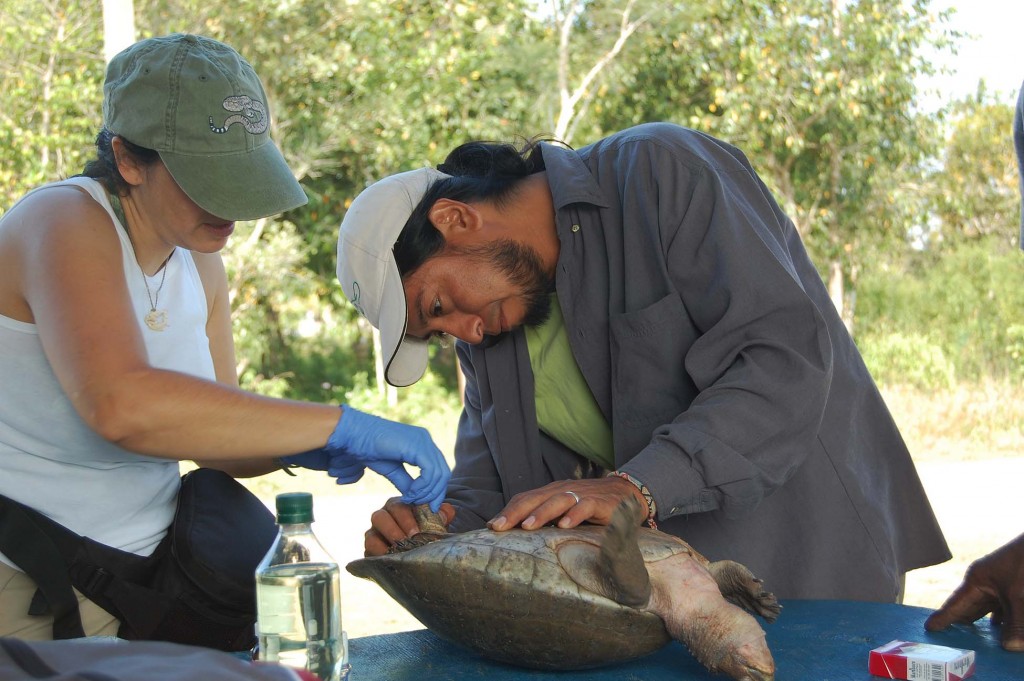 Researchers Gracia González-Porter (left) and Rene Calderon take a tiny tissue sample from between two of the rear toes of a Central American river turtle from the Belize River.

“For centuries, this species has been part of the diet of the Mayans and other indigenous people who lived in its historic distribution range,” the scientists point out in their paper. “D. mawii was a very important source of animal protein for the ancient Mayans of the Peten (Preclassic period 800-400 B.C.)…. And it is possible that these turtles were part of the diet of the Olmec culture more than 3,000 years ago.”

One specimen of D. mawii was found in an ancient Teotihuacan burial site in Mexico, a spot located more than 186 miles from the known range of this turtle, the researchers say. An ancient sculpture of a Central American riverturtle at the National Museum of Anthropology in Mexico City was found in the Basin of Mexico, more than 217 miles from the turtle’s range. 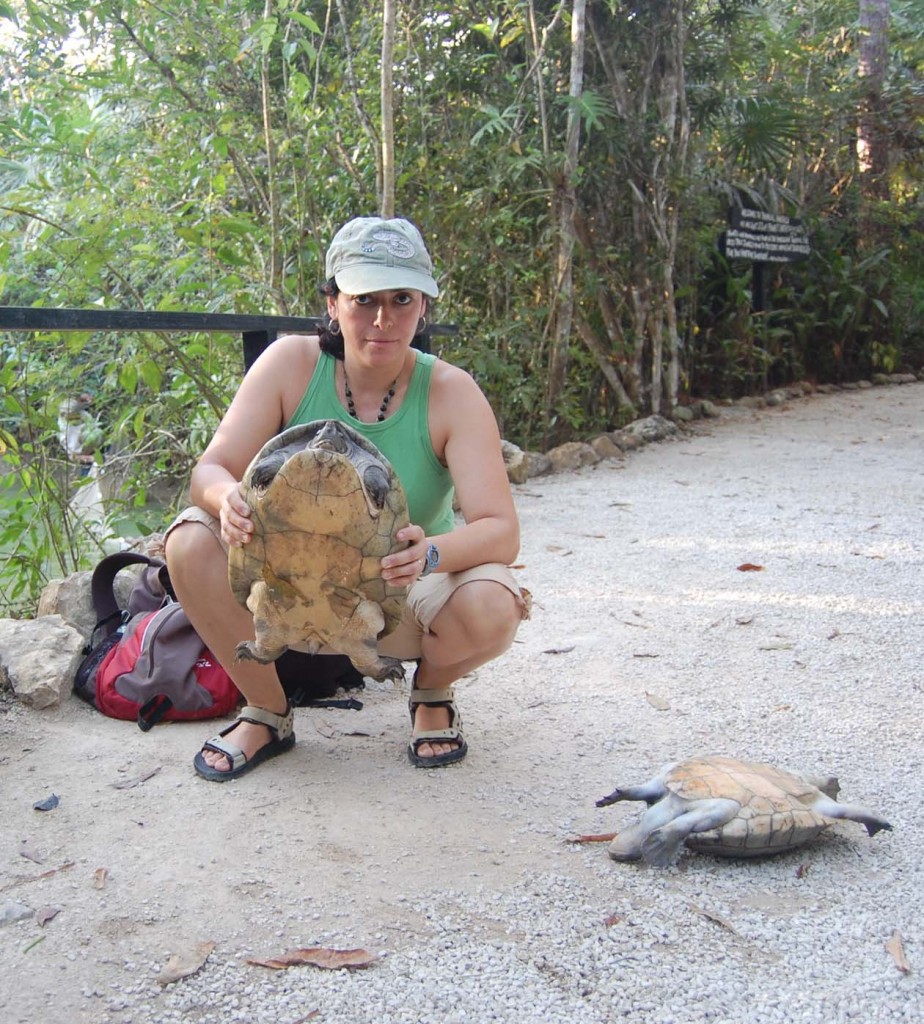 “The Central American River turtle is tame and resilient,” González-Porter explains, “which makes it easy to transport. Their shells give them lots of protection. People don’t have refrigeration so they put the turtles in ponds in their back yards.”

During the rainy season in the tropics, the water flows are huge, she says.  Rivers and ponds flood, captive turtles escape and mix with the local turtles.

This ancient practice still persists today. In Guatemala, Central American river turtles are kept in medium-sized ponds where they can be easily captured when needed. Similarly, in the State of Tabasco, Mexico, captured turtles are kept in rustic ponds and raised until they are either consumed or sold. 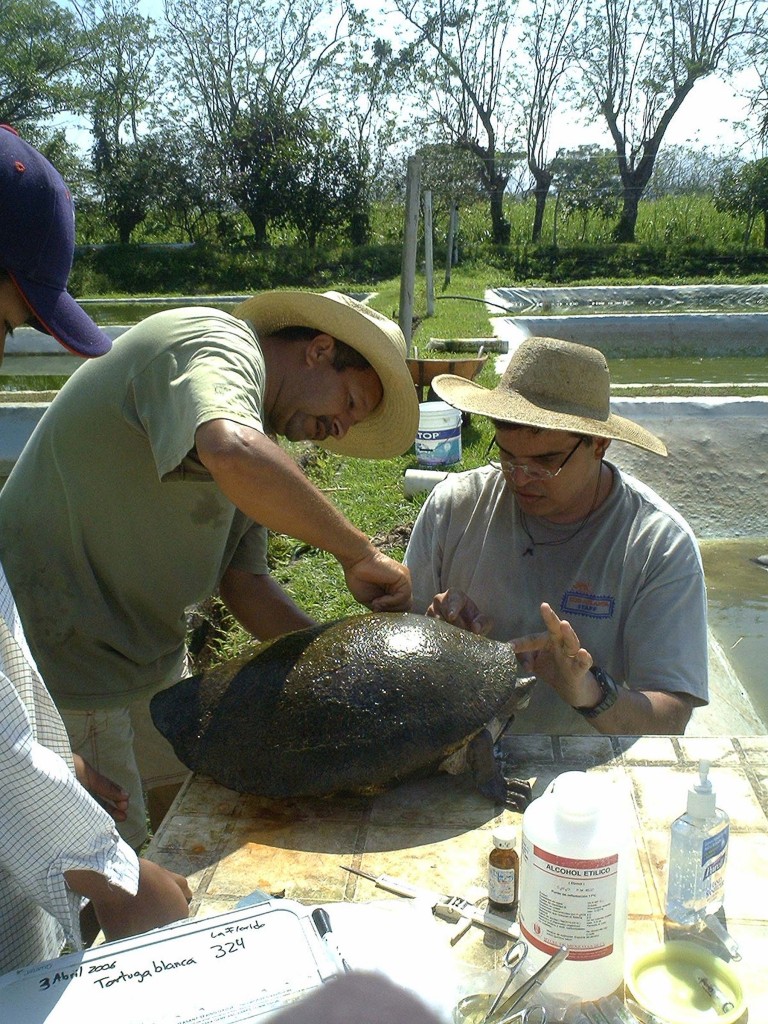 The genetic analysis of the Central American River turtle was initiated because these animals are critically endangered, González-Porter says. “They are the last surviving species of the giant river turtles of the family Dermatemydidae. D. mawii is currently the most endangered turtle species in Central America. A recent increase in the commercial demand for its meat has pushed it to the brink of extinction—2.2 pounds of their meat can fetch $100. Most local populations have disappeared and this turtle is now largely restricted to remote areas that are inaccessible to humans.