“It is strange to think of a sea turtle as an ecosystem,” says Amanda Feuerstein, program coordinator and research assistant at the Smithsonian’s National Museum of Natural History, “but they are…they have all of these other animals living on their skin and shells.” 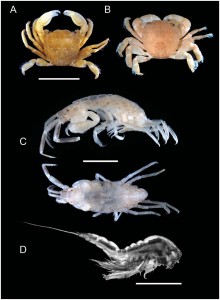 Image right: Some of the crustaceans collected from the bodies of Olive Ridley and green sea turtles during the survey.

Feuerstein is co-author of a recent survey documenting the crustaceans, mollusks, algae and other marine organisms that make a home on the bodies of Olive Ridley and green sea turtles living in the Pacific. For three years—2001, 2002 and 2008—on Teopa Beach in Jalisco, Mexico, Feuerstein and colleagues examined the shell, neck and flippers of female turtles that had come out onto the beach to nest, collecting and carefully documenting all the organisms—known as epibionts—they found. It is the first comprehensive survey on Pacific turtle epibionts, and was recently published in the Bulletin of the Peabody Museum of Natural History. The survey was organized by the Turtle Epibiont Project of the Yale Peabody Museum of Natural History. 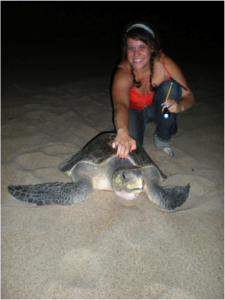 Sixteen different epibiont species were found on the turtles, Feuerstein says, including crabs, a variety of barnacles, the remora or “shark sucker,” and leeches. Most of the Pacific sea turtle epibionts are obligate—meaning they are found only on sea turtles, nowhere else.

Compared to turtles living in the Atlantic, “the Pacific turtles are coming up pretty darn clean,” says Eric Lazo-Wasme of the Peabody Museum of Natural History, lead author of the study. Similar surveys of Atlantic Ocean turtles have recorded as many as 90 epibiont species living on them. The scientists are uncertain why Pacific turtles have fewer epibionts.

“For years we considered epibionts as harmless hitchhikers on the turtles, but that opinion is starting to change,” Lazo-Wasem explains. “Barnacles in large numbers can cause significant drag on a turtle as it swims and some barnacles embed into the skin and have very long projections that pierce laterally into the skin.”  Leeches have also been shown to transmit disease.

The impetus for the survey was born out of conservation concern for sea turtles as an endangered species. Coevolutionary relationships between turtles and their epibionts, and how these relationships affect turtle health and ecology have only recently come under scrutiny, the researchers say. 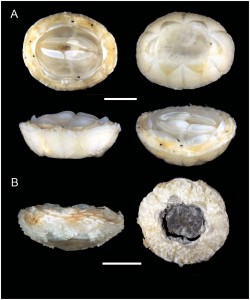 The study includes photographs of and taxonomic commentary on each of the epibiont species documented and survey instructions for future studies on how to collect epibionts from sea turtles. “We wanted to make the paper one that people could really use,” Lazo-Wasem says. “We weren’t really pleased with past surveys because there was not a lot of detail in them.”

“When we endanger animals like sea turtles many other groups of animals are affected,” Feuerstein says. “Loosing one species is more complicated and tragic” than people may realize.