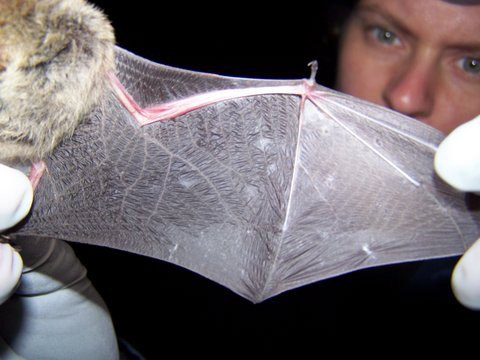 White-nose syndrome can damage bat wing tissue. Bats caught in summer may have scars or holes in the wings, evidence that the bat may have survived exposure to white-nose syndrome. (Photo by Caroline Byrne, Indiana State University)

A bat specimen collected in France at the end of World War I, since housed in the collections of the Smithsonian’s National Museum of Natural History, may hold important clues for solving the origins of a deadly fungus on a modern rampage among North American bat species.

The responsible pathogen, Pseudogymnoascus destructans, was first found on hibernating bats in New York in 2006. Known simply as Pd, it has spread to 33 states and five Canadian provinces and is estimated to have killed more than 6 million bats.

Scientists don’t know exactly where Pd came from or how it arrived here, and there is no cure for the disease it causes.

The discovery of the fungus’s DNA on the Smithsonian specimen—collected in 1918—is the oldest such sample found to date. It gives scientists a glimmer of hope that they will eventually be able to deduce if bats from Europe and Asia once suffered similar losses to what North American bats are seeing today, and what, if any, immunity may have evolved in affected bat species. 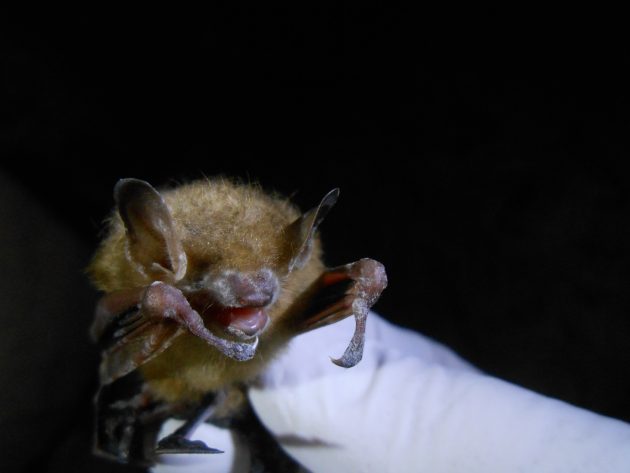 The discovery, announced in the Sept. 2017 issue of the journal Emerging Infectious Diseases, may someday help inform strategies to combat the disease, either through vaccines or other preventative measures.

The find came when a team led by Kris Helgen, formerly a curator of mammals at the Natural History Museum, sampled 138 19th- and 20th-century bat specimens from Europe, East Asia and North America in the museum. Helgen is now at the University of Adelaide in Australia.

The main aim of the sampling was simply to see if DNA from the fungus could be detected—it was, just once, on a little bat known as Bechstein’s bat (Myotis bechsteinii).

The find is surprising, although not entirely unexpected. “Pd is known to have been in Asia and Europe for a long time, but was only recently introduced to the United States,” says Michael Campana, a scientist with the Smithsonian Conservation Biology Institute’s Centers for Conservation Genomics and lead author of the study. Bats in Europe show resistance to the most lethal effects of the fungus. 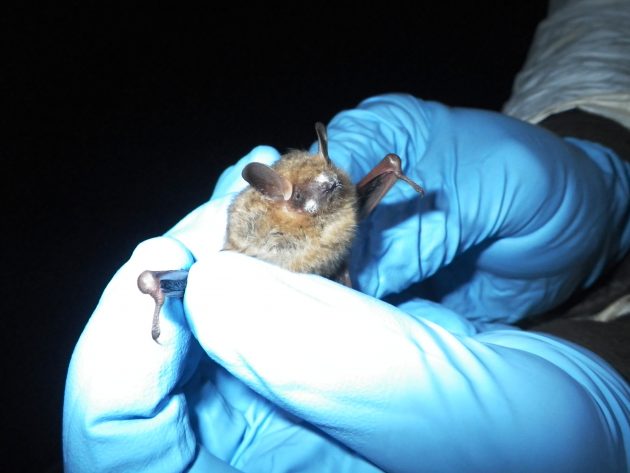 “We wanted to learn if we could determine how long it’s been in Europe, and in the past, did these animals undergo a bottleneck similar to what North American bat populations are now experiencing,” he says.

To determine that will require much more extensive testing of the European bats themselves, their immune responses and close examination of the genes responsible for immunity, Campana says. But this 100-year-old find is a start.

Campana and his team also found that Pd DNA strains from 1918 to the modern day are identical—an expected result, given that the genetic analysis only looked at 100 base pairs out of the 31 million total base pairs in the pathogen’s genome. To see how modern strains differ—how they have mutated or evolved, perhaps—from the 1918 specimen, a much more detailed genetic analysis is required, Campana adds. 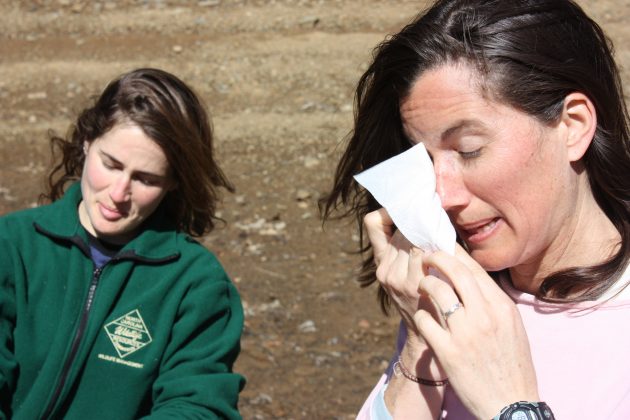 Because humans can spread white-nose syndrome researchers who enter bat caves wear Tyvek suits that are double bagged and disposed of at the end of the day. Boots, gloves, and other gear are double bagged, then decontaminated off-site using either a bleach or concentrated Lysol solution. Faces are wiped clean with the wipes also being double bagged and disposed of. Shown here are, left, Gabrielle Graeter, N.C. Wildlife Resources Commission, and Sue Cameron, U.S. Fish & Wildlife Service. (Photo by Gary Peeples/USFWS)

In susceptible bats, infection by the fungus leads to a disease known as white-nose syndrome, named for the dusty appearance bats’ muzzles take on in advanced stages of infection. The disease causes hibernating bats to arouse more frequently from their torpor, which severely depletes the stored reserves they need to survive the remainder of the hibernation season.

Infected bats often die of starvation and exhaustion when they try in vain to find insect food in winter, though the heaviest mortality usually comes in the second and third years after infection.

Those losses add up, and affect other populations: The death of every bat chips away at the $3.7 billion farmers save per year in costs related to pest damage and control. In corn alone, one study found that bats save farmers of that crop $1 billion every year. 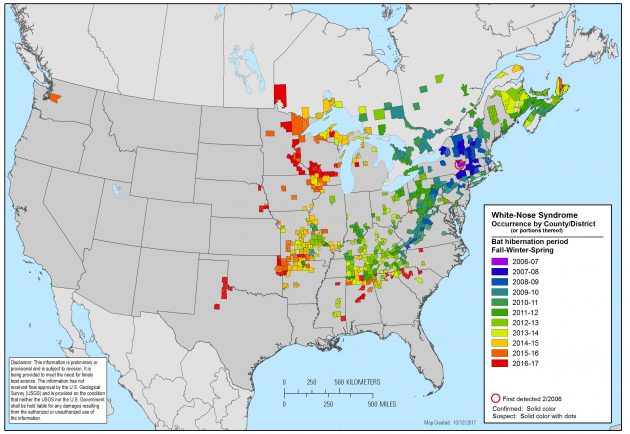 Currently, the best strategy for slowing the spread of the disease to new areas in North America is restricting humans from entering caves where bats live, especially during the winter. Because the disease doesn’t seem to affect all bats equally, biologists are still working to determine the exact mix of factors that lead to infections.

One way the infected 1918 French bat specimen may ultimately help is through the work of researchers like Jeff Foster, an evolutionary biologist at Northern Arizona University, who is tracing the overall genomic history of Pd. He is working toward assembling a “relatedness” diagram that shows how closely Pd strains from different geographic locations are related. North American strains are more closely related to each other than strains from Europe and Asia, which are far more diversified.

“Tying results from this study in with projects like Jeff Foster’s will help us to better understand the long-term dynamics of the spread of Pd,” says Jeremy Coleman, national white-nose syndrome coordinator for the U.S. Fish and Wildlife Service. “Ideally such information will help inform our efforts to manage the spread and impacts of the disease.” 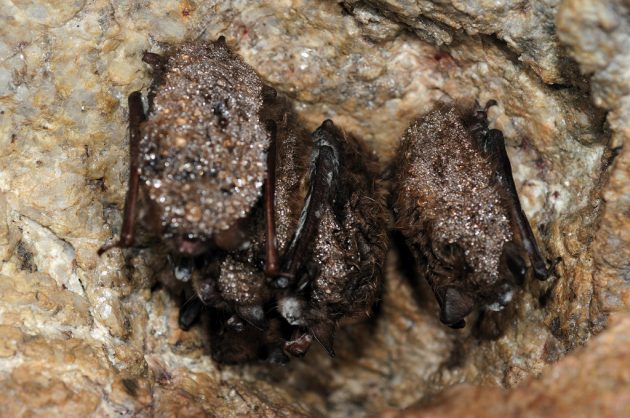 A cluster of little brown bats in Maine with white-nose syndrome (Photo by Jonathan Mays, Maine Department of Inland Fisheries and Wildlife)

It is possible that specimens housed in other museums around the world could yield similar clues. Coleman cautioned that museum samples may only be able to take researchers so far back in time. European and Asian bats may have adapted to live with the fungus thousands of years ago. Contamination with modern DNA is another stumbling block, especially if the specimens have not been carefully handled or stored.

“We’ve been grappling with this question of where Pd came from for a long time,” Coleman says. “Many have hypothesized that there may have been similar mass mortality events as the fungus spread in other parts of the world, but perhaps it all happened before people took notice. As we continue to look for answers it is great to see that museum collections may be able to help connect some of the dots.”