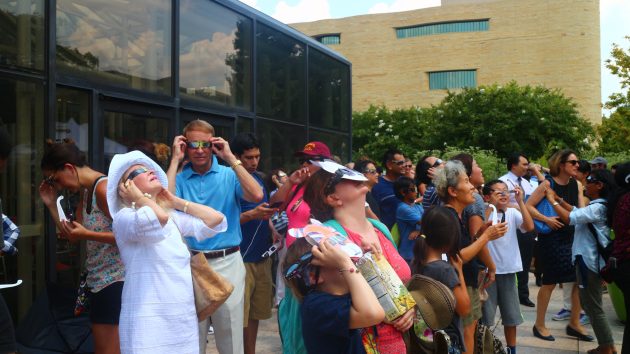 Monday, Aug. 21 was an unusual day across North America. Early in the morning, families, colleagues and tourists were searching for special solar glasses with which to watch a very special solar eclipse. Some people took the afternoon off so as not to miss this remarkable rendezvous between the sun and the moon.

Beginning at noon in Washington, D.C., crowds began heading to the Smithsonian’s National Air and Space Museum which hosted free programming throughout the day. Neither high August temperatures or long lines at the entrance of the museum discouraged visitors.

“This eclipse is a once in a lifetime experience and I just want to be a part of it,” said Nicole from Germantown, Md., standing on the stairs to the Air and Space Museum’s east terrace. “I was able to get glasses on Friday and I was really excited about it and now I am finally here to see it in person. I just came to be part of the excitement, I don’t know what to expect. I just want to see what will happen, and to be a part of the crowd and the festivities.” 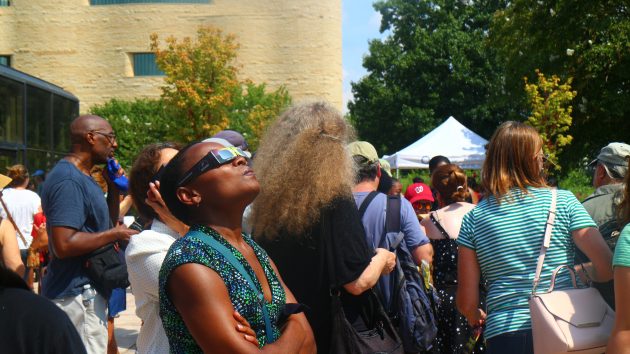 Behind Nicole, museum staff were welcoming every visitor and providing them with free eclipse viewing glasses. The museum’s Phoebe Waterman Haas Public Observatory was open to allow people to clearly, safely and closely view the sun through a solar telescope.

“It’s an amazing experience. I’m so thrilled to be able to see this. What is wonderful about this museum is they gave us glasses so we can see the eclipse without hurting our eyes. It’s such a unique experience, very special. It’s the first time for me. It’s nice to be here in a big crowd where the excitement is palpable,” said Diane who was in D.C. on a business trip from Florida.

Faces bearing eclipse glasses and huge smiles, turned to the sky in amazement as the eclipse began. Little ones and grown-ups stared up patiently at a sunny sky before seeing the shade of the moon begin encroaching into the sun’s glow at 1:40 p.m. While Washington, D.C. only experienced a partial eclipse, parts of the United States stretching in a narrow band from Lincoln City, Ore., to Charleston, S.C. witnessed a total solar eclipse. 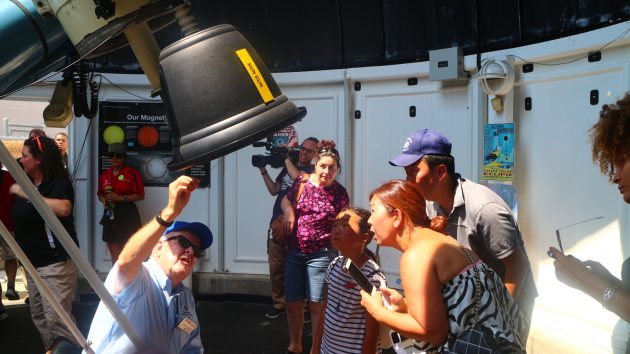 Visitors to the National Air and Space Museum view the solar eclipse through a solar telescope at the Phoebe Waterman Haas Observatory. (Photos by Guilène Assamoi)

“What is happening is that the moon is blocking the sun from view. It happens at least twice a year somewhere on the planet, but the shadow involves only on a small part of the planet and doesn’t often hit the United-States,” explained Genevieve de Messieres, NASM’s astronomy education program manager. “The last total solar eclipse visible in the United States was in 1991 in Hawaii. In Washington, D.C., we are not in the path of totality, so we’re not going to see a total eclipse but the moon is going to block most of the sun, 82 percent, from view.”

While waiting, kids and parents had the opportunity to learn more about the celestial phenomenon in real time at a booth the museum installed on the portico near the observatory. Visitors could recreate their own eclipse in a few simple steps with easy-to-use tools that projected the sun’s shape on the ground. 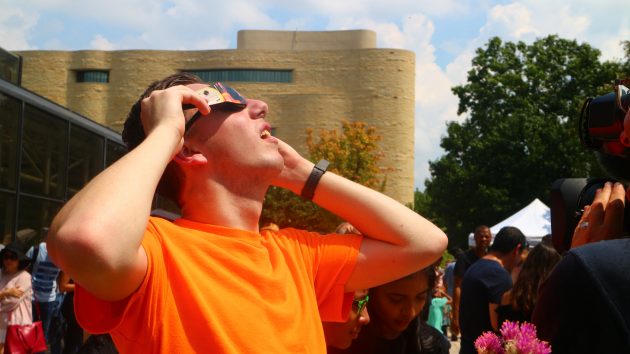 “You don’t need anything fancy to observe the eclipse. All you need is something like a pasta strainer or a straw hat, anything with holes in it that can project little spots of light on the ground. That is an easy way to observe a partial solar eclipse,” de Messieres explained to those who had gathered.

As time passed, one could also observe on the sun spotter video installed in the center of the deck, the sun being bitten by the moon. “It is like orangeish and yellowish and it is getting smaller and smaller”, contemplated Andrew, 9, from Washington D.C.

The eclipse is “a great chance for the entire country to look up and enjoy a celestial event, as well as learn about the wonders of gravity and physics and astronomy,” de Messieres says. “What we can really notice here is that we’re watching the movement of the moon. When you see the sunrise or the moonrise what you really see is the motion of the earth. The earth is rotating which means it makes things seem to spin around us. This solar eclipse is a rare opportunity for us to see the motion of another celestial body: the moon as it comes between the earth and the sun in its revolution around the earth.”

At 2:40 p.m., the sun was on the verge of being covered at a maximum amount by the moon when a cloud passed over and blocked the view. Fortunately, that moment did not last long and bystanders could see a bit more of the solar eclipse. 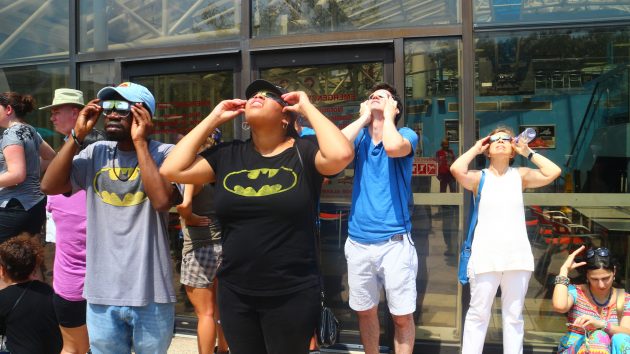 “I feel it’s insane since it happens once in 99 years and I can’t believe that I am alive to see this right now. It’s crazy. It is kind of like a ball that has been cut. It’s really cool. I think I might have had imagined it before coming here but I’ve never thought it would be like this,” said Luc, 11, from Washington, D.C.

Similar enthusiastic comments came out of the audience around the observatory as they watched with wonder.

“We heard about the eclipse a month and a half ago and decided to come to the Air and Space Museum. It is not my first time because I grew up in the Philippines and we’ve already had about two solar eclipses,” said Karine, who lives in Washington, D.C. with her two kids. “The first time I saw one I was a baby and the second time I was in high school. I was excited then and wanted to share this excitement with my kids today.”

Karine’s son, Mathew, 10, was delighted by the outing and described the event in an original way:  “It was like Pacman but also a block of cheese at the same time. It was like an alien spaceship covering up the sun,” he reported. 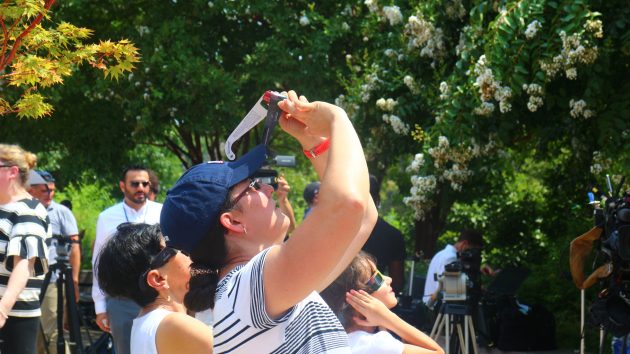 At around 3:30 p.m. the crowd began to disperse and the sky got back to its original blue color. Local residents resumed normal life and tourists continued their tours in the museum. According to Air and Space Museum staff, the next solar eclipse in the United States will be in 2024. A total solar eclipse in Washington, D.C. will occur in 2444.

“Apart from a solar eclipse, I also really love a lunar eclipse. That’s another event that we host here at the observatory,” de Messieres says.