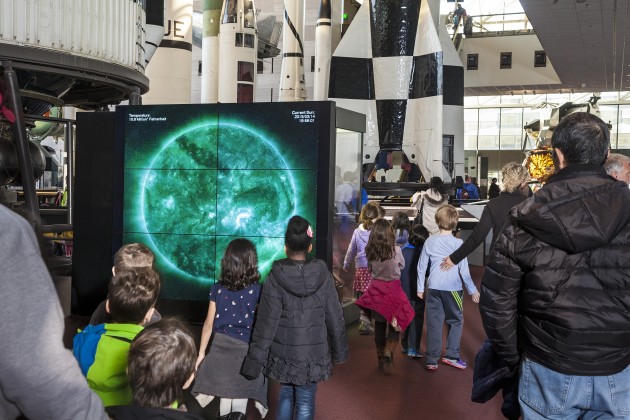 Tucked in the shadow of the towering Skylab exhibit at the Smithsonian’s National Air and Space Museum, there’s an inferno raging.

Lucky for all of us, it’s virtual, since it’s the sun that’s boiling: In deep emerald green, lava-bright orange, violet and sapphire blue, a panel of six 50-inch flatscreens show the sun’s constant motion, in never-before-seen ultra-high resolution video.

Almost without exception, visitors slow down as they pass, stop and stand agog; children tug at adults’ sleeves and point excitedly at the marble-sized Earth shown in the corner of the screen for scale.

The colors and the detail of the display are a graphic artist’s fantasy of the sun. But far from being merely a colorized computer display, the videos are real data downloaded from only a day or two before. They are compiled from images taken every 12 seconds, 24 hours a day, by the Solar Dynamics Observatory (SDO) satellite, which transmits two to three terabytes of data each day to Earth.

It’s the scale of the display that is so astounding, says David DeVorkin, senior curator of astronomy and space sciences at Air and Space. “The first time I saw it, I said, ‘Oh my God!’ and you can quote me on that,” he said.

Though it is visually arresting, DeVorkin added that the display more than hints at the heavy-hitting science going on behind the beautiful imagery.

Physics of the sun

The colored ultraviolet-spectrum videos are a byproduct of what scientists are really looking at: the physics of how the sun operates. And they themselves are seeing the entire face of the sun in this kind of detail for the first time. Although previous orbiting solar observatories had similar high-resolution capability, they could  see only very small areas of the sun’s surface at a time.  The satellite’s three instruments, by contrast, can see the sun’s full Earth-facing surface and its surrounding corona all at once, and send that information back to Earth very quickly. 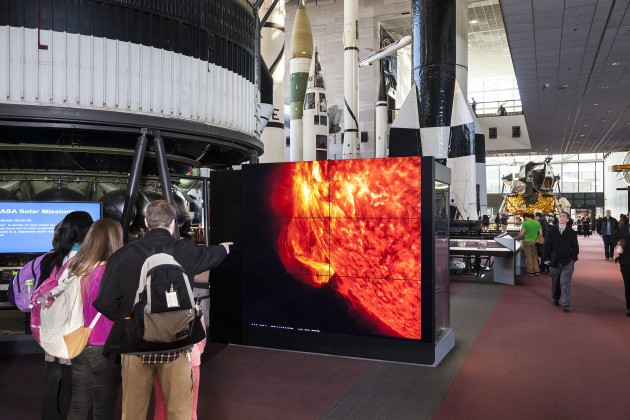 The earliest high quality, space-based research on the sun was carried out aboard Skylab in the 1970s. Skylab’s investigations showed that visible solar activity, such as solar flares, are connected with processes invisible to the human eye, in the ultraviolet, X-ray and infrared wavelengths. Again, SDO sees these processes happening all at once, a first for a solar observatory.

For practical purposes, solar observation is important so we can learn the many ways the sun influences life on Earth. Cell phone companies or the military, for example, want to know that their satellites will be safe from a burst of radiation following a solar flare, and airlines want to know if their navigation systems will work correctly in the event of unusual solar magnetic interference in the upper atmosphere.

Mark Weber, an astrophysicist at the Harvard-Smithsonian Center for Astrophysics in Cambridge, Mass., and team scientist for one of the instruments aboard SDO, said the observations are useful for creating predictive models of the sun’s behavior, but also for fundamental scientific knowledge.

“Apart from watching the sun as a source of space weather, the observatory helps with trying to understand the nature of activity as it’s emerging from the interior to the surface of the sun and then evolving in the solar atmosphere,” Weber said. “It’s an important tool in our kit for paying attention for space weather coming to Earth.”

The satellite has been orbiting for five years, but the solar wall displays are newly on public view. Weber and fellow Harvard-Smithsonian Center for Astrophysics scientist Henry Winter III developed the Air and Space Museum video wall,  and a similar exhibit at the Smithsonian’s Cooper Hewitt Design Museum in New York City. Two other displays have been operating at Goddard Space Flight Center and the  Harvard-Smithsonian Center for Astrophysics, but were accessible primarily to staff.

As a solar expert, Weber said he’s seen plenty of high-resolution pictures of the sun, but even he was stunned when he saw the large SDO photos. He hopes people who see the solar video wall get the notion that the sun isn’t just a boring yellow ball in the sky.

“To suddenly see the entire sun, and updating so fast, it blew me away,” he said. “These features and motions are going on all the time, and it was hard to appreciate that before. But now you can see the full field of view and all the fine detail.”