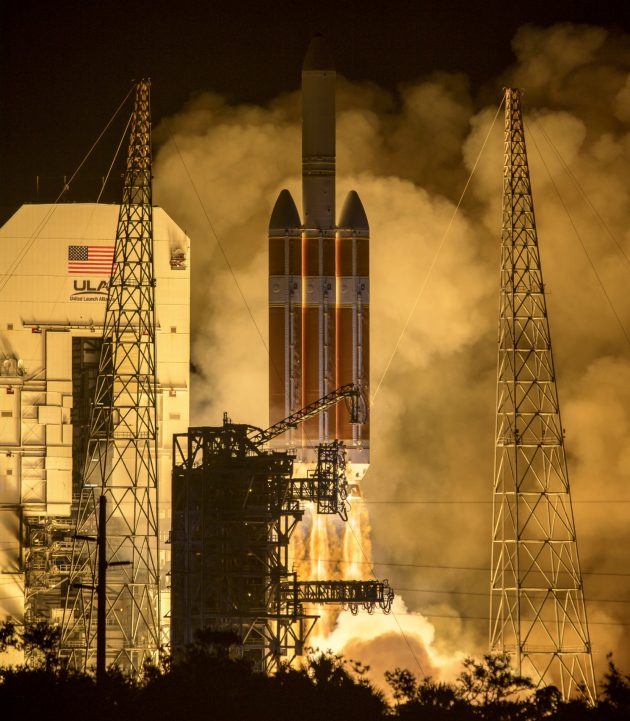 The Parker Solar Probe was launched at the Kennedy Space Center early in the morning on Sunday, August 12. It was carried aloft aboard the United Launch Alliances’ Delta IV Heavy rocket.

Smithsonian scientists have joined NASA and other organizations this summer to do something incredible: launch a spacecraft, the Parker Solar Probe, into space and have it enter the sun’s atmosphere without melting. Not only that, but it will communicate with scientists on Earth, recording and sharing vital information about our star.

Scientists hope this data will solve mysteries and answer questions that, up until now, have left us, well…in the dark.

This will be the first man made object to touch the sun. Tony Case, an astrophysicist at the Smithsonian Astrophysical Observatory in Cambridge, Mass., answered some questions to shine light on the Parker Solar Probe and the Smithsonian’s contribution to the project. Case and his team have been working on the Parker Solar Probe for the past nine years.

Q: This spacecraft is going to touch the Sun. How is that possible without it melting? 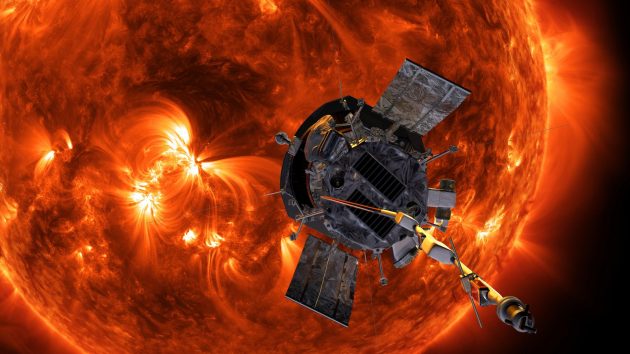 Case: The spacecraft is very carefully designed to keep each individual component below its melting temperature. Primarily, this is accomplished through the use of the spacecraft’s Thermal Protection System that provides a large shadowed area for the bulk of the spacecraft. Instruments and subsystems are kept in this shadow at relatively benign temperatures (say, less than 100 degrees Celsius [212 degrees Fahrenheit]).

There are a couple instruments that peek out from around the Thermal Protection System and are exposed directly to sunlight. Those instruments use materials such as niobium, molybdenum, titanium and sapphire that have very high melting temperatures, and so they are able to operate while they are extremely hot.

Q: What was the role of the Smithsonian Astrophysical Observatory in this project? 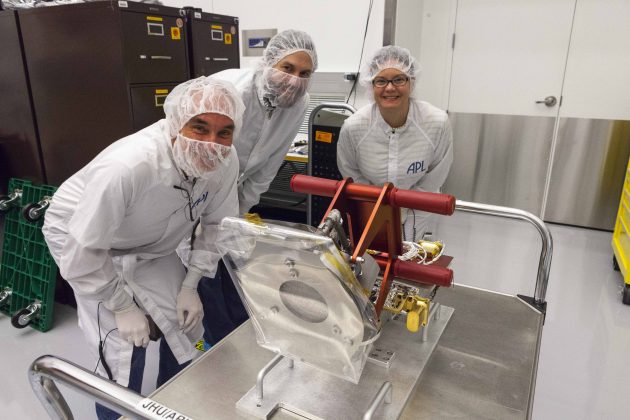 Getting ready to attach the solar probe cup to the Parker Solar Probe are, left to right: Chris Scholz, University of California Berkeley; SPC instrument scientist Tony Case of the Smithsonian Astrophysical Observatory; and and SWEAP head of science operations Kelly Korreck of the Smithsonian Astrophysical Observatory. (Photo by www.andrewtakesphotos.com)

Q: What makes the Solar Probe Cup different from the other instruments on the probe?

Case: The Solar Probe Cup is one of the few things on the spacecraft that will be exposed directly to sunlight. Due to that environment, the cup has to operate while it is extremely hot. [The surface of the sun is 10,000 degrees Fahrenheit.] That meant that all of the materials we used had to be very carefully chosen to ensure that they continue to perform throughout the mission.

We also had to build a custom test chamber so that we could expose the instrument to a flight-like environment. We used re-purposed IMAX film projectors to produce an extremely intense light beam inside a vacuum chamber. In that way, we were able to heat up the Solar Probe Cup and show that it could still make measurements while it was extremely hot.

Q: What will the Solar Probe Cup measure or record?

Case: The Solar Probe Cup will measure ions and electrons in the solar wind, which is a supersonic stream of particles that is continuously flowing outward away from the sun. These particles then impact the Earth (and all other bodies in solar system) and are the source of what we call “space weather,” which can negatively affect the power grid, GPS signals and spacecraft in orbit around Earth. 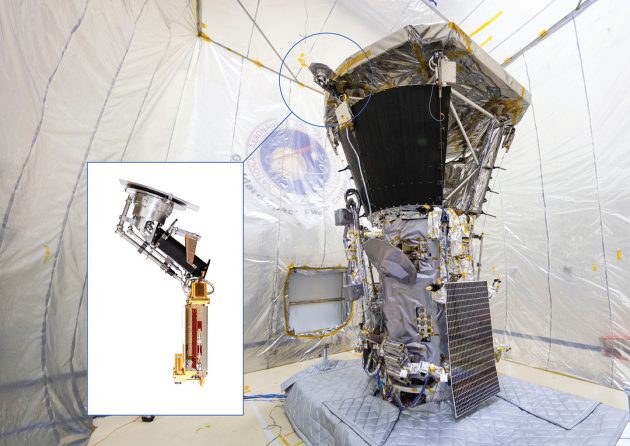 The Parker Solar Probe in the clean room with a close-up view of the solar probe cup in the inset. The location of the SPC on the probe, as it peers around the heat shield, is also shown. (Photo courtesy NASA/John Hopkins APL/Ed Whitman and Smithsonian Astrophysical Observatory/ Tony Case)

These solar wind particles will flow into our cup and the sensitive electronics measure how many of the particles there are and how fast they are moving. These data tell us about the density, temperature and velocity of the solar wind (much like a weather station does for wind here on Earth).

Q: Why is it important for us to know this data?

Case: These particles can directly cause “space weather” events. But the purpose of this mission is much more than just a monitor of solar wind activity.

Our objective is to go to the source of the solar wind (the atmosphere of the sun that we call the “corona”) and find out what is causing the corona to be so hot and how the solar wind is being accelerated. Understanding these basic physical phenomena will enable us to improve our models of how the entire solar system works.

And because our sun is the only star we can visit, this mission will also help us understand how all of the other stars in the universe function. 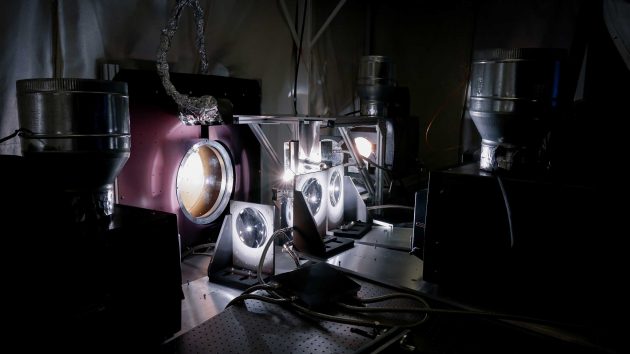 The Parker Solar Probe in the clean room with a close-up view of the solar probe cup in the inset. The location of the SPC on the probe, as it peers around the heat shield, is also shown. (Photo courtesy NASA/John Hopkins APL/Ed Whitman and Smithsonian Astrophysical Observatory/Tony Case)

Q: How long will the Parker Solar Probe be active?

Case: The Parker Solar Probe will make 24 orbits of the sun over the next seven years. Through the use of gravity assists [using a planet or satellite’s orbit to change a spacecraft’s momentum] from the planet Venus, we slowly spiral our way closer to the sun. Our final three orbits will bring us to our closest approach and the spacecraft will be 95 percent of the way to the sun. During each orbit we will accumulate data, and then about once per orbit we send all of those data back to Earth.

Eventually, however, we will run out of fuel and the spacecraft will no longer be able to point in the right direction. It will rotate in a way that will cause critical components to melt and evaporate away, leaving only a small portion of the high-temperature materials to continue orbiting the sun until the end of the solar system.

Q: Shooting technological instruments into the sun’s atmosphere and having them work seems impossible, and yet it’s happening. What’s next for solar science?

Case: The great thing about working on a mission like Parker Solar Probe is that we will be going to a brand new environment that no mission has ever visited before. Of course we have some idea of what we’re going to find there, but the really exciting prospect is that we will uncover things we had never even considered! I expect that Parker Solar Probe will raise as many new questions as it will answer. The knowledge we gain from this mission will have a great impact on the direction that future solar science investigations take.