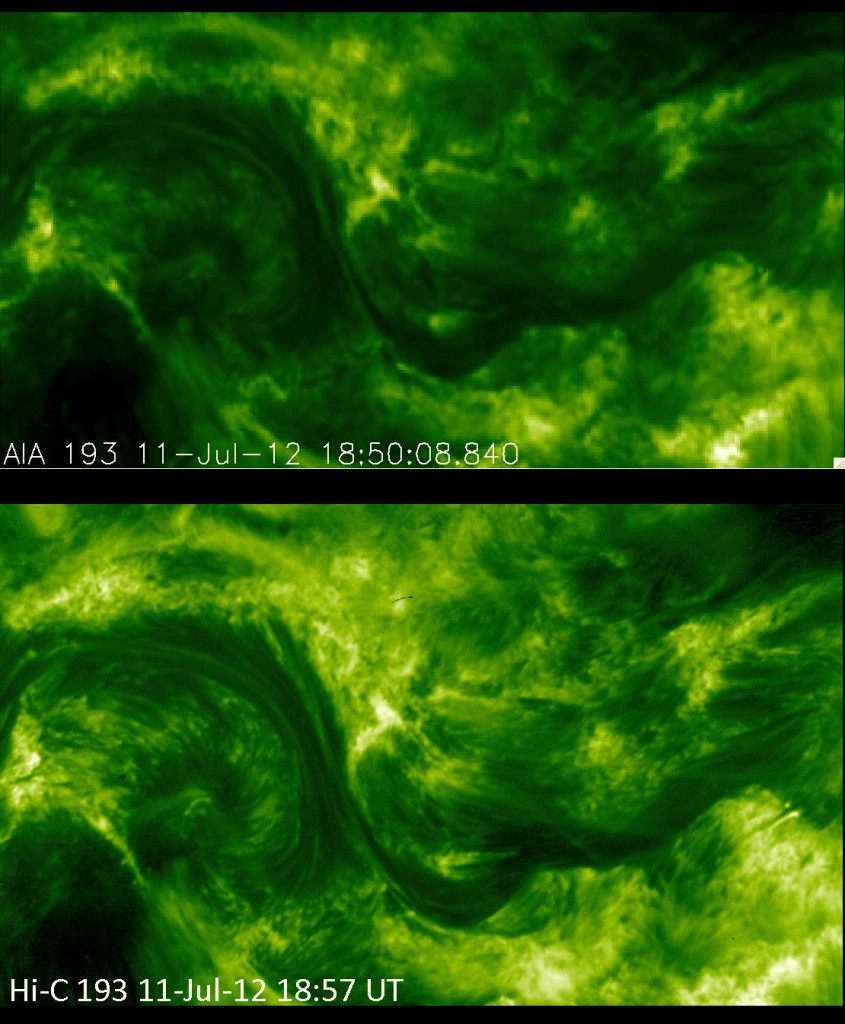 These photos of the solar corona, or million-degree outer atmosphere, show the improvement in resolution offered by NASA’s High Resolution Coronal Imager, or Hi-C (bottom), versus the Atmospheric Imaging Assembly on NASA’s Solar Dynamics Observatory (top). Both images show a portion of the sun’s surface roughly 85,000 by 50,000 miles in size. Hi-C launched on a sounding rocket on July 11, 2012 in a flight that lasted about 10 minutes. The representative-color images were made from observations of ultraviolet light at a wavelength of 19.3 nanometers (25 times shorter than the wavelength of visible light). Credit: NASA

Today, astronomers are releasing the highest-resolution images ever taken of the Sun’s corona, or million-degree outer atmosphere, in an extreme-ultraviolet wavelength of light. The 16-megapixel images were captured by NASA’s High Resolution Coronal Imager, or Hi-C, which was launched on a sounding rocket on July 11th. The Hi-C telescope provides five times more detail than the next-best observations by NASA’s Solar Dynamics Observatory.

“Even though this mission was only a few minutes long, it marks a big breakthrough in coronal studies,” said Smithsonian astronomer Leon Golub (Harvard-Smithsonian Center for Astrophysics), one of the lead investigators on the mission.

Understanding the Sun’s activity and its effects on Earth’s environment was the critical scientific objective of Hi-C, which provided unprecedented views of the dynamic activity and structure in the solar atmosphere.

Video: This time-lapse movie shows activity in the sun’s corona on July 11, 2012, with 10 minutes compressed into 10 seconds. It begins with images from the Atmospheric Imaging Assembly on board NASA’s Solar Dynamics Observatory. About three seconds in, the view switches to super-high-resolution photos of the same region from NASA’s High Resolution Coronal Imager. Hi-C flew on a sounding rocket and only took data for about five minutes, so the view switches back to AIA data at the end. The representative-color images were made from observations of ultraviolet light at a wavelength of 19.3 nanometers (25 times shorter than the wavelength of visible light). Credit: NASA

The corona surrounds the visible surface of the Sun. It’s filled with million-degree ionized gas, or plasma, so hot that the light it emits is mainly at X-ray and extreme-ultraviolet wavelengths. For decades, solar scientists have been trying to understand why the corona is so hot, and why it erupts in violent solar flares and related blasts known as “coronal mass ejections,” which can produce harmful effects when they hit Earth. The Hi-C telescope was designed and built to see the extremely fine structures thought to be responsible for the Sun’s dynamic behavior.

“The phrase ‘think globally, act locally’ applies to the Sun too. Things happening at a small, local scale can impact the entire Sun and result in an eruption,” explained Golub.

Hi-C focused on an active region on the Sun near sunspot NOAA 1520. The target, which was finalized on launch day, was selected specifically for its large size and active nature. The resulting high-resolution snapshots, at a wavelength of 19.3 nanometers (25 times shorter than the wavelength of visible light), reveal tangled magnetic fields channeling the solar plasma into a range of complex structures.

“We had the right instrument and launched at the right time,” said Jonathan Cirtain, senior heliophysicist at NASA’s Marshall Space Flight Center. “Because of the intense solar activity we’re seeing right now, we were able to clearly focus on a sizeable, active sunspot and achieve our imaging goals.”

Since Hi-C rode on a suborbital rocket, its flight lasted for just 10 minutes. Of that time, only about 330 seconds were spent taking data. Yet those images contain a wealth of information that astronomers will analyze for months to come.

“The Hi-C flight might be the most productive five minutes I’ve ever spent,” Golub smiled.

The high-resolution images were made possible because of a set of innovations on Hi-C’s telescope, which directs light to the camera detector. The telescope includes some of the finest mirrors ever made for a space mission. Initially developed at NASA’s Marshall Space Flight Center in Huntsville, Ala., the mirrors were completed with inputs from partners at the Smithsonian Astrophysical Observatory (SAO) in Cambridge, Mass., and a new manufacturing technique developed in coordination with L-3Com/Tinsley Laboratories of Richmond, Calif. The mirrors were made to reflect extreme-ultraviolet light from the Sun by Reflective X-ray Optics LLC of New York, NY, and the telescope was assembled at the SAO labs in Cambridge, Mass.