During a total eclipse of the Sun, skywatchers are awed by the shimmering corona — a faint glow that surrounds the Sun like gossamer flower petals. This outer layer of the Sun’s atmosphere is, paradoxically, hotter than the Sun’s surface, but so tenuous that its light is overwhelmed by the much brighter solar disk. The corona becomes visible only when the Sun is blocked, which happens for just a few minutes during an eclipse. 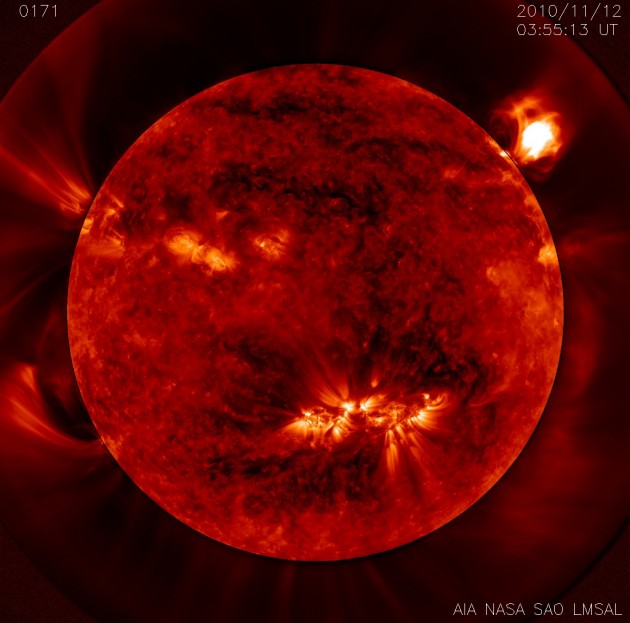 This photograph of the Sun, taken by the Atmospheric Imaging Assembly instrument on NASA’s Solar Dynamics Observatory, shows how image processing techniques developed at SAO can reveal the faint, inner corona. Bright active regions like the one on the Sun’s face at lower center are often the source of huge eruptions known as coronal mass ejections. (Image by NASA/LMSAL/SAO)

Now, an instrument on board NASA’s Solar Dynamics Observatory (SDO), developed by Smithsonian scientists, is giving unprecedented views of the innermost corona 24 hours a day, 7 days a week.

“We can follow the corona all the way down to the Sun’s surface,” said Leon Golub of the Harvard-Smithsonian Center for Astrophysics (CfA).

Previously, solar astronomers could observe the corona by physically blocking the solar disk with a coronagraph, much like holding your hand in front of your face while driving into the setting Sun. However, a coronagraph also blocks the area immediately surrounding the Sun, leaving only the outer corona visible.

The Atmospheric Imaging Assembly (AIA) instrument on SDO can “fill” this gap, allowing astronomers to study the corona all the way down to the Sun’s surface. The resulting images highlight the ever-changing connections between gas captured by the Sun’s magnetic field and gas escaping into interplanetary space.

The Sun’s magnetic field molds and shapes the corona. Hot solar plasma streams outward in vast loops larger than Earth before plunging back onto the Sun’s surface. Some of the loops expand and stretch bigger and bigger until they break, belching plasma outward.

Cranmer and CfA colleague Alec Engell developed a computer program for processing the AIA images above the Sun’s edge. These processed images imitate the blocking-out of the Sun that occurs during a total solar eclipse, revealing the highly dynamic nature of the inner corona. They will be used to study the initial eruption phase of coronal mass ejections (CMEs) as they leave the Sun and to test theories of solar wind acceleration based on magnetic reconnection.

SDO is the first mission and crown jewel in a fleet of NASA missions to study our sun. The mission is the cornerstone of a NASA science program called Living with a Star, the goal of which is to develop the scientific understanding necessary to address those aspects of the sun-Earth system that directly affect our lives and society. Goddard Space Flight Center built, operates, and manages the SDO spacecraft for NASA’s Science Mission Directorate in Washington.