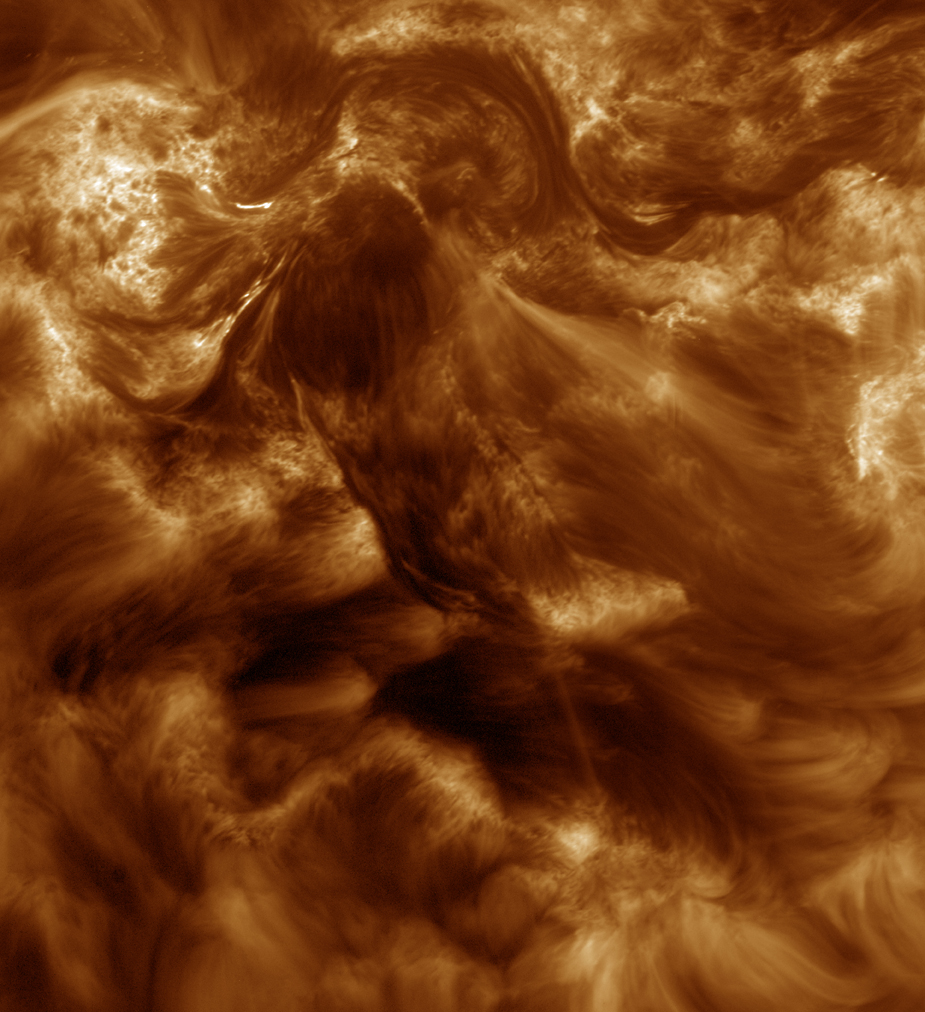 This is one of the highest-resolution images ever taken of the solar corona, or outer atmosphere. It was captured by NASA’s High Resolution Coronal Imager, or Hi-C, in the ultraviolet wavelength of 19.3 nanometers.

The Sun’s visible surface, or photosphere, is 10,000 degrees Fahrenheit. As you move outward from it, you pass through a tenuous layer of hot, ionized gas or plasma called the corona. The corona is familiar to anyone who has seen a total solar eclipse, since it glimmers ghostly white around the hidden Sun.

But how can the solar atmosphere get hotter, rather than colder, the farther you go from the Sun’s surface? This mystery has puzzled solar astronomers for decades. Now, a suborbital rocket mission that launched in July 2012 has just provided a major piece of the puzzle.

The High-resolution Coronal Imager, or Hi-C, revealed one of the mechanisms that pumps energy into the corona, heating it to temperatures up to 7 million degrees F. The secret is a complex process known as magnetic reconnection.

“This is the first time we’ve had images at high enough resolution to directly observe magnetic reconnection,” explained Smithsonian astronomer Leon Golub (Harvard-Smithsonian Center for Astrophysics). “We can see details in the corona five times finer than any other instrument.”

“Our team developed an exceptional instrument capable of revolutionary image resolution of the solar atmosphere. Due to the level of activity, we were able to clearly focus on an active sunspot, thereby obtaining some remarkable images,” said heliophysicist Jonathan Cirtain (Marshall Space Flight Center). 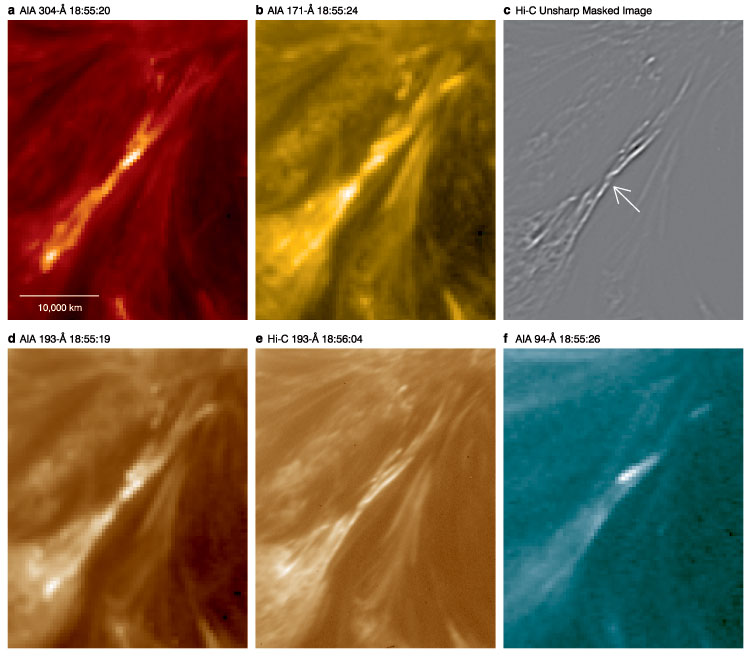 Hi-C also detected an area where magnetic field lines crossed in an X, then straightened out as the fields reconnected. Minutes later, that spot erupted with a mini solar flare. Images of the same location taken with the Atmospheric Imaging Assembly (AIA) aboard the Solar Dynamics Observatory show the superior resolution of Hi-C. Credit: NASA

The Sun’s activity, including solar flares and plasma eruptions, is powered by magnetic fields. The Sun’s surface is like a collection of thousand-mile-long magnets scattered around after bubbling up from inside the Sun. Magnetic fields poke out of one spot and loop around to another spot. Plasma flows along those fields, outlining them with glowing threads.

The images from Hi-C showed interweaved magnetic fields that were braided just like hair. When those braids relax and straighten, they release energy. Hi-C witnessed one such event during its flight.

It also detected an area where magnetic field lines crossed in an X, then straightened out as the fields reconnected. Minutes later, that spot erupted with a mini solar flare.

Hi-C showed that the Sun is dynamic, with magnetic fields constantly warping, twisting, and colliding in bursts of energy. Added together, those energy bursts can boost the temperature of the corona to 7 million degrees F when the Sun is particularly active.

The telescope aboard Hi-C provided a resolution of 0.2 arcseconds – about the size of a dime seen from 10 miles away. That allowed astronomers to tease out details just 100 miles in size. (For comparison, the Sun is 865,000 miles in diameter.)

Hi-C photographed the Sun in ultraviolet light at a wavelength of 19.3 nanometers – 25 times shorter than wavelengths of visible light. That wavelength is blocked by Earth’s atmosphere, so to observe it astronomers had to get above the atmosphere. The rocket’s suborbital flight allowed Hi-C to collect data for just over 5 minutes before returning to Earth.

Hi-C could only view a portion of the Sun, so the team had to point it carefully. And since the Sun changes hourly, they had to select their target at the last minute – the day of the launch. They chose a region that promised to be particularly active.

“We looked at one of the largest and most complicated active regions I’ve ever seen on the Sun,” said Golub. “We hoped that we would see something really new, and we weren’t disappointed.”

Golub said that data from Hi-C continues to be analyzed for more insights. Researchers are hunting areas where other energy release processes were occurring.

In the future, the scientists hope to launch a satellite that could observe the Sun continuously at the same level of sharp detail.

“We learned so much in just five minutes. Imagine what we could learn by watching the Sun 24/7 with this telescope,” said Golub.