The National Aeronautics and Space Administration has made available to the public a new online collection of images of our solar system and places on Earth where astrobiology researchers travel to conduct field research.

Called “From Earth to the Solar System,” or FETTSS, the images on the Website capture the excitement of planetary exploration and the journey to understand the origin and evolution of the solar system, and the search for life beyond Earth. The online collection will allow interested individuals, groups, and organizations to plan and create their own solar system exhibits. The stunning high-resolution mages may be downloaded free of charge, reproduced and displayed with the proper photo credit.

Craters, craters everywhere! Mercury is extreme. Of all the rocky planets in our Solar System, it’s the smallest and densest, it has the oldest surface and the largest daily variations in surface temperature, and, until now, it was the least explored. NASA’s Mercury Surface, Space Environment, Geochemistry, and Ranging spacecraft, which inserted into Mercury’s orbit in March, 2011, will change all that!  This false-color image prominently features Caloris Basin, one of the largest impact basins in the Solar System. (Image Credit: NASA/Johns Hopkins University Applied Physics Laboratory/Arizona State University/Carnegie Institution of Washington) 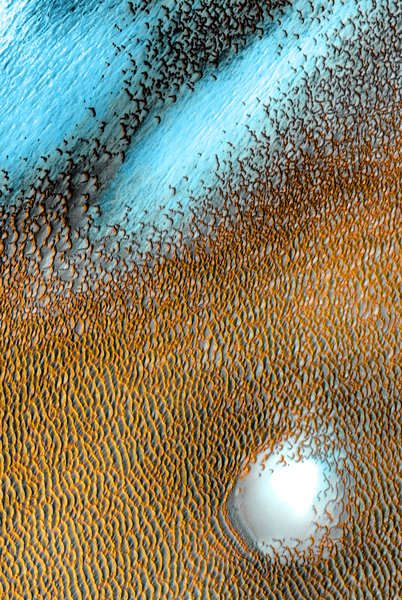 Dunes at the Martian North Pole. A sea of dunes, sculpted by the wind into long lines, surrounds the northern polar cap of Mars, covering an area as big as Texas. In this false-color image, areas with cooler temperatures are recorded in blue tints, while warmer features are depicted in yellows and oranges. This scene combines images taken between 2002—2004 by the Thermal Emission Imaging System (THEMIS) instrument onboard NASA’s Mars Odyssey orbiter. In December, 2010, Mars Odyssey became the longest-serving spacecraft at the Red Planet. Image Credit: NASA/JPL-Caltech/Arizona State University, Thermal Emission Imaging System (THEMIS)

“From Earth to the Solar System” is a collaboration between NASA Ames Research Center’s Astrobiology Institute in Moffett Field, Calif., and the Smithsonian Astrophysical Observatory in Cambridge, Mass. The Website was created to celebrate NASA’s Year of the Solar System — a time of unprecedented planetary science mission activity. The celebration runs from October 2010 through August 2012.

A NASA-sponsored traveling version of the collection is planned for display at several U.S. locations. This summer, the exhibit will be featured at various locations around the world.