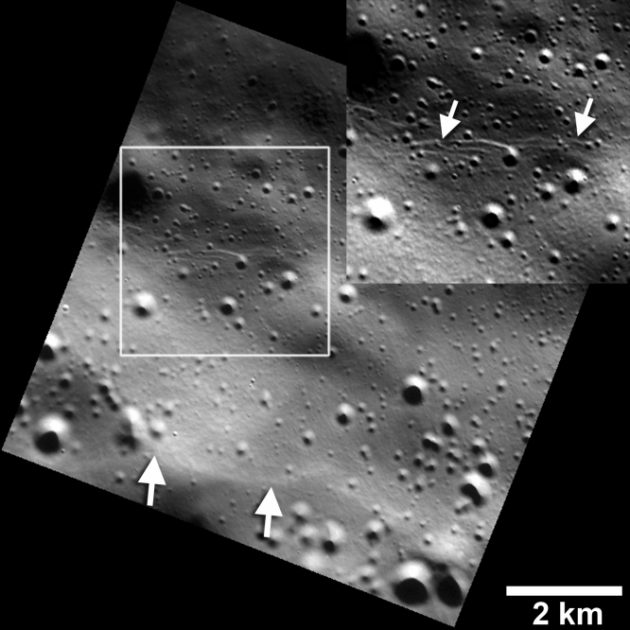 Small graben, narrow linear troughs, have been found associated with small scarps (lower white arrows) on Mercury, and on the Moon. The small graben, only tens of meters wide (inset box and upper white arrows), likely resulted from the bending of the crust as it was uplift in response to scarp formation. On the basis of the rate of degradation and infilling of small troughs on the Moon by continuous meteoroid bombardment, small lunar graben and their associated scarps are less than 50 Myr old. It is likely that Mercury’s small graben and their associated scarps are younger still, because the cratering rate on Mercury is a factor of 3 greater than on the Moon. (Credit: NASA/Johns Hopkins University Applied Physics Laboratory/Carnegie Institution of Washington/Smithsonian Institution)

Images obtained by NASA’s MErcury Surface, Space ENvironment, GEochemistry and Ranging (MESSENGER) spacecraft during the low-altitude orbital phase of the mission have revealed previously undetected small fault scarps. The young scarps indicate that Mercury is likely still contracting today, which means that Earth is not the only tectonically active planet as previously thought. The findings are reported in a paper led by Smithsonian senior scientist Thomas R. Watters, scheduled for publication in the October issue ofNature Geoscience.

The paper, “Recent tectonic activity on Mercury revealed by small thrust fault scarps,” explains that these newly found scarps are so small that they must be very young. Although they are small, they have big implications for the geologic evolution of Mercury.

“The young age of the small scarps means that Mercury joins Earth as a tectonically active planet in our solar system, with new faults likely forming today as Mercury’s interior continues to cool and the planet contracts,” said Watters of the Center for Earth and Planetary Studies at the National Air and Space Museum. 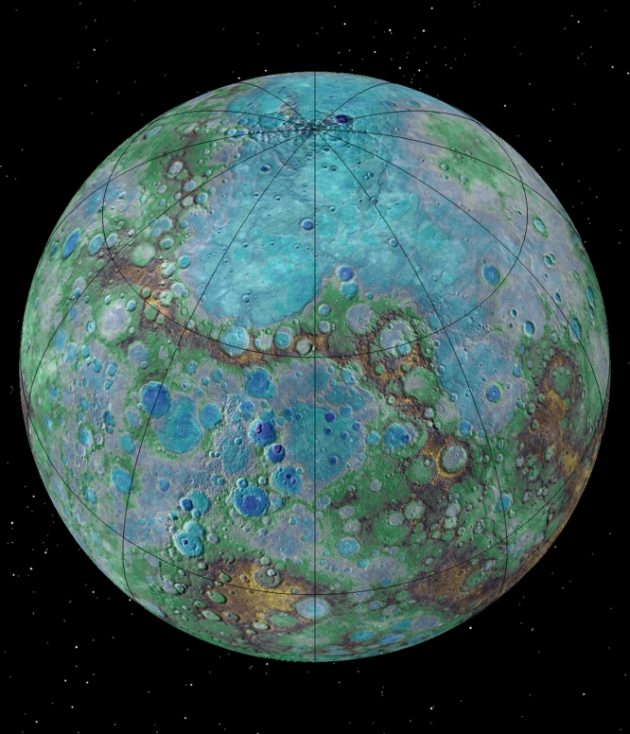 The topography of the northern hemisphere shows the highs and lows of Mercury. The closest approach of the MESSENGER spacecraft to Mercury (the periapsis altitude) was located in the northern hemisphere and so during the low-altitude campaign the small, young fault scarps were found in highest resolution images of that region. This is the first global topographic model of Mercury and is combined with a global image mosaic. The view is centered near Carnegie Rupes, one of the largest lobate fault scarps in the northern hemisphere of Mercury. (Credit: NASA/Johns Hopkins University Applied Physics Laboratory/Carnegie Institution of Washington/USGS/Arizona State University.)

Large fault scarps, cliff-like landforms that look like a giant stair-step in the landscape first found in the flybys of Mariner 10 in the mid-1970s, were confirmed by MESSENGER to indicate the global contraction of Mercury. The large scarps were formed as Mercury’s interior cooled causing the planet to shrink and crustal materials to be pushed together, break and thrust upward along faults making cliffs up to hundreds of kilometers long and more than a kilometer high. In the final 18 months of the MESSENGER mission, the spacecraft’s altitude was lowered allowing the surface of Mercury to be imaged at a much higher resolution. These low-altitude images revealed small fault scarps that are orders of magnitude smaller than the larger scarps. The small scarps, only tens of meters in height and only a few kilometers in length, must be very young to survive the steady meteoroid bombardment, and they are comparable in scale to small, young lunar scarps that are evidence the moon is shrinking.

“The discovery of the small, very young fault scarps on Mercury is like finding a sapling of a tree thought to be long extinct,” Watters said. “The small scarps are the tectonic saplings that with enough contraction can grow in size to become the giant redwoods of Mercury’s fault scarps.” 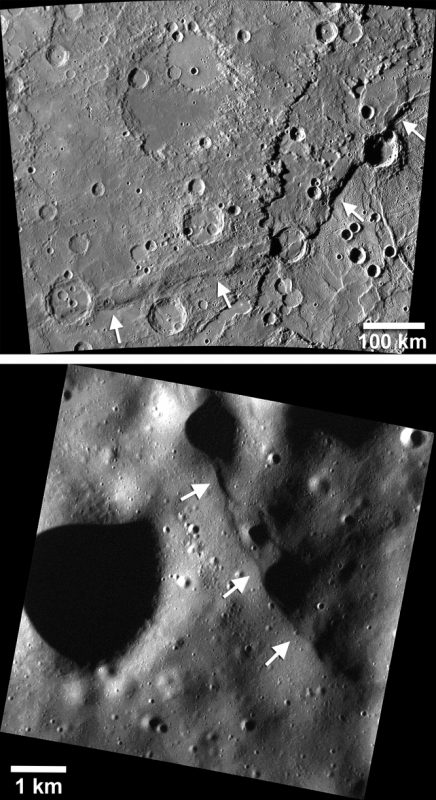 MESSENGER confirmed that the contraction of Mercury resulted in a global array of lobate scarps, tectonic landforms that are the surface expression of thrust faults. Enterprise Rupes is the Goliath of lobate scarps on Mercury (top, white arrows). At about 1000 km long, comparable in length to Earth’s San Andreas fault, and with over 3 km of relief it is the largest lobate scarp on Mercury. Images obtained after MESSENGER’s altitude was lowered during the last phase of its mission have revealed a population of small fault scarps (bottom, white arrows) that can be more than an order of magnitude smaller in size than their larger counterparts. These small scarps are less than 10 km in length and have only tens of meters of relief. They are comparable in size and morphology to small fault scarps imaged on the Moon by the Lunar Reconnaissance Orbiter. (Credit: NASA/Johns Hopkins University Applied Physics Laboratory/Carnegie Institution of Washington/Smithsonian Institution)

Currently active faulting goes hand in hand with the recent discovery that Mercury’s global magnetic field has existed for billions of years—both are consistent with long-lived slow cooling of Mercury’s still-hot outer core. Another implication of ongoing tectonic activity is that Mercury is expected to be experiencing current seismicity. Slip-on faults connected to small lunar scarps are possibly associated with recorded shallow moonquakes that reached magnitudes of near five on the Richter scale. Mercury-quakes associated with slip events on newly formed small faults and reactivated older large faults should be detected by seismometers deployed on Mercury on future missions.