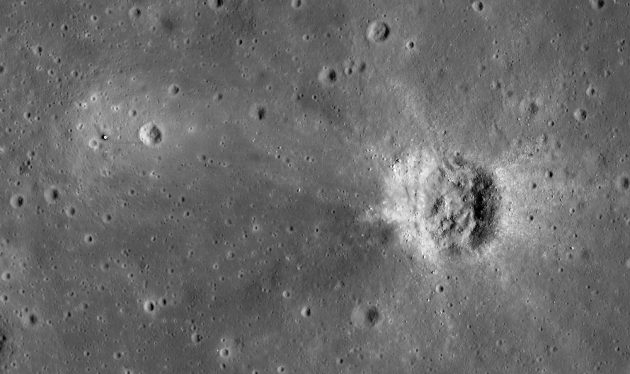 Sea of Tranquility is where Apollo 11 astronauts landed on the Moon in 1969. (Image courtesy NASA/Goddard Space Flight Center/Arizona State University)

Admired from afar by the ancient Romans, the moon was once deified as a goddess, Luna. Today, two-thousand years later, geologists who scrutinize the moon’s face up-close with high-tech space cameras still use divine words—beautiful, dynamic, mysterious, amazing—to describe her.

Such adjectives spring from admiration that is fully on display in “A New Moon Rises,” an exhibition at the Smithsonian’s National Air and Space Museum featuring images from the Lunar Reconnaissance Orbiter. Circling the moon since 2009, the orbiter’s powerful cameras have taken over one million images, providing answers to old questions, and in turn raising new ones.

Q: What is your connection to the images in “A New Moon Rises”?

Watters: I am a co-investigator on NASA’s Lunar Reconnaissance Orbiter Camera. The principal investigator from Arizona State, Mark Robinson, and I wanted the public to see their artistic value, as well as their scientific value so we decided to do this exhibition. We chose dramatic examples from a variety of lunar landscapes and land forms. We also picked images that show evidence of recent geologic activity–activity that was not known before the LRO mission. 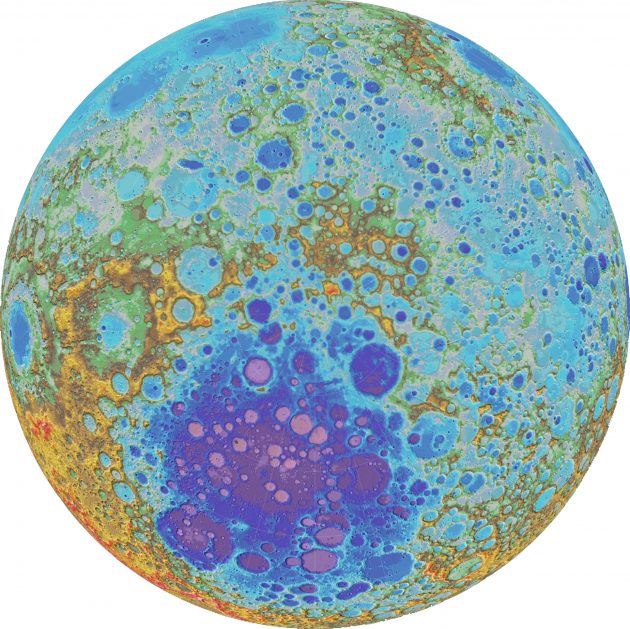 In this view of the Moon, the South Pole is at the center. The colors represent different elevations. The large, roughly circular, low-lying area (deep blue and purple) is the South Pole–Aitken Basin, the largest and deepest impact feature on the Moon. (Image courtesy NASA/Goddard Space Flight Center/Arizona State University)

Q: What led you to this career?

Watters: When I was a boy, the moon rocks, the Apollo mission and seeing the 12 astronauts walking on the moon’s surface fired my imagination. Doing planetary research and studying the moon with the LROC images is the fulfillment of my childhood dreams.

Q: What have you learned from your research?

Watters: We discovered the moon to be a much more dynamic place than previously thought, with new impact craters being formed more frequently than expected, volcanic activity that occurred less than 100 million years ago and young faults that are likely forming on the moon today.

Q: Which is your favorite image?

Watters: It is really hard to pick just one favorite. This one is close: the image of the Apollo 17 landing site at Taurus-Littrow Valley, Dec. 11—14, 1972. A fine vertical line to the left of the arrow (the Apollo landing site) cuts across the valley floor. It is a small scarp, or cliff, formed by a thrust fault. We discovered that this fault and thousands of other small thrust faults all over the moonscape are evidence of a shrinking moon. 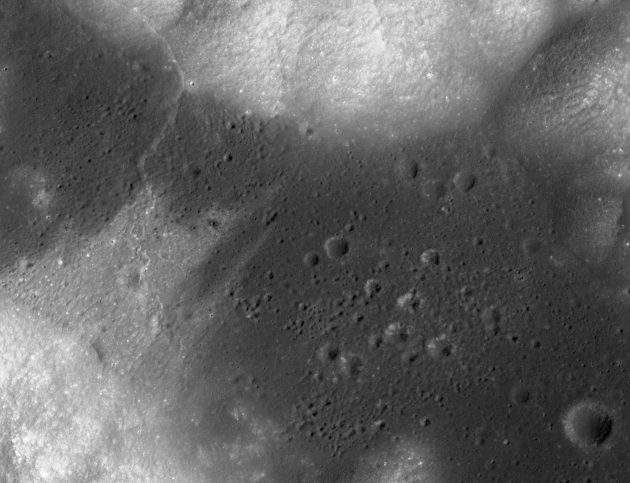 Q: How old is this fault?

Watters: Probably very young (likely much less than 50 million years old), because old ones would be degraded by the constant bombardment of micrometeorites and often larger ones. Small objects bombard the moon all the time. Our atmosphere protects us from this constant bombardment. So in effect, contrary to it being a static world, the moon is always changing.

Q: Is there evidence of changes in the surface?

Watters: Yes. Comparing temporal LROC images we find new craters and impacts. This exhibit picture (below) shows recent change at three separate locations. Each row is early LROC image on the left, a more recent image in the middle, and the difference image or change on the right. In each case the change was from bombardment by an extraterrestrial object. 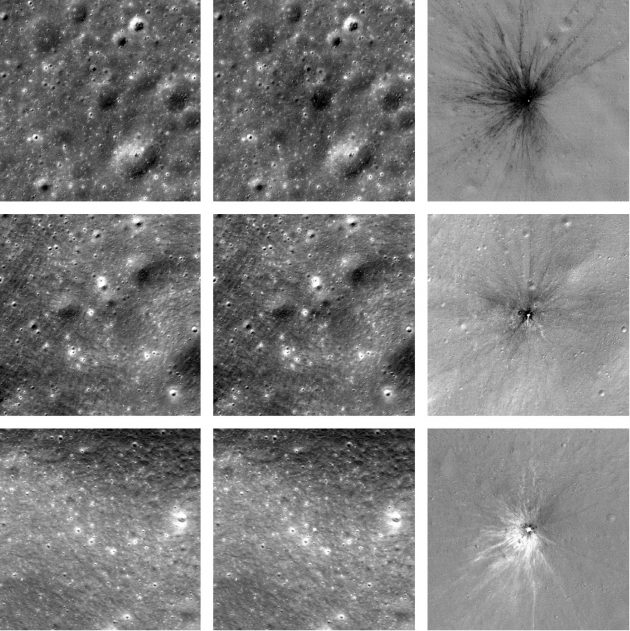 This group of images show recent change at three separate locations. Each row is early LROC image on the left, a more recent image in the middle, and the difference image or change on the right.

Q: What questions will the LROC answer?

Watters: We hope to find evidence that the young faults are still active. Slip on the fault will coincide with a moonquake. The seismic shaking may trigger slumping of soil and rock on the fault scarp that we should be able to detect by comparing early and recent LROC images. 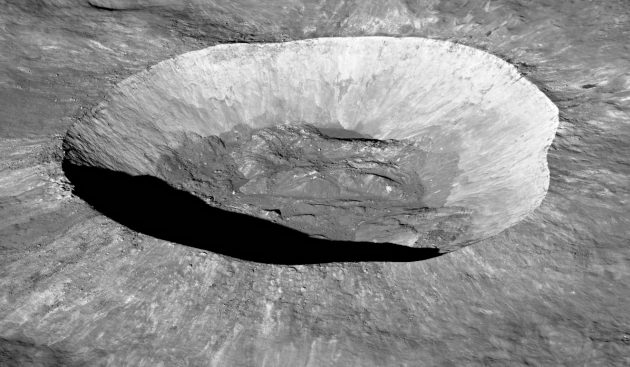 In this striking view of one of the Moon’s craters, the height and sharpness of the rim are evident, as well as the crater floor’s rolling hills and rugged nature. (Credit: NASA/Goddard Space Flight Center/Arizona State University)

Q: The images, especially the color ones, are artful and capture the eye. How were they done?

Watters: The LROC has three cameras. There are two telescopic, high resolution cameras taking black and white images with pixel scales of 0.5 to 2 meters. The third is a wide angle camera that detects seven different colors ranging from the visible to the ultraviolet. By combining 3 of the 7 different color images we get the rust-to-dark-orange color. The color data is used to determine how iron and titanium are distributed in the lunar mare. Most of the iron and titanium are in the mineral ilmenite.

Q: Are you interested in getting to the moon?

Watters: I didn’t think there is much of a chance of me going, but I’d like to go. The technology to get to the moon is well proven. As for a moon base and commercial use, it may be possible in the future. It has to do with the will and resources to proceed. I believe the moon is a logical stepping stone to human exploration of Mars and the solar system. A permanent lunar habitat would be practical, both for obtaining needed resources and as a launching point to Mars and other destinations. 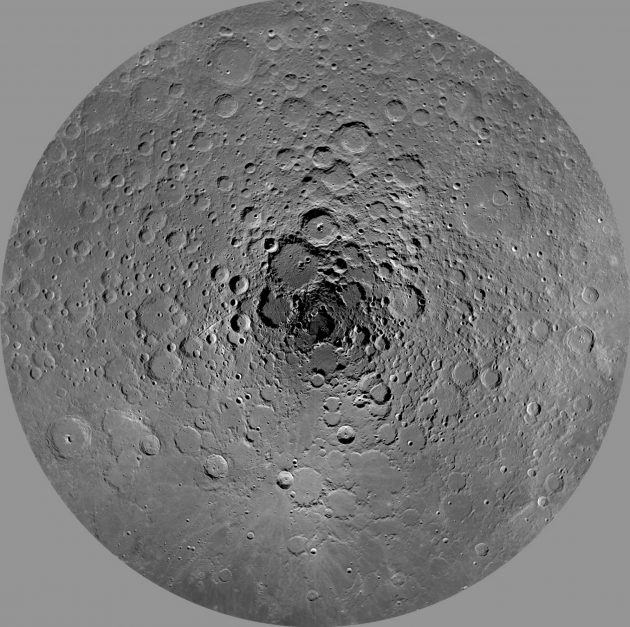 Q: Is there danger to a moon base from constant meteorite bombardment?

Watters: Yes, the constant bombardment of micrometeoroids and larger, crater forming, meteors must be considered.  Also, if the young lunar faults are still active, it is prudent to avoid locating a base too close one of the fault scarps.

Q: I noticed an LRO image looking back at Earth in the exhibit. Does such intense study of the moon cause you to appreciate any specific aspects of the Earth more?

Watters: The Earth-moon system is special. Beginning with the moon’s origin as a mixture of a primitive, Mars-sized planetesimal and early Earth’s crust and mantle the Earth and moon have been connected.  Even today tidal forces from the Earth are helping to shape the moon by influencing the formation of the young lunar faults. 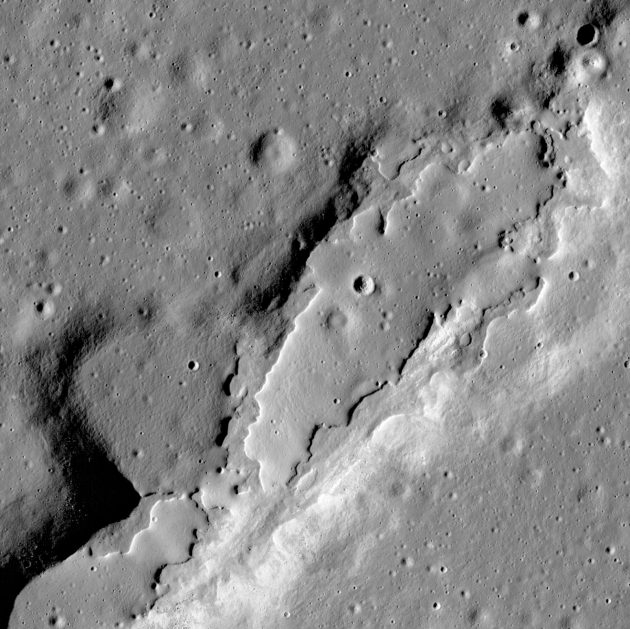 Q: How long will the LRO camera remain functional in space? What space conditions contribute to it “wearing out”?

Watters: It’s impossible to say – the electronics of the cameras show no sign of degradation. Barring some unforeseen problem, the main factor limiting the life of the cameras is the amount of remaining fuel on-board the LRO spacecraft. The projections are that we can maintain orbit for many years to come. Eventually, when LRO has exhausted its fuel, it will crash on the lunar surface. That will be a sad day, but one that is hopefully far in the future.