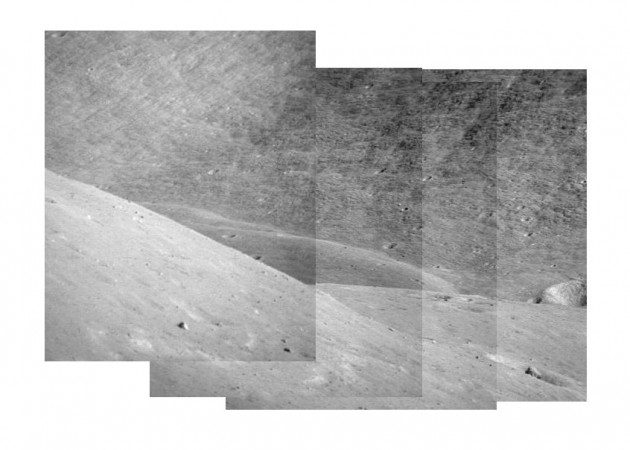 Astronaut Eugene Cernan took this sequence depicting the North Massif and two lobes of the Lee-Lincoln scarp, visible as rounded mounds in the foreground of the pictures. Hanover Crater is cut off by the right-hand edge of the image. (NASA photo)

Everyone knows that the gravitational tugging of the moon makes earth’s oceans swell and recede.

But did you know Earth’s tugging is causing the moon to compress and shrink? A new study by Smithsonian researchers shows the ebb and flow of Earth’s tides is causing stress back on the moon.

Tom Watters, a planetary geologist at the National Air and Space Museum and researcher with NASA’s Lunar Reconnaissance Orbiter (LRO) project, made headlines in 2010 with his discovery that the moon is shrinking incrementally. Watters had previously shown that cliff-like features on the lunar surface, called lobate scarps, were likely the result of quakes, thought to be caused by the cooling of the moon’s still-hot interior. Called moonquakes, their cause is the same as Earthquakes: a shifting of the crust caused by the release of stress built up on a fault line. Scarps are built incrementally over time with each quake. 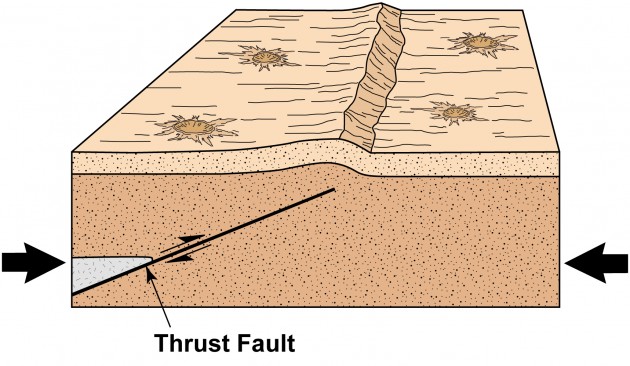 Thrust faults are formed when the lunar crust is pushed together, breaking the near-surface materials. The result is a steep slope on the surface called a scarp. (Graphic by Arizona State University)

After years of amassing volumes of photos of the moon’s surface from the equator to the poles, Watters was able look at more and more of the total surface of the moon in great detail. Along with other Smithsonian LRO team members Maria Banks, Katie Daud and Michelle Selvans, Watters found was that these scarps are incredibly common—so far, the team has counted over 3,200, across all latitudes. But they also noticed a pattern: scarps in the equatorial zones tended to be aligned in a north-south pattern, while in polar latitudes, they mostly ran east-west.

This ran counter to Watters’ expectation. If the moon is contracting solely due to cooling, its compression should be uniform. So scarp orientation should generally be random and not exhibit any discernable pattern. That prompted the team to begin investigating other forces acting on the moon, particularly gravitational effects from the Earth. 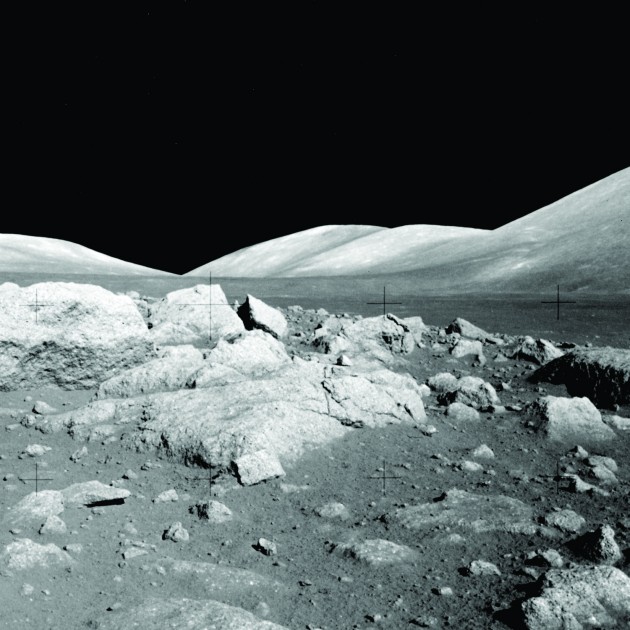 This view of the Lee-Lincoln scarp on the moon show’s the Apollo 17 astronauts’ view of the uplifting caused by the moon’s contraction from cooling and tidal stresses. (NASA photo provided by Tom Watters)

“What people don’t realize is that tides aren’t just the raising and lowering of surface liquids, but also solids,” Watters says. “The tidal cycle puts stress on Earth’s crust. Well, the moon’s going through the same thing, except it has no ocean. So everything that’s happening is solid body, literally deforming the moon.”

With computer models, Watters and his team created a map of lunar stresses that combined all the influences in action:  tidal and cooling contraction. Because tidal forces are not equal in all directions, the uniform stresses of contraction become unequal—causing the over 3,200 fault scarps all across the moon’s face to align.

“The big surprise was the sheer number of faults and that the Earth is actually contributing to those stresses and influencing their formation,” Watters said. “There are so many of them that they’re the dominant tectonic landform on the moon.” 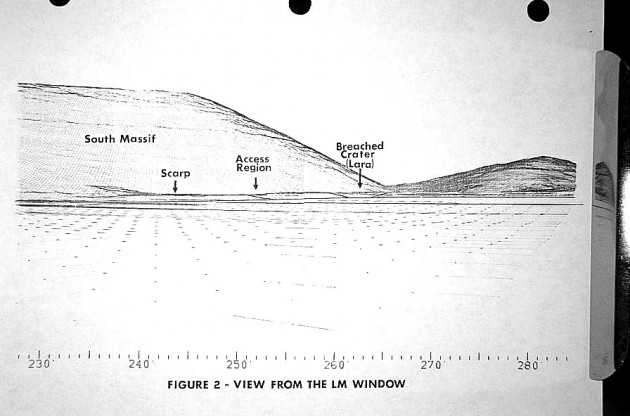 This was the astronauts’ expected view of the South Massif and Lee-Lincoln scarp from the lunar module, assembled from data taken from earlier lunar missions. (NASA image)

Another surprise is their age. Based on their small scale, well-defined appearance, lack of craters across their surfaces and the rate of lunar soil infilling, Watters estimates that most of the scarps are less than 50 million years old (the moon is 4.53 billion years old). They may even still be actively forming today.

But fault slips, if and when they occur, result only in a small amount of upward movement. Watters says the moon has probably only contracted by a total of less than 100 meters overall; compare that with the massive shrinking of the planet Mercury, which he thinks may have lost as much as two kilometers of radius from contraction.

In other words, the moon isn’t going to wither up and blow away.

“There’s no reason to expect that the moon will go through some sort of ramped up phase of contraction,” Watters said.  “It’s slowly cooling, these contraction forces are probably diminishing. I don’t think we’ll ever see Mercury-scale large faults on the moon.” 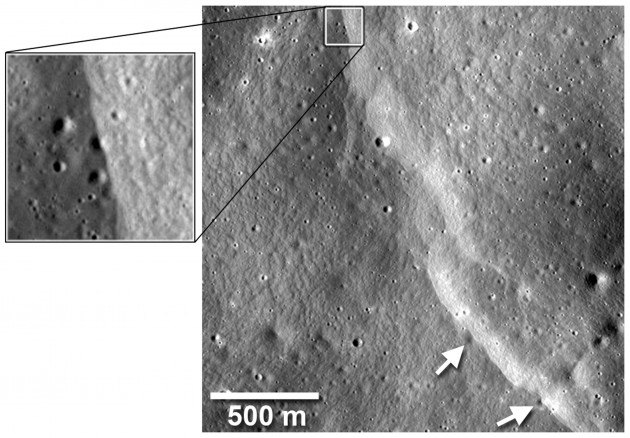 This faultline cuts across and has deformed several small impact craters, indicated by the white arrows. The fault carried surface crust materials up and over the craters, burying parts of their floors and rims. Since small craters only have a limited lifetime before they are destroyed by newer impacts, their deformation by the fault shows the fault to be relatively young. (Photo by NASA/Goddard/Arizona State University/ Smithsonian)

Watters hopes that future work with the LRO can look for evidence that these lunar faults are indeed still active. In the meantime, he said the study, published this month in the journal Geology, highlights the uniquely intimate relationship between the Earth and its moon.

“From the earliest part of the solar system, you have this evolution between the Earth and moon,” Watters said. “But until this study, it wasn’t clear that that relationship extended to very recent, maybe even current, times, and that the Earth is really still affecting the evolution of the moon.”