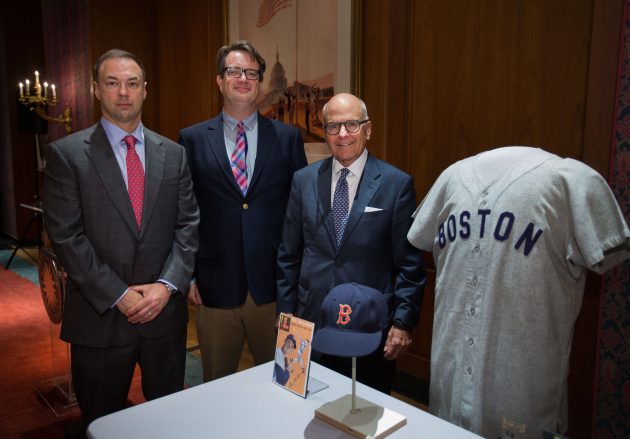 From left, Thomas Tull, Eric Jentsch and John Gray stand before the cap and jersey worn by Boston outfielder Ted Williams that was donated to the Smithsonian’s National Museum of American History by Tull. (Photo by Hugh Talman)

“You can observe a lot just by watching,” Yankees legend Yogi Berra once remarked, and on Wednesday, Aug. 16, in a hushed room on the first floor of the Smithsonian’s National Museum of American History there was a whole lot of watching going on: the awestruck kind.

Spread across and behind a long table surrounded by some 50 plus adoring baseball fans was a Major League collector’s fantasy: a hat and jersey worn (1950s) by Ted Williams of the Boston Red Sox, a bat used by Hank Aaron of the Milwaukee Braves in the 1957 All-Star Game, a glove (ca. 1971) used by Willie Mays of the San Francisco Giants, a baseball signed by the 1927 Yankees including the signatures of both Babe Ruth and Lou Gehrig, and, neither last nor least, Yogi Berra’s bat and glove (ca. 1956).

The event was a special donation ceremony where these special items and more were donated to the American History Museum by Thomas Tull, a private collector and founder, chairman and CEO of Tulco, and founding chairman of Legendary Entertainment. 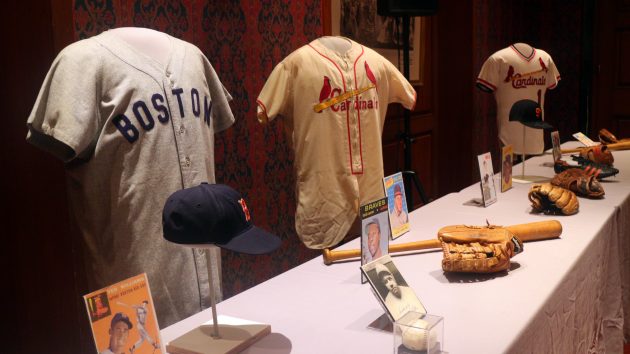 Fourteen significant artifacts from the careers of Major League Baseball players were donated to the Smithsonian’s National Museum of American History on Wednesday, Aug. 16, by private collector Thomas Tull. (Photo by Guilène Assamoi)

“This is an exceptional gift to the nation. Fourteen extraordinary sport objects have been donated to the National Museum to be preserved for and shared with the American people,” John Gray, the Elizabeth MacMillan Director of the National Museum of American History, said. “Thanks to the passion and generosity of Thomas Tull, these objects are now national treasures that belong to all of us.”

“It is an honor and a privilege for me to donate those baseball artifacts to the Smithsonian so that people can enjoy them,” Tull said. “These gifts represent some of baseball’s legendary figures who not only impacted the sport, but also their communities.”

The artifacts join a number of other baseball objects in the American History Museum’s sports collection that include autographed balls, a ticket booth from the original Yankee Stadium, uniforms and equipment including Roberto Clemente’s batting helmet and jersey, and other historically important artifacts representing all aspects of the sport. 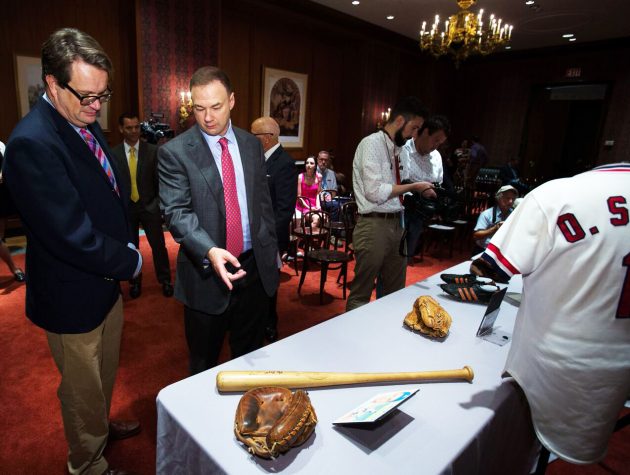 Eric Jentsch, left, and Thomas Tull examine a catcher’s mitt and bat used by Yogi Berra before the the donation ceremony. (Photo by Hugh Talman)

“While the objects we are receiving today were used by legendary baseball players, the American History Museum collects from all areas of baseball: community leagues, girls leagues, Little League, Major Leagues,” Eric Jentsch, curator in the museum’s Division of Culture and the Arts, pointed out after the ceremony. “We’ve got the entire show. All of our baseball artifacts are intended to help researchers and visitors explore the sport’s connections, its history and place in America’s cultural life.” 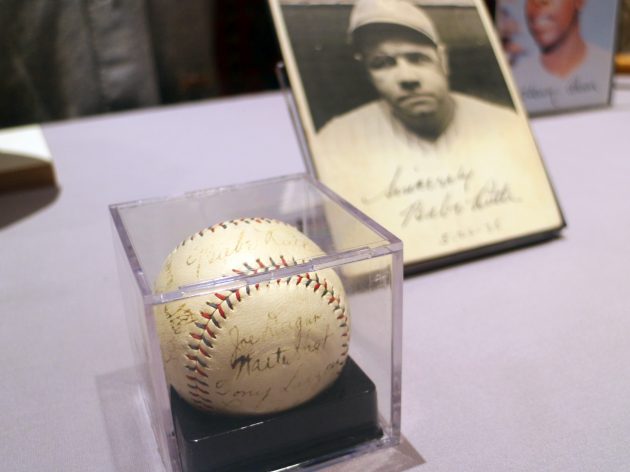 The 1927 New York Yankees are widely considered to be the best team in Major League Baseball history. The team ended that season with a record of 110–44, winning their fifth pennant and finishing 19 games ahead of the Philadelphia Athletics. This is the Yankee team recognized for the lineup nicknamed “Murderers Row,” which included, in addition to Ruth and Gehrig, Earle Combs, Mark Koenig, Bob Meusel and Tony Lazzeri.

Even though the well-worn baseball gloves on the table were once stretched, bent, punched and otherwise broken-in until they comfortably fit the hand of each legendary player—absorbing the dirt, sweat, oils, grass smears, tobacco juice and other constants of the game—from here forward they will be treated as museum artifacts.

“Don’t touch!” Director Gray jokingly exclaimed at one point during the event as two members of the museum staff stood nearby wearing special gloves for handling the objects.

Set up amid replicas of baseball cards featuring the names and photos of their former owners, the objects consisted of a variety of materials: wooden bats, cotton jerseys and caps, a canvas baseball and leather cleats and gloves—all materials the museum’s conservators know well. 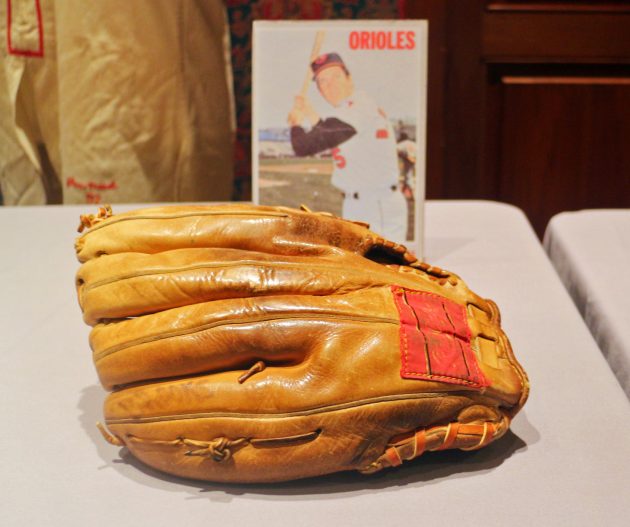 “We have one of the best conservation staffs a museum can have,” Jentsch pointed out. “Even for this donation ceremony they looked carefully over everything, mounted the jerseys for us, adding padding so they kept their shape, and they recommend how we store the objects and how to display them. We have very strict rules designed to preserve these objects—temperature- and humidity-controlled cabinets and we keep the light off.”

Conserved under controlled conditions and brought out of storage for exhibits, research and showing to the public at special events, “ultimately we want to preserve these objects for the American people for posterity,” Jentsch added. “We’re looking at 100 years from now, 200 years from now….and we want these things to be in good shape.”

As Berra once observed, “The future ain’t what it used to be,” the American History Museum intends for his bat and glove to be part of that future, whatever it is, for a very long time.