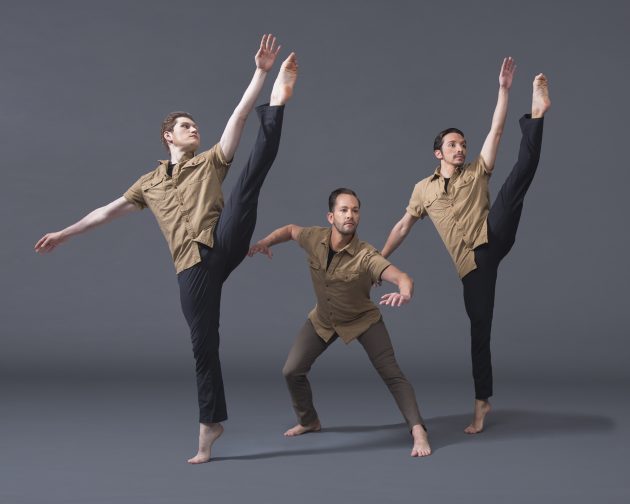 Members of Dana Tai Soon Burgess Dance Company perform “After 1001 Nights,” which will have its world premiere at the National Portrait Gallery July 8. (Photo by Jeffrey Watts)

In a brightly lit basement dance studio at Georgetown Day High School in Washington, D.C., choreographer Dana Tai Soon Burgess watches two young male dancers rehearse a new section of a six-part performance “After 1001 Nights,” that will pay homage to a current exhibition at the Smithsonian’s National Portrait Gallery, “The Face of Battle: Americans at War, 9/11 to Now.”

As music from composer John Zorn’s “Leonard: Book of Angels Volume 30” fills the studio with the exotic echoes of violins and drums, the dancers perform a mirror-like choreography with alternating twists and kicks, sways and turns. Their dance depicts a soldier looking back at his younger self, trying to come to terms with what he saw and did in war.

Burgess is the Smithsonian’s first choreographer-in-residence. Ten dancers from his Washington, D.C. company will perform the world premiere of this piece at the Portrait Gallery on Saturday, July 8 at 2 and 4 p.m. Open rehearsals will be held at the Portrait Gallery on Saturday, June 10 and Saturday, June 17 from 11:30 a.m. to 2 p.m., to provide visitors a window into the choreographer’s creative process.

Following the rehearsal, Insider asked Burgess a few questions about this project and his creative process. 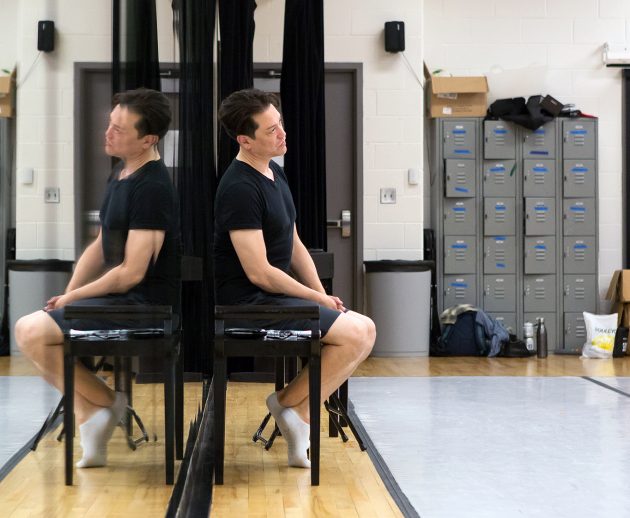 Dana Tai Soon Burgess observes a rehearsal by members of his dance company in the basement of the Georgetown Day High School in Washington, D.C. (Emily Karcher Photography)

Insider:  Please tell me about your creative process for choreographing.

Burgess:  So there are all these layers in making a dance. There’s an [initial] idea or concept, and then you research that idea. I’ve been speaking to different veterans from the Afghanistan and Iraq wars, talking to them about their experiences just to better understand the psychology of remembering, and for those people who have Post Traumatic Stress Disorder, what triggers it, how does it manifest, and is it memory-oriented?

Then there’s finding music that works, researching and talking to the exhibition’s curators to better understand how to create a work that will have connectivity to the exhibit. Once that is percolating, I start making phrases with the dancers, and those phrases become this generic language for the piece. Once we have enough information it gets edited and reformulated, just like a book. It’s just like other forms of storytelling.

In this dance, there is an older individual who is a veteran looking back at this younger self [the second dancer]. A third dancer dressed in black, represents the emotional baggage that the older soldier carries. His trauma is manifesting and what to do with it, how to get rid of it is the question.

Insider: That translates into so many things in life.

Burgess:  How do you get rid of trauma, right?  We all have triggers and we all have trauma at different levels somehow forming the decisions we make today. The question is how to get rid of the negative effects of trauma so that we can move forward and self-actualize without fear. That is something that is profound, but that is the human journey.

And that’s why, even though this dance is abstract, I try to make my dances about the human experience, even if you can’t say, “Oh, this character’s name is so and so.”

On a very visceral, physical level, I think people understand humanity’s stories because we only have a few of them, really. Stories of love, stories of loss, stories of celebration, stories of death… We have so few stories, really, and we’re constantly telling them in different ways, over and over again.

Insider: The dance was so elegant, so graceful and at the same time, one can feel sharper punches in the movements. How do you take something like war—the gruesome, hard story of these veterans—and translate it into something beautiful and have that relate to your audience?

Burgess:  I’m really interested in how to relate to an audience through different archetypes; for instance, the archetype of the young soldier within this piece and how that manifests through age, the memories of that [younger self]. There is something poetic and beautiful that in a way, you have to have these polar opposites of something that is sublime in order to understand something that is deeply dark and disturbing. They can’t exist without each other, right? 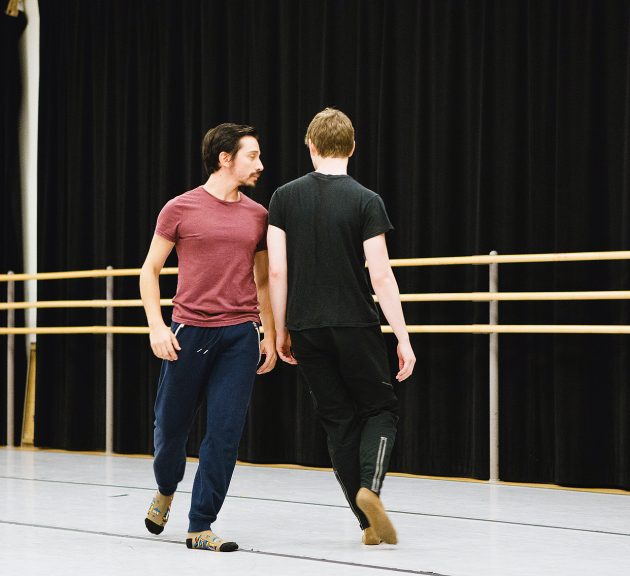 Insider: As the first Smithsonian choreographer in residence, what do you see as your role?

The other thing I really appreciate is that dance has a place within a museum. I think that is vital. It’s an ephemeral art form. Dance is here for the moment. It’s gone the next moment. It is never going to look exactly the same. I do think that as an art form, it belongs within a museum structure, it should be viewed and interpreted there.

I just noticed the other day that the Museum of Modern Art is going to have a resident choreographer starting next year. So I think it’s kind of taking off! You know, people have done dances in museums before, but an ongoing relationship with a curatorial staff and historians and access to collections over a length of time…that is different. That is what is so neat, it’s like “Night at the Museum” because when I’m in there when it’s closed, I just think, “Oh, I’m the luckiest person in the whole world!” 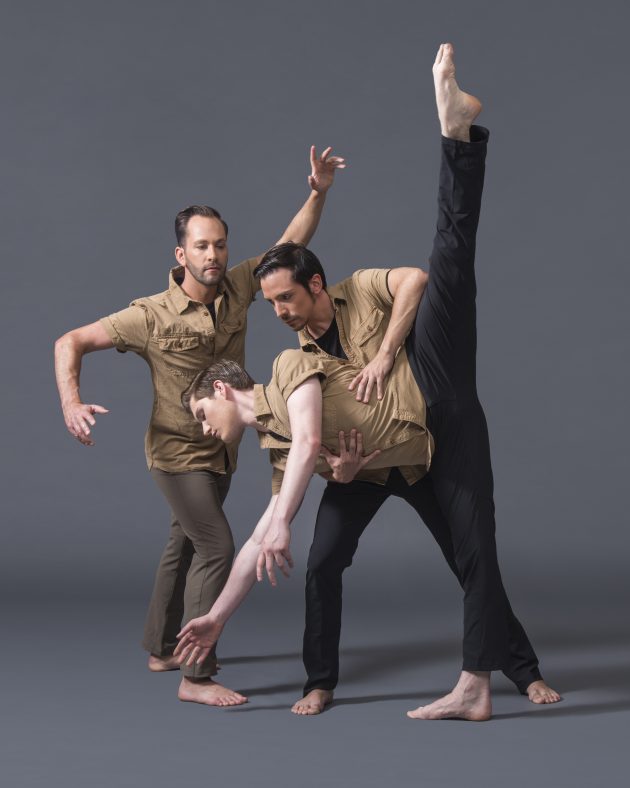 Members of Dana Tai Soon Burgess Dance Company perform “After 1001 Nights,” which will have its world premiere at the National Portrait Gallery July 8. (Photo by Jeffrey Watts)

Insider: How does your role tie into the larger mission of the Smithsonian?

Burgess:  In terms of the mission of the Smithsonian, dance–especially modern dance–is the direct outcome of the social context that it’s created in. So what happens with a dance is that you get this moment in time in which the choreography is and that becomes another expression of American history. The dance becomes this interesting time capsule.

There is also something uniquely American about modern dance in that it constantly morphs, changes and absorbs different ways of moving. It’s always in flux and change.

Having dance accessible for everyone is important.  When you think about the written word or the spoken word, what comes prior to that as a major form of communication for all of humanity–no matter where you are from or what language you speak–is movement. We all understand somebody’s depressed or we all understand that somebody’s elated. We can see that in posture, we can see it in their gestures. It becomes wonderful to have a dance that is universal to whoever’s in the room.

Insider:  Whom do you want to reach? Who is your target audience?

Burgess: I love the fact that by being at the Smithsonian these performances are free to the public. Also being in the heart of Washington, D.C., such a vibrant area, which is Metro-accessible, bus-accessible, even walking accessible, I really feel like people from all over the Washington region come to the shows, and follow the shows. Also, there’s a layer of national and international individuals moving through the city as tourists. So for them to see the work is great as well. And for this particular work, you know, I would love for veterans to come and be able to experience it.

Insider:  Why should people care about the work you are doing?

Burgess: Not to sound stereotypical but I am a true believer that art changes us. The making of it changes us, the seeing, the viewing, the experiencing of it gets us to a more empathetic place of understanding different perspectives. And in that way, we are better people, and better people make a better world. I think that is why it’s important–because it is transformative. It’s at the core of what we need to be doing. Somehow moving to a place of empathy and understanding with each other, that’s what is going to save us.