When the famous Lansdowne portrait of George Washington is taken off public display next month at the Smithsonian’s National Portrait Gallery for an 18-month conservation, it will be receiving a series of in-depth diagnostics from the latest imaging technology and treatment to correct some existing problems. 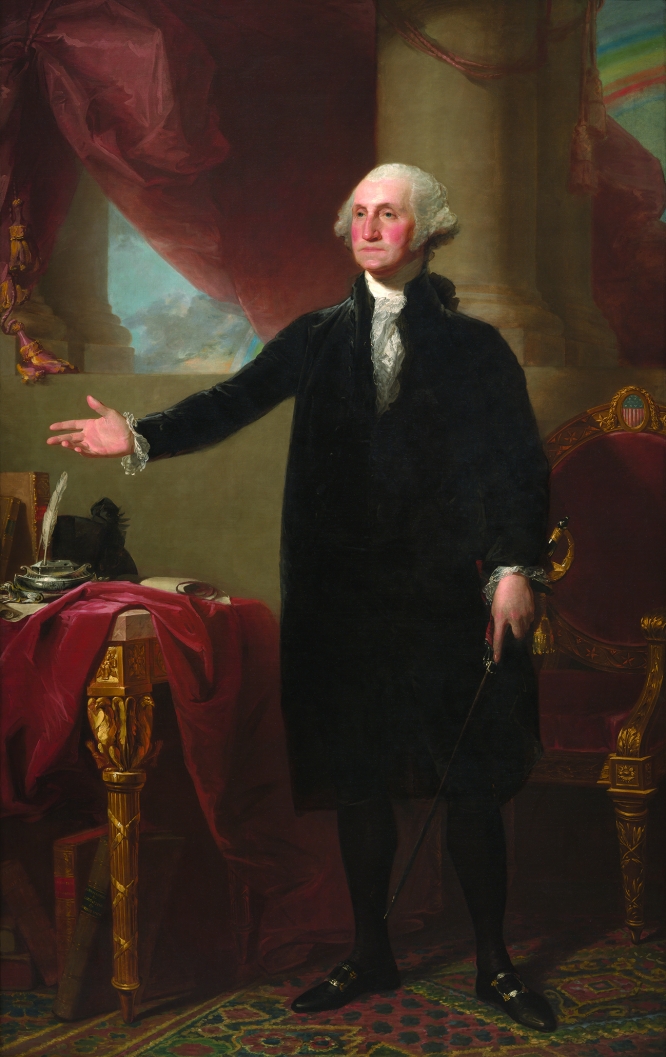 George Washington (Lansdowne Portrait), Gilbert Stuart, oil on canvas, 1796, National Portrait Gallery. Smithsonian Institution; acquired as a gift to the nation through the generosity of the Donald W. Reynolds Foundation.

The 1796 painting, acquired for the National Portrait Gallery with a gift from the Donald W. Reynolds Foundation, is the work of the prolific portraitist Gilbert Stuart. Though only briefly examined after its purchase in 2001, during its upcoming conservation it will receive a thorough cleaning and analysis by Cindy Lou Molnar, Head of Conservation and paintings conservator.

Molnar will not only carefully clean the portrait, but also make a high-tech portrait of the portrait itself with digital X-rays, infrared reflectography (IR) and ultraviolet light (UV). All data will be recorded and preserved.

Together with digital imaging specialist Elizabeth Keats Webb at the Smithsonian’s Museum Conservation Institute, Molnar will be carefully studying the different layers of the painting. The digital profile they’ll create through multispectral analysis of the painting will not only form a comprehensive catalog of the painting’s structure, but will help Molnar create a conservation strategy.

The analysis we complete now will enhance our knowledge about Stuart’s techniques and materials,” Molnar says. “Because I will be removing the yellowed varnish from the surface of the portrait I want to know all I can about the painting physically. The technical information gathered will help in making informed treatment decisions.”

(In this video National Portrait Gallery Associate Curator Dorothy Moss recounts the interesting story behind one of our nation’s most iconic paintings.)

Commissioned as a gift for the Marquis of Lansdowne, who played a major role in the negotiations that led to the end of the Revolutionary War, the portrait is significant not only because of its subject, but because it was the gift of American senator William Bingham to the British statesman. Ellen Miles, curator emerita of sculpture and painting at the Portrait Gallery and who has worked closely with Stuart’s paintings throughout her career, says the portrait was specifically commissioned to celebrate the Jay Treaty of 1794, which resolved outstanding disagreements that had lingered since the Revolution.

The Lansdowne portrait’s return to public view in the fall of 2017 will coincide with the 50th anniversary of the opening of the Portrait Gallery. It will be the centerpiece of a refurbished Presidents’ Gallery.

Scanning the painting, which at 8 feet tall and 5 feet wide is unwieldy to transport and handle, presents its own unique challenges. Smaller works can be laid flat on a tabletop, but the size of the Washington portrait may require some inventive approaches for various scanning techniques. 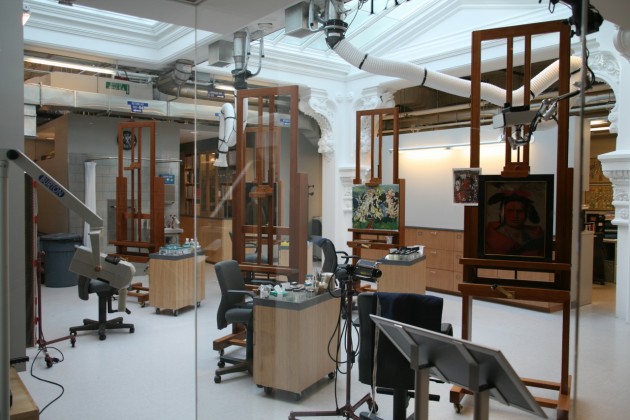 The 10,200-square-foot Lunder Conservation Center is shared by the Smithsonian American Art Museum and the National Portrait Gallery and is located in the museums’ historic building. Its five laboratories and studios are equipped to treat paintings, prints, drawings, photographs, sculptures, folk art objects, decorative arts, and frames. Some of the work on the Lansdowne portrait will be conducted here. (Flickr photo by Cliff)

The variety of imaging techniques used on the Lansdowne will reveal different aspects of the painting’s structure. X-rays, which show information about the entire structure of the painting, will reveal much about Stuart’s materials, damages to the portrait and artist’s changes, called pentimenti. Pentimenti, which are typically undetectable to the naked eye, are actually quite noticeable on the Lansdowne in visible light when pointed out by an expert like Molnar, who references shadows along Washington’s shoulder, legs and hat.

UV examination will reveal surface information about the painting, such as the type of varnish used and the presence of past restorations, and can help identify pigments. According to Molnar, the current natural resin varnish has yellowed significantly and appears to have been a problem in a previous restoration. UV examination in 2001 revealed partial removal of the old varnish coating in Washington’s coat, leaving the black coat currently looking visually streaky and cloudy. 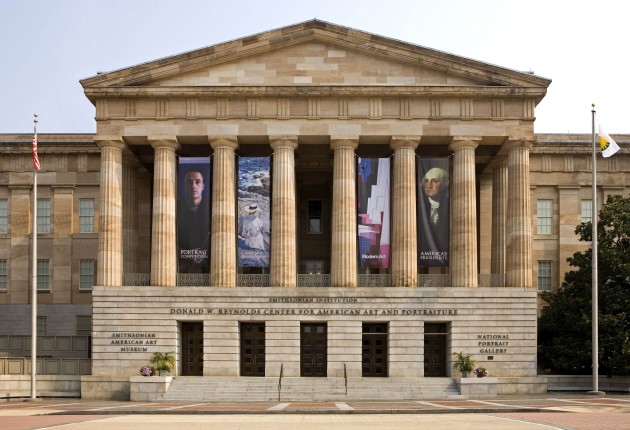 The Donald W. Reynolds Center for American Art and Portraiture, home to the Smithsonian American Art Museum and the National Portrait Gallery in Washington, D.C.

Infrared scans might reveal whether any underdrawing in graphite is present under the painted surface that would have helped Stuart complete the complex iconographic details of the portrait. Areas of particular detail include the chair, the sole visible table leg and the books. Philadelphia architect Samuel Blodgett assisted Stuart in the design of these details, according to a letter written years later, in 1858.

New views of the Lansdowne may also help address longstanding questions about some of the replicas of the portrait, Miles says, notably the one on display in the East Room of the White House.

Brandon Fortune, chief curator of art at the Portrait Gallery, says the success of Molnar’s work hinges as much on her experience as an artist as well as her knowledge of chemistry and art history.

Molnar herself says her primary goal is to ensure the painting, when it’s been cleaned and restored, looks the way the artist originally intended it to be seen. “Gilbert Stuart was adamant about using materials that were long-lasting. He was concerned about his paintings being viewed in the future the way he finished them,” she says.