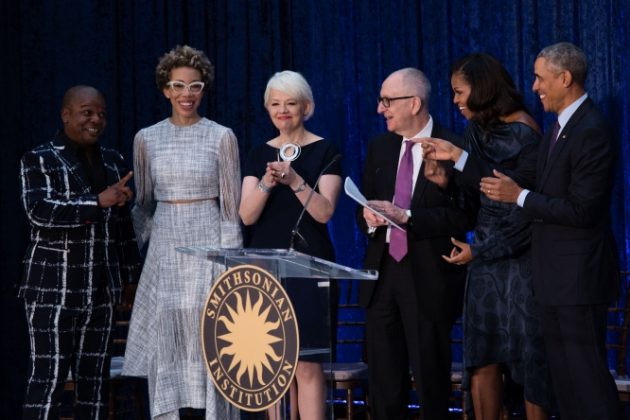 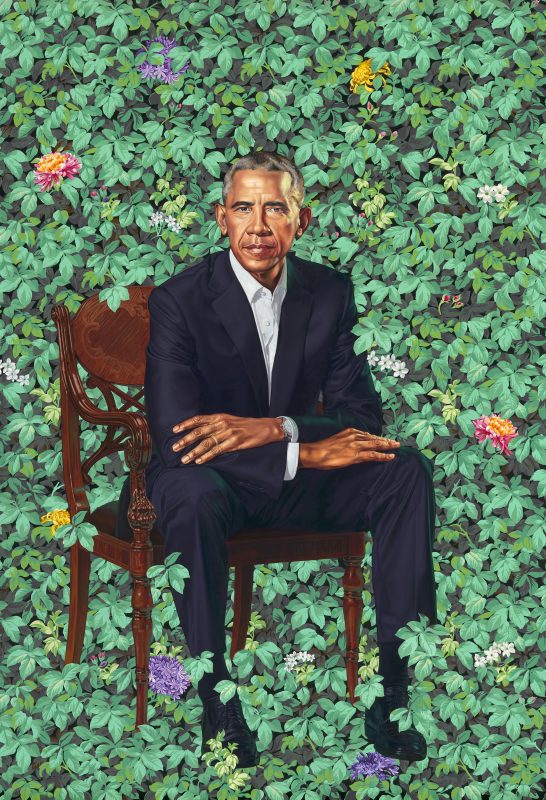 In his portrait by artist Kehinde Wiley, Barack Obama sits before a wall of vines that threaten to engulf him as green tendrils wind up his legs and poke around the edges of a polished wood chair. Wearing a black suit, the former president leans on crossed arms, engaging the viewer with an introspective and almost questioning gaze. His expression is solemn and slightly weary, but not bowed.

In her portrait featuring a simple pastel-blue background, Michelle Obama rests her head on her right hand above a flowing white dress highlighted with bold geometric designs. 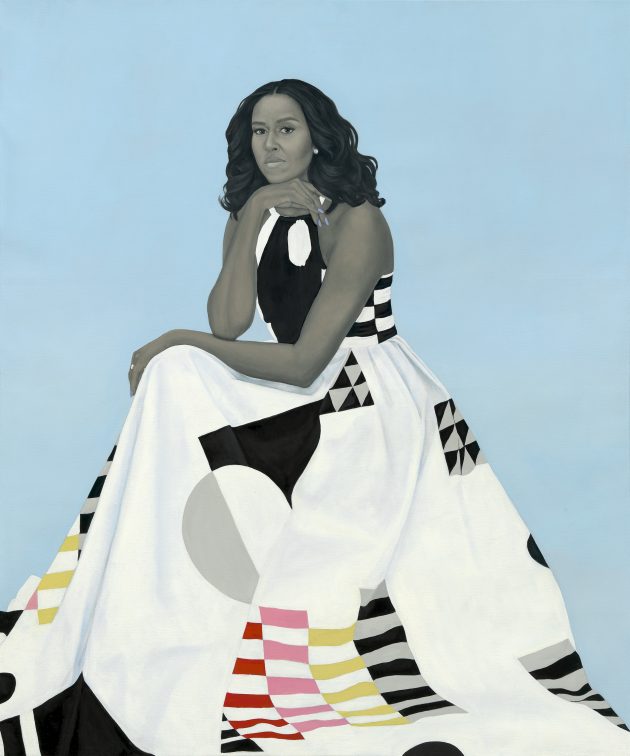 After reviewing dozens of artist portfolios while they were still living in the White House, Michelle Obama selected Baltimore artist Amy Sherald to paint her portrait while her husband selected Wiley. The Obamas and the artists spoke Tuesday about their shared experience before hundreds of people gathered in the National Portrait Gallery’s indoor courtyard.

“How about that? That’s pretty sharp,” Barack Obama said about his own portrait before turning to Sherald. “Amy, I want to thank you for so spectacularly capturing the grace and beauty and the intelligence and charm and hotness of the woman I love.” 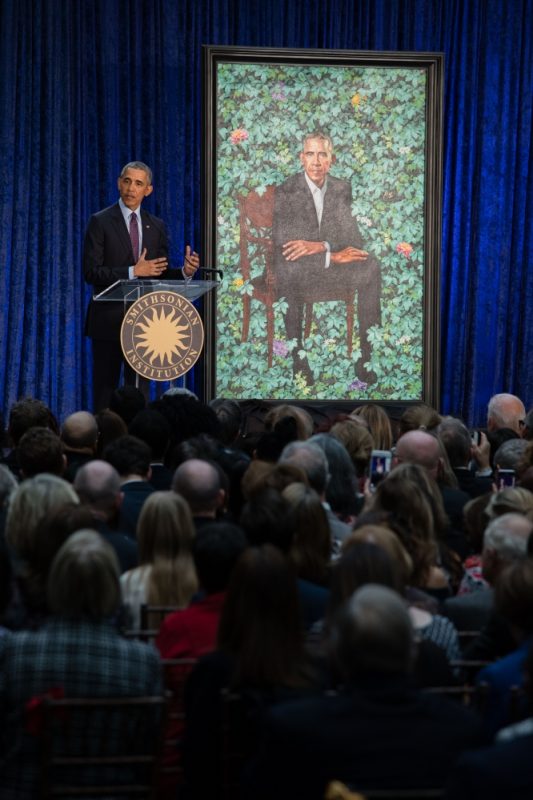 Barack Obama said both he and Wiley had loving American mothers and absent African fathers and their lives had been shaped by searching for their fathers.

Wiley grew up poor in South Central Los Angeles in the 1980s, and he credits his single mother with steering him and his siblings away from the gang life toward an enduring love for the arts.

Wiley’s well-known artwork features portraits of African-American men who he has met on the streets in New York. He paints them realistically but casts them in classical poses in elaborate scenes reminiscent of 18th-century portraits, replacing white emperors and stuffy generals with contemporary black men in hip-hop street attire, thus confronting the lopsided history of portraiture that was the exclusive domain of white power and privilege for centuries. 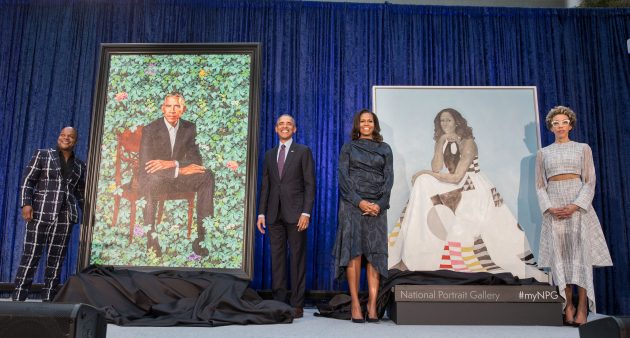 Barack Obama said that message resonated with him when he saw Wiley’s work.

“He would take extraordinary care and precision and vision in recognizing the beauty and the grace and the dignity of people who are so often invisible in our lives and put them on a grand stage on a grand scale,” Obama said.

Obama joked that he asked Wiley to paint him with less gray hair and smaller ears, but “Kehinde’s artistic integrity would not allow him to do what I asked.”

Unlike some of Wiley’s other portraits, Obama said he didn’t want an ornate setting with “partridges and scepters and thrones” or “mounting me on horses.”

“I had to explain that I’ve got enough political problems without you making me look like Napoleon. We have to bring it down just a touch, and that’s what he did,” Obama said. “I am in awe of Kehinde’s gifts and what he and Amy (Sherald) have given to this country and the world.”

Wiley said he didn’t see people who looked like him on the walls of Los Angeles art museums when he was growing up, and his work has sought to correct that so “people who happen to look like me do feel accepted or have the ability to express their state of grace on the grand narrative scale of museum space.”

The flowers in Barack Obama’s portrait are symbolic of his life journey, including African blue lilies representing his late Kenyan father, jasmine for his birthplace in Hawaii, and chrysanthemums as the official flower of Chicago.

“There’s a fight going on between him and the foreground and the plants that are trying to announce themselves beneath his feet,” Wiley said. “Who gets to be star of the show, the story or the man who inhabits the story?” 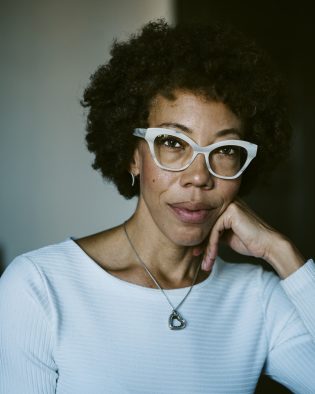 Both Barack and Michelle Obama said neither they nor anyone in their families has ever had a portrait painted of them before.

Private donors funded the purchase of the portraits, including director Steven Spielberg and his wife Kate Capshaw who attended the ceremony. Other celebrities in attendance during the unveiling included former Vice President Joe Biden, actor couple Tom Hanks and Rita Wilson, and country singer couple Faith Hill and Tim McGraw.

While they were in office, the Obamas hosted the unveiling in 2012 of the official portraits of former President George W. Bush and former first lady Laura Bush.

Michelle Obama said she hoped young girls of color would be inspired by seeing a portrait of someone who looks like them hanging in the National Portrait Gallery.

“What an incredible journey we are on together in this country. We have come so far, and yes, as we see today, we still have a lot more work to do, but we have every reason to be hopeful and proud,” she said. “And I am truly grateful to have had the opportunity to stand alongside my husband and play a very small part in that history and that future, but I am even more proud of the extraordinary woman and artist who made this portrait possible.” 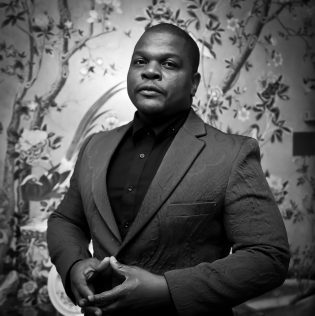 Sherald’s own personal journey has been incredible, including a heart transplant in 2012 when she was 39 years old that saved her life after congestive heart failure. She previously had quit painting for three years to care for ill family members in her native Georgia, but she shot to national prominence in 2016 after beating more than 2,500 other artists to become the first woman to win the National Portrait Gallery’s Outwin Boochever Portrait Competition, which included a commission and $25,000 award.

As in Michelle Obama’s portrait, Sherald is known for painting African Americans with grey skin tones as a means of deconstructing race and the prominence that many Americans place on skin color. Turning to face Michelle Obama on the stage, Sherald said she was honored and humbled to paint her portrait, which is a “defining milestone in my life’s work.”

“The act of Michelle Obama being her authentic self became a profound statement that engaged all of us because what you represent to this country is an ideal, a human being with integrity, intellect, confidence, and compassion,” Sherald said. “The paintings I create aspire to express these attributes, a message of humanity.”