A vein on the left side of Esperanza’s neck pulses; the fabric of her dress accordions faintly out and in with each breath; her finger twitches and grains of mascara ride eyelids that halfway conceal two smiling eyes. Welcome to the intimacy of slow and the close-up video portraiture of Bo Gehring on view in the Smithsonian’s National Portrait Gallery exhibition “Eye Pop: The Celebrity Gaze.”

To have her portrait taken by Gehring, Esperanza Spalding, jazz singer and musician, lay supine in her clothing on a milling table in Gehring’s Greenwich Village studio. With the opening notes of Wayne Shorter’s sensual recording “Tarde,” a video camera suspended on a track above the table begins a smooth and slow journey from Spalding’s feet to her head.

In her portrait the first thing we see of Spalding is the wooden heels of her shoes and the skin inside the arches of her feet. The camera is so close that it captures only the center of her body, omitting extreme left and right, such as her arms and shoulders.

Gehring, a 74 year-old engineer turned artist, allows the music to determine the camera’s pace. “Tarde,” the song Spalding choose from her jazz mentor Wayne Shorter’s songbook, is 5 minutes and 45 seconds. Using a computer, Gehring directed his camera to traverse Spalding’s body in exactly that period of time.

“It’s a relatively strict formula,” Gehring says, “where I get the person’s height and I know the length in seconds of the music that they have….The idea was to capture this extraordinary amount of detail focused on the music…”

The effect can be emotionally overwhelming. As one viewer of Spalding’s portrait commented online: “I saw this today at the Portrait Gallery. Wept the whole time and then almost ugly cried when the film reached ES’s face. I haven’t been so moved by art in some time….”

Gehring and Spalding were brought together by the National Portrait Gallery, which commissioned the portrait. “Since music is integral to Gehring’s work, we wanted a musician and Esperanza is young,” explains Portrait Gallery associate curator Dorothy Moss. “We thought it would be something she could relate to and would enjoy. She leapt at the opportunity.” 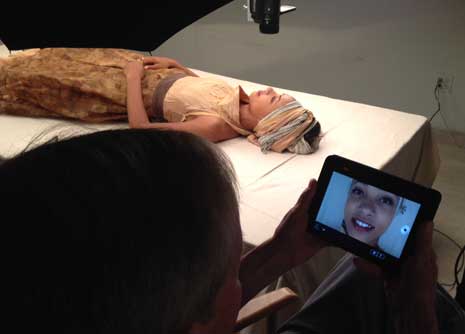 During the process “he told her to just relax and listen to the music,” says Moss, who was in Gehring’s studio when Spalding’s portrait was recorded in 2014. “What he is trying to capture is an emotional response to music over time, so he just hopes that the subject will relax and really listen to the music.”

“They have to choose the music,” Gehring adds. “I won’t help them in any way. I treat the music as an extension of clothing, as plumage if you like, that’s how I think of it…  Part of this portrait process is revealing this very personal thing about the subject. [The music] It’s so telling about the person.”

Because Gehrig’s videos are so intimate, “it takes a certain courage, trust and collaboration on the part of the subject,” Moss says. “You really see every detail. You are seeing more than the eye can ever see in focus and motion. Gehring’s portraits slow the viewer down. You want to wait and get to the subject’s face, so you are forced to stop and look and really pay attention to detail and listen because you have time.”

The Portrait Gallery first became aware of Gehring’s work when he submitted a video portrait of a woodworker to its 2013 Outwin Boochever Portrait Competition. “We were stunned by the level of detail, it is part of what made the portrait so innovative,” Moss says. Gehring won top prize which includes a commission for the museum.

Gehring is now branching out, making video portraits of objects such as cars and musical instruments, expanding his portraiture to include nonliving things.

“More and more video artists are experimenting with portraiture and ways of portraying identity, so we do have a collection of media art that is steadily growing,” Moss says. “Video portraits are something the museum is focusing on.”

Interestingly, it seems most of Gehring’s video portraits are viewed primarily on computer screens. His website contains a number of portraits that can be viewed online. The large-format screen in the Portrait Gallery exhibition displaying Spalding’s portrait is a rarity.

“When the camera moves at a regular pace you forget about it…,” Gehring says of his work. “So the idea was to capture this extraordinary amount of detail focused on the music and make the camera disappear.”

At the end of her portrait session, Moss says, Spalding stood up and thanked Gehring for giving her a chance to slow down.