A word to the wise: don’t ask a paleontologist to pick a favorite fossil. It’s like asking your mother which child she loves most, or asking a baseball slugger to choose his favorite bat.

With over 40 million fossils residing in the Smithsonian’s National Museum of Natural History alone, there’s no reason to favor just one. For scientists who love and study them, fossils are more than mere curiosities; they help piece together mysteries from the deep past, and allow researchers to better understand life on Earth.

So if you’re out and about on National Fossil Day, Wednesday, Oct. 14—or Saturday, Oct. 10, at many museums including the Smithsonian’ s Natural History Museum in Washington, D.C.—try asking a paleontologist what is most important about the fossils they study.

Below, is what three Smithsonian researchers have to say about the importance of fossils. 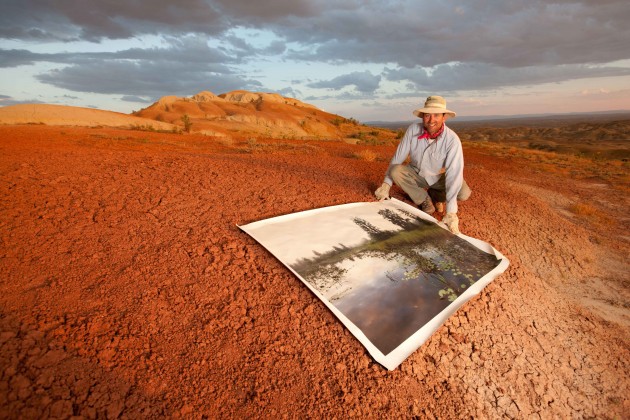 At Wyoming’s Big Red Spit, Scott Wing of the Smithsonian shows a print of the Okefenokee Swamp, depicting what the area may have looked like 50 million years ago. (Photo used with permission of Ira Block)

After a long day of field work in Wyoming in 2005, Scott Wing decided to take a few more moments to dig into a hillside he hadn’t explored before. What he found shocked him into hysterical laughter.

Wing studies the response of prehistoric plants to rapid climate change—how communities of plants change depending on the climate. For more than a decade, he’d been hunting for a particular layer from the Paleocene-Eocene Thermal Maximum, or PETM, an interval of global warming nearly 56 million years ago.

Wing had collected a broad range of fossilized plants from before and after this period, but he wanted to see what kinds of plants were dominant during the hot years. He’d never had much luck.

“As soon as I saw the fossils, I knew. They didn’t look like anything before or after,” Wing says. “It was so striking it seemed absolutely hilarious. There it was all of a sudden, after all that time looking.” 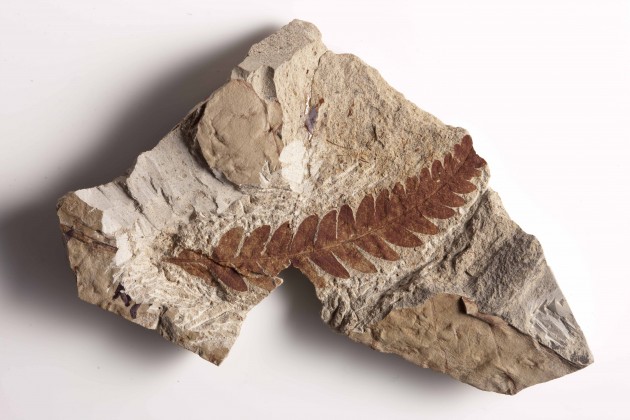 A Rhus-like leaf fossil from the PETM related to the sumac. The 55.8 million year old leaf fossil is from the collection of Scott Wing at The Smithsonian Institution in Washington, D.C. (Photo used with permission of Ira Block)

Scientists knew there had been a massive release of carbon into the atmosphere just before the PETM, and that the resulting warming trend took about 100,000 years to subside. Wing’s pre- and post-PETM plant communities were drastically different from groupings alive during the warming event.

Prior to the warming, relatives of modern alder, birch, dawn redwood and sycamore dominated the landscape. But in the chance hillside find, the fossil leaves were primarily relatives of laurel, mimosa and palmetto, species more adapted to hot, dry climates. Wing said it drove home the point that what had previously been a temperate, moist climate was suddenly much hotter and drier.

Wing is eager to understand the distant past for the lessons it holds. “Most people realize that today we are warming the climate by releasing greenhouse gases, but they don’t realize that the change is going to last beyond any human time scale,” he says. “You’re stuck with it for a very long time. We want to mine this information from the fossil record to understand how global climate systems are connected, and what happens when you have a big carbon release and warming like this.” 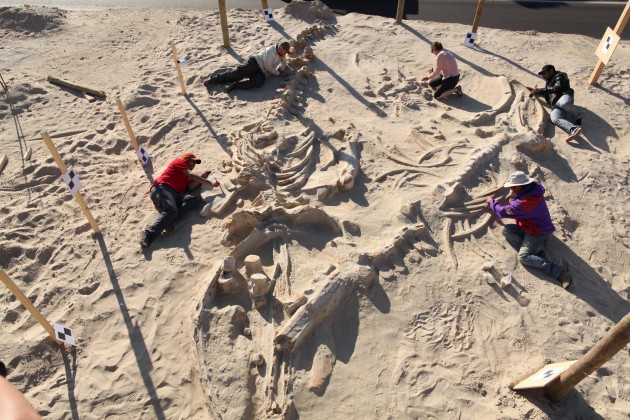 For many years, fossil researchers were taught that the fossil record was incomplete. Nick Pyenson, pondering this problem, acknowledged that yes, it’s true that some time periods have fewer fossils.

But it begged a different question for him—where fossilized remains are preserved in relative abundance, could counts of individuals and species reveal something more significant about actual population sizes and how they were dispersed across the ancient world?

Pyenson studies whales and their ancestors. He realized there is an excellent modern corollary to the counts of animals in the fossil record: data collected from coastal whale strandings. 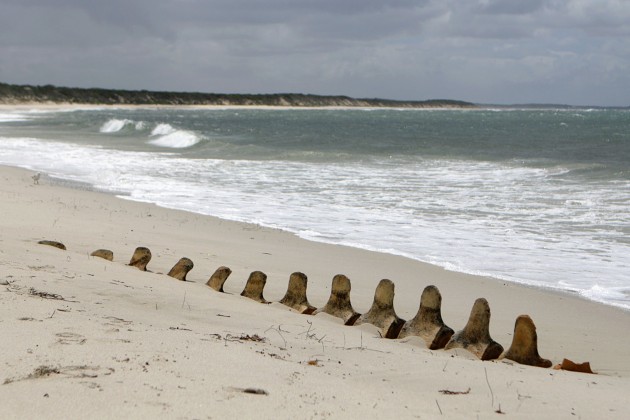 “Whales strand on the coasts around the world,” Pyenson says. “In some stretches, we’ve been counting and generating statistics for decades. When you tabulate all those numbers, you discover that the records of dead things on the coasts tells you more about diversity than any survey of living animals.”

Biologists typically count and measure marine mammal diversity using surveys conducted from boats, planes and cliff heights, but it turns out the death records are far more accurate representations of population and diversity. And because the process of how whales end up on the shore isn’t random—currents carry them there even from the deepest depths—the ratio of common species to rare ones is preserved.

Taking that idea to a recently discovered fossil whale graveyard in Chile, the same patterns were evident, Pyenson said. Common species showed up more often, and rare ones less so, but a full range of species was present. In this case, modern strandings showed a similar pattern for ancient strandings. 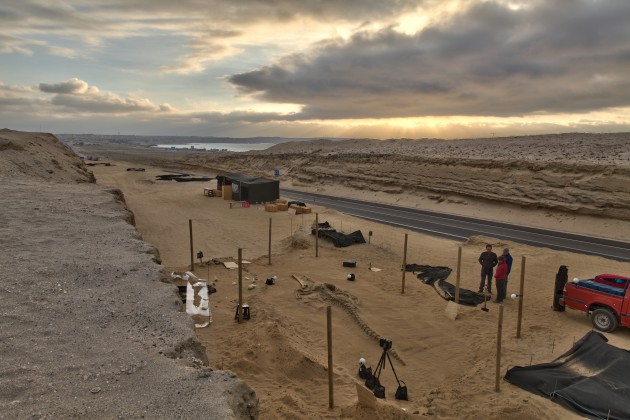 Smithsonian researchers stand near a fossilized whale skeleton in Chile, part of a large group of fossils discovered in a cross-country highway cut.

Modern processes may change all that. The fossil record of whales is, and will be for many years, silent about recent changes, such as whaling that started several hundred years ago, and accelerated declines related to ship strikes, pollution and overfishing. But fossils can illustrate the stark difference between pure ecological processes and human-influenced ones.

“Fossils don’t just tell us about extinct life,” Pyenson said. “In some cases, they faithfully record what life was like in the deep past. Fossils underpin everything. If you want to look at how things came to be, you have to look at how it once was. There are different players moving forward, but there’s an interplay of knowledge between past and present.” 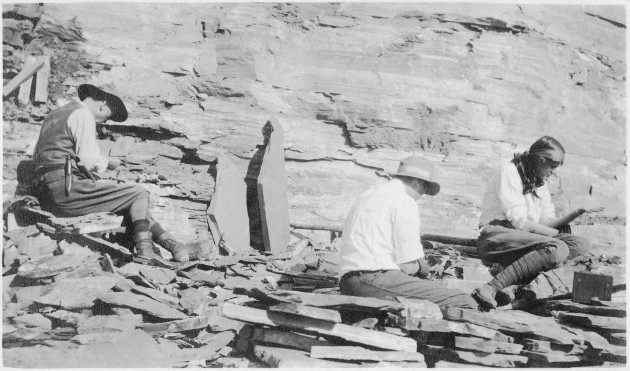 Fourth Secretary of the Smithsonian, Charles Doolittle Walcott, excavates part of the Burgess Shale in Canada with his daughter and son in 1913. (Smithsonian Institution photo)

On the border between the Canadian provinces of Alberta and British Columbia, about two hours west of Calgary, Charles Walcott discovered a strange assembly of fossils in 1909. Two years into his tenure as the fourth Secretary of the Smithsonian, Walcott had unearthed a cache of some of the best-preserved fossils from the Middle Cambrian, some 505 to 510 million years old.

The weirdness of the Burgess Shale animals is one of their defining features. Trilobites abound, as do spiked worm-like creatures and other arthropods, distant relatives of today’s shrimp and pillbugs. Their bizarre forms confounded early attempts to categorize their relationships with each other, or with modern animals.

Some of these creatures had been found before, but never in such numbers or fine detail. Soft tissues of these animals—tentacles, legs, antennae and other structures—show up clearly. 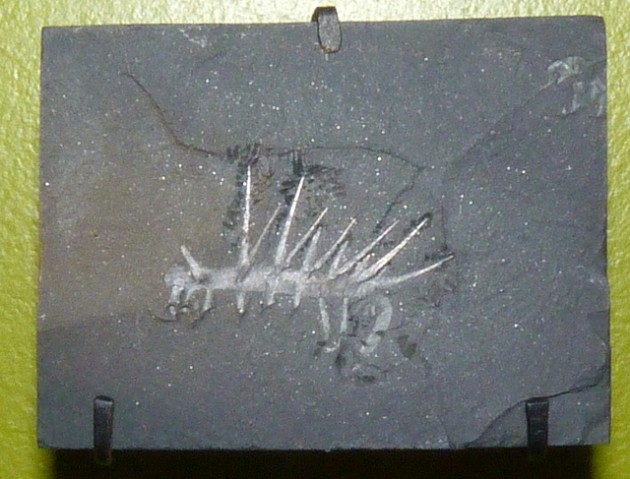 This fossil from the Burgess Shale in Canada shows some of the fine detail of Middle Cambrian specimens preserved there in abundance. (Smithsonian’s National Museum of Natural History collections photo)

Sarah Tweedt, finishing up her doctoral thesis with the University of Maryland through work at the Smithsonian, studies the evolution of how organisms develop. For her, the great diversity represented in the Burgess Shale allows her to ask detailed questions about that evolution.

Plants, animals and fungi, the three kingdoms of multicellular life, all came to their complex body forms independently. As some of the oldest animals in the fossil records, the Burgess fossils may help Tweedt understand more about how ancient animals compare with living ones. They may also shed light on whether animals once developed in different ways, rather than the regimented ways modern animals grow from embryos into adults. 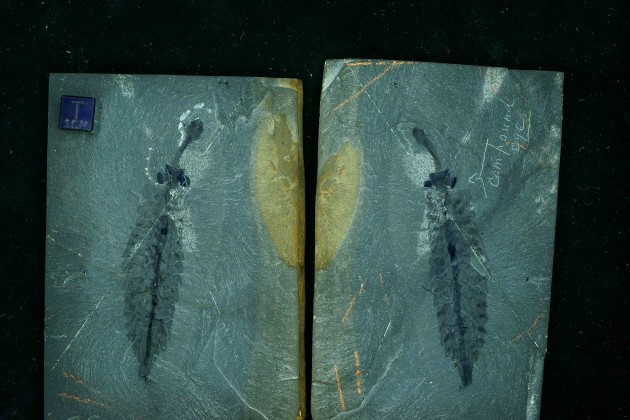 Opabinia regalis, an example of a well-preserved arthropod from the Burgess Shale in Canada. (Photo by Mark Eklund)

Genetic work in the last several decades has revealed that animals as different as fruit flies and humans share genes that dictate morphology, or body structure. This suggests that even the Burgess Shale animals, possibly even including the distant common ancestor of all animals, used similar genetic tools in their development.

“Because animals share a common ancestor, their development is closely linked,” Tweedt says. “Since we know a lot about how genes create morphology, and the Burgess Shale provides these beautiful examples, I can use what I know about living things to better understand how fossils are related to one another. The Burgess Shale organisms are so well preserved that you can make very strong comparisons to living groups.”