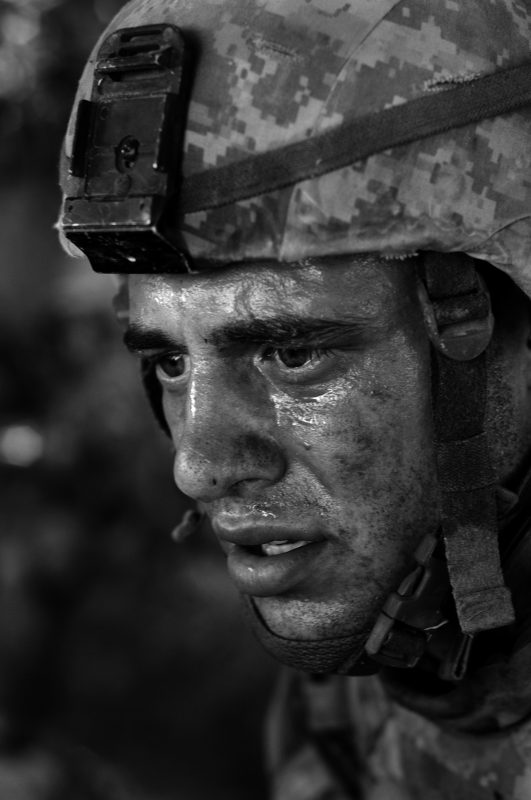 Jun 29, 2009 – Kandahar, Afghanistan – Out of breath, US Army Spc. Larry Bowen age 26, sits shell-shocked in a ditch next to his machine gun after a frontal assault on an insurgent position in close quarter fighting during an operation that lasted  several days in the Taliban stronghold of Siah Choy in Zhari District, Kandahar Province, Afghanistan. (Credit Image: © Louie Palu/ZUMA Press)

“In Fallujah, he was this tobacco-chewin’ hard-ass Marine, scout sniper, the whole thing,” says Gilbertson, whose photo of Bosselmann’s bedroom is on view as part of “The Face of Battle: Americans at War, 9/11 to Now,” which opened April 7 at the Smithsonian’s National Portrait Gallery. “All the ideas you have about the hard-core Marine, he was it.”

But when Gilbertson entered Bosselmann’s bedroom after the Montgomery County, Md., resident was killed in combat in 2004 at age 21, he saw another side of the soldier. 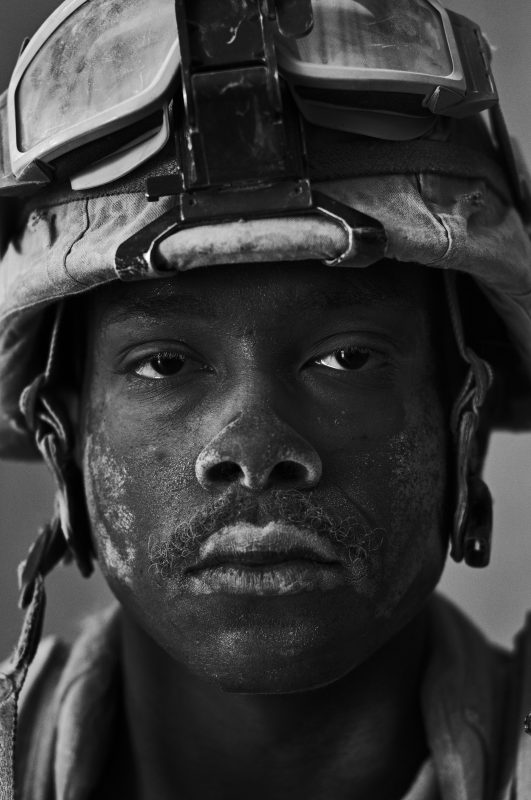 “There are stuffed animals, like foxes, on his bed, because he loved fox hunting,” Gilbertson recalls, eyeing his photographs at a press preview April 6. “On his bookshelf, there were Shakespeare plays, and he would come into D.C. as often as he could to go and see productions of Shakespeare.”

“There’s no way I would have guessed that when I saw this dude chewing and spitting tobacco and shooting people out of a window,” Gilbertson says, “that I would have imagined that he loved Shakespeare, running through the house in his underpants to get a possum that he had shot from his bedroom window.

“The Face of Battle,” is an unflinching look back at the human toll of America’s wars in the Middle East after Sept. 11, 2001. Six featured artists offer their emotional and psychological perspectives of battle and its repercussions: Ashley Gilbertson, Tim Hetherington, Louie Palu, Stacy Pearsall, Emily Prince and Vincent Valdez. Through paintings, drawings, photographs, and a video installation, “The Face of Battle” transforms the toll of war from a vast, inconceivable number into a piercing, hyperspecific portrait of what has been lost to war’s ravages. 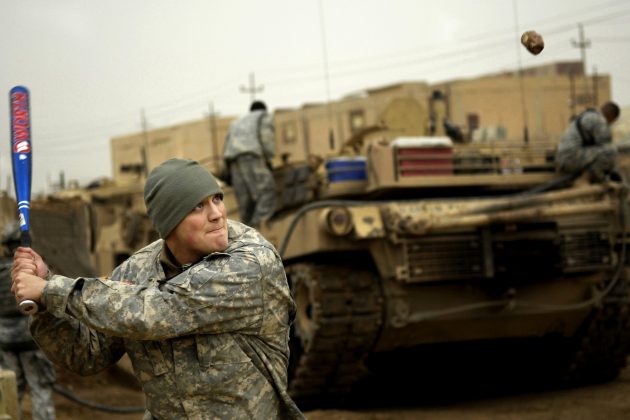 “Apple Pie & Baseball,” by Stacy L. Pearsall, 2007, aluminum print. Downtime is elusive, but when soldiers find themselves with it, theyre very creative. While hanging on the patrol base between combat operations in Kahn Bani Sahd, Iraq, U.S. Army Spec. Timothy McClellan has bat, but no baseballs. Instead, he uses rocks he gathered while on foot patrol to practice his swing on Feb. 6, 2007. (Courtesy of the artist)

In the process, it challenges the American conception of a soldier and a veteran, questions the way their archetypes are used in our society and serves as a call to action supporting those who serve and sacrifice.

“In ‘The Face of Battle’ the distant experience of combat is brought closer through art, serving as a poignant reminder that defending American interests overseas has lasting effect on families and communities,” National Portrait Gallery Director Kim Sajet explains. “Following a long tradition of combat art, the exhibition focuses on the brave soldiers who uphold our freedoms through personal sacrifice.”

The exhibition is a continuation of the Portrait Gallery’s “Portraiture Now” series, devoted to bringing visibility to formal developments in the field of portraiture. Through portraits of deployed soldiers in combat and off duty and representations of empty bedrooms and of lives lost, the artists forge a stronger connection to the personal ramifications of war and reveal deeper perspectives on the lives affected.

Artist Emily Prince, a Stanford University librarian, isn’t from a military family. She had an image in her head, she says, of a “soldier,” but one that turned out to be false as she looked deeper. 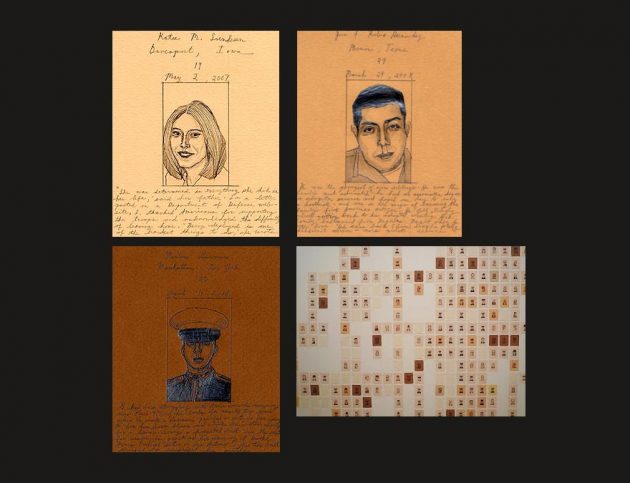 The three portraits by Emily Prince shown here depict soldiers (clockwise from bottom left), Merlin German, killed April 11, 2008; Katie M. Soenksen, killed May 2, 2007; and Jose A. Rubio Hernandez, killed March 24, 2008. The artwork by Price at lower right is titled: “American Servicemen and Women Who Have Died in Iraq and Afghanistan (But Not Including the Wounded, Nor the Iraqis nor the Afghanis).” She created it between 2009 and 2012.

“Before I started, I had a stereotype in mind of what a soldier was,” she says. “That stereotype has been totally eroded in the process of this project.”

Prince has made more than 5,200 small drawings of soldiers who were killed. Fifteen hundred of these are on view in “The Face of Battle,” arranged by date of death as a calendar across three years and three walls.

What Prince found as she researched each subject—a meticulous process demonstrated by her notebooks on view outside the gallery—surprised her, the artist says. 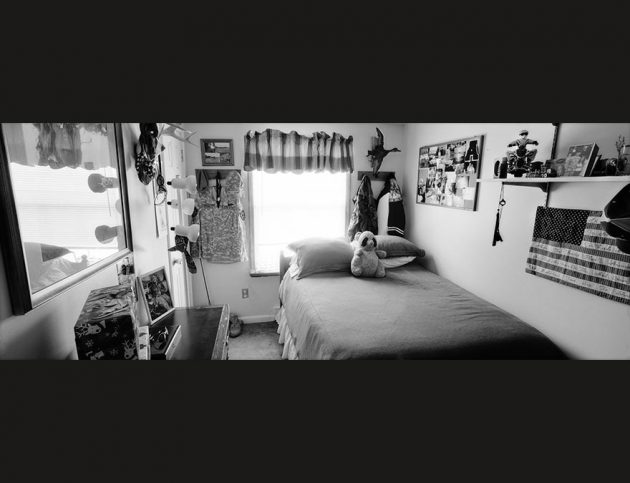 “I would’ve equated in the past, a soldier with some kind of extreme masculinity,” Prince says. “I read about a lot of individuals who didn’t fit that storyline, like soldiers who were also artists, or were soft-spoken, or poets.”

According to the exhibition’s opening text, “The genesis of ‘The Face of Battle’ came about when one of its curators noted while watching baseball on television, how veterans of the Iraq and Afghanistan wars are now used as props to sell products ranging from beer to trucks. These scenes are an effective tug at the heartstrings, but are also emblematic of how America’s engagement in multiple wars since 9/11 has become a routine part of our lives, normalized by such things as advertisements and ‘troop salutes’ at sporting events.” 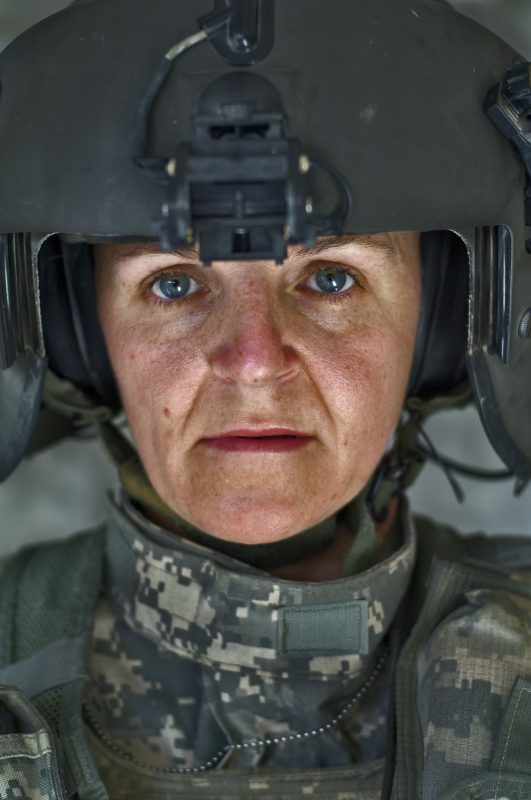 Perhaps the most intimate portrait in “The Face of Battle,” is Vincent Valdez’s oil-on-canvas of his friend since fifth grade, 2nd LT. John Holt, Jr., simply titled John. As an artist, one of Valdez’s interests is “in the ‘Unknown Soldier’ as a masculine archetype of heroic sacrifice and unidentified casualty of war,” co-curator Taína Caragol writes in the Portrait Gallery’s blog facetoface. Caragol worked with Valdez on his portion of the exhibition which is largely a tribute to Holt.

Post-traumatic stress disorder took a toll on Holt, an Army combat medic, after his return from his first tour in Iraq. Valdez met with Holt to work on his portrait and later, after Holt’s suicide, he completed it in 2012. “Through his suicide, Holt came to embody the Unknown Soldier for Valdez. He had known that soldier and felt his loss,” Caragol writes.

The portrait, Caragol continues, “Depicts his friend in the midst of battle, an explosion and billowing smoke behind him, his eyes focused on an ominous sight that is invisible to the viewer and that anticipates John’s demise.” A video by Valdez, Home, and a series of minimal paintings in simple black lines depicting Holt’s military funeral fill a gallery in the exhibition.

“Vincent’s body of work in this exhibition was his way to honor his friend’s sacrifice and to mourn him and he thought it was a beautiful thing that we had taken his work into account and included it in the show,” Caragol says.

“I think ultimately for me the portrait of John becomes my own stance against the endless number of Johns that we’ve produced over the generations,” Valdez explained in a 2013 video documentary about his work. “I think that when the viewer gazes upon John’s face upon that canvas they will encounter an individual who has lost his way, an individual who is in question of why he is there in the first place. He becomes this memory of those who are almost entirely erased in the fog.”

Caragol describes Valdez as “a wonderful artist, very committed to his work. He was absolutely honored to have his work be part of this show, which also has works by Tim Hetherington, who is an artist he admired deeply.”

“‘The Face of Battle,’ allows us to step away from partisan interpretations of the conflicts in which this country has been engaged since 9/11 to look at war from a human and also a humane perspective,” Caragol adds. “The range of artwork chosen connects us to the soldiers’ patriotic commitment, their camaraderie, as well as to the physical and psychological traumas of war and the loss of life. It is a somber subject matter and a reflection that is absolutely necessary in order to begin to understand the impact on this country of wars fought so far away from its shores.”