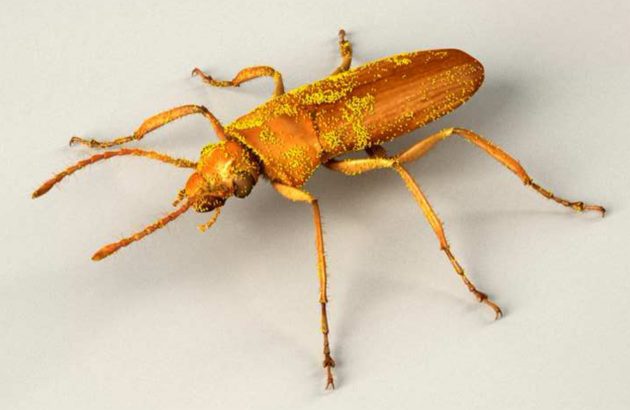 This 3D model of “Darwinylus marcosi” shows how the beetle may have looked before it became stuck in tree resin 105 million years ago. The distribution and density of pollen on “D. marcosi’s” body is inferred from the density of the shed pollen in the amber surrounding the beetle. (Image Courtesy José Antonio Peñas, digital scientific illustrator from Madrid, Spain).

Named for Charles Darwin, the only known specimen of a newly discovered beetle, Darwinylus marcosi, died in a sticky battle in a gob of tree sap some 105 million years ago in what is now northern Spain. Today, that fossil is shedding new light on the various ways insects pollinated plants during the mid-Mesozoic.

As it thrashed about before drowning, more than 100 clumped pollen grains were dislodged from its body and released into the resin. Five grains remained stuck to the beetle itself. Preserved with the beetle in the now-hard amber, the grains reveal that the beetle had been chewing a pollen meal with its mandibulate mouthparts just before it died.

Scientists familiar with this era in earth’s history, the mid-Mesozoic, didn’t ponder long about what flowers produced this pollen. The answer is none. This amber dates to a time when flowering plants (angiosperms) were just getting launched globally and the earth was overwhelmingly dominated by diverse plant species such as non-flowering cycads, ginkgoaleans, bennettitaleans and conifers—the gymnosperms.

Many gymnosperm-pollinating insects flourished during this time, explains Paleobiologist Conrad Labandeira at the Smithsonian’s National Museum of Natural History. Scorpionflies, lacewings, flies and moths with long, straw-like proboscises sipped pollination drops. Pollination drops are a liquid similar to the nectar of flowering plants and originate from deep funnel-like holes in pinecone-like structures and other gymnosperm ovule-bearing organs. 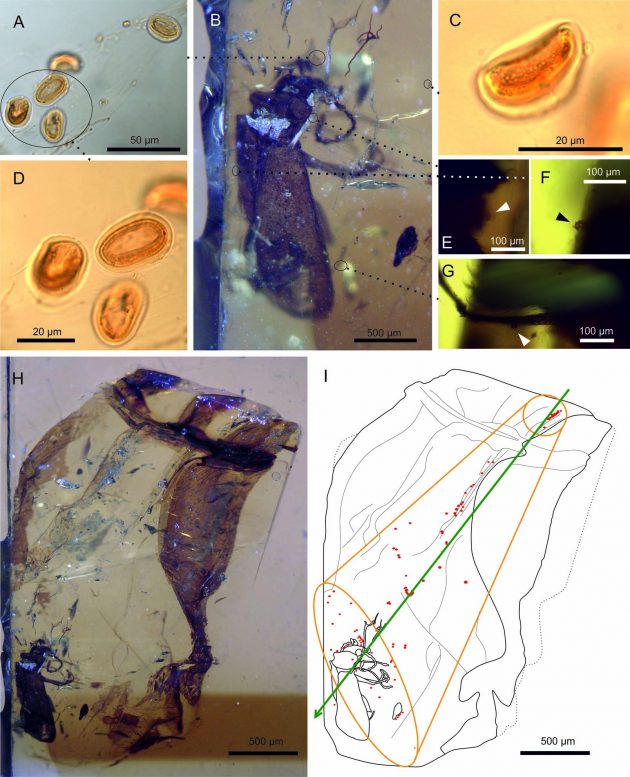 Image A shows loose pollen grains from a gymnosperm plant, enlarged in images C and D, trapped in 105 million-year-old amber with the newly discovered beetle “Darwinylus marcosi.” The beetle with the pollen in amber is shown in image H. Photos E, F and G show pollen grains from a gymnosperm that are stuck to the surface of the beetle. Scientists conjecture the resin covered the beetle in the direction of the green arrow in illustration I and scattered the pollen grains loose from the beetle’s body. (Image courtesy David Peris, Departament de Ciències Agràries I del Medi Natural, Universitat Jaume, Castelló de la Plana, Spain).

Flies with sponge-like mouthparts also lapped-up this sweet plant nectar. Thrips with punch-and-suck mouthcone mouthparts drained the nutritious juices by cracking pollen grains, performing a different type of pollination. All three of these insect-pollinator feeding modes have been confirmed in 165- to 105-year-old amber and stone fossils that show gymnosperm pollen clinging to various mouthpart structures, heads and bodies of these insects.

Now, the discovery of D. marcosi in Spanish amber is proof of a fourth major insect pollination mode that also dates to the mid-Mesozoic: beetles with biting or mandibulate mouthparts and a chewing feeding style. This amber fossil is the “… first, direct evidence of a fourth major gymnosperm–insect pollination mode during this time,” Labandeira says. An article co-authored by Labandeira about this discovery was published today, March 2, in the journal Current Biology.

This discovery is important, Labandeira says, “… as it reveals the broad pattern of four distinctive pollinator modes that were present before the dominance of flowering plants between 125 and 90 million years ago.” These pollinator modes, or major association types, survive to the present day, although the particular plant and insect participants are mostly long gone. 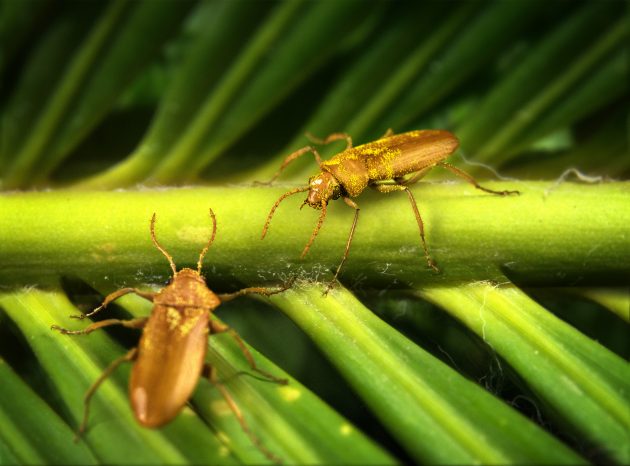 Reconstruction of the Early Cretaceous “Darwinylus marcosi” beetle on a gymnosperm host. Based on the pollen grains found in the amber with the beetle, scientists believe that the beetle was closely associated with cycads—an ancient gymnosperm group of plants that have living relatives today throughout the warmer parts of the world. Modern cycads are commonly confused with palms due to their roughly similar appearance, though relatively distant evolutionary relationship. (Courtesy of Enrique Peñalver, Museo Geominero, Instituto Geológico y Minero de España, Madrid, Spain).

“D. marcosi ingested gymnosperm pollen for nutrition, chewing it with their mandibles, and in the process they got covered with the stuff,” Labandeira says. “They then moved from the male part of the plant to the female part and caused pollination. Some of the most nutritious food that a seed plant has to offer are in the protoplasts of pollen. When pollen is extracted by crushing beetle mouthparts and gut digestion, it is pretty nutritious.”

D. marcosi is the only known instance of a mid-Mesozoic pollinator with biting and chewing mouthparts. Insects with long straw-like proboscises are a different story. “Overwhelmingly, they are the best represented of all mid-Mesozoic pollinators with 38 described species representing four orders of insects: lacewings, scorpionflies, true flies and moths,” Labandeira says. He and his colleagues estimate that during the Mesozoic, gymnosperm-pollinating insects with long-proboscid mouthparts evolved independently 10 to 13 times.

“These insects had long proboscises that they inserted into a very specialized ovulate structure of a gymnosperm to sip up pollination drops, which is similar to angiosperm nectar. They deposited pollen in the process. For these insects the reward was the nutritious pollination drops.” For other pollinators, it was equally nutritious protoplasm inside the pollen grains.” 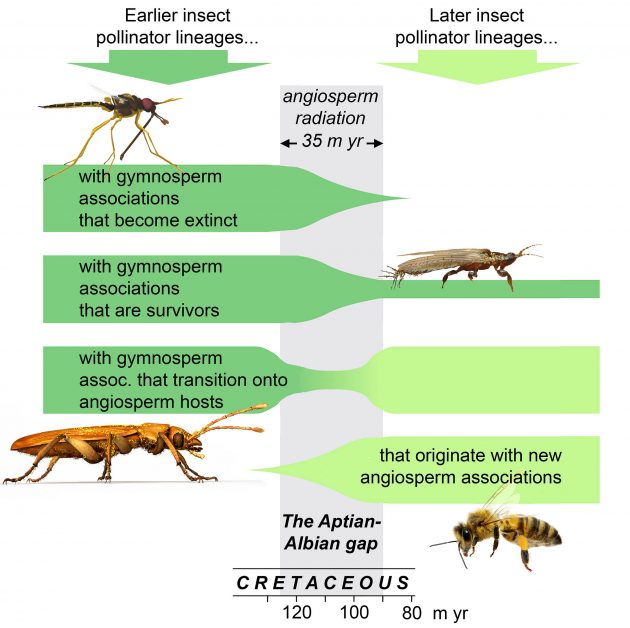 Different ecological-evolutionary groups of insect pollinators either survived, originated or went extinct in the transition from gymnosperm to flowering plant dominance. Many gymnosperm pollinators, such as the beetle “Darwinylus marcosi,” made a successful transition to angiosperms. Other pollinators, such as bees, originated during or after flowering plants evolved and have no gymnosperm associations in their history. Some insect pollinators, such as some long-proboscid flies that depended upon gymnosperms, couldn’t make the transition and went extinct. Another group, including certain thrips, retained their associations with gymnosperms and survived, but saw a major drop in their diversity. (Graphic courtesy Conrad Labandeira and Finnegan Marsh, Department of Paleobiology, National Museum of Natural History, Washington, D.C., and José Antonio Peñas, digital scientific illustrator from Madrid, Spain).

“Many early gymnosperms had strange cone-like, flower-like or other unconventional pollen producing organs and ovule-containing organs that secreted pollination drops and had odd nectary-like structures,” Labandeira says. “These structures bear no resemblance to today’s pine cones and there is really no good analogue for them with anything alive today that I can think of.”

In the Cretaceous, many gymnosperms and the insects that pollinated them went extinct in a world-wide shake-up during the Aptian-Albian Gap between 125 to 90 million years ago. This was a a period well-documented in the fossil record where gymnosperm diversity plunged and flowering plants came to dominate the earth. It was a 35-million-year-long transition from a gymnosperm- to an angiosperm-dominated global flora.

Insects that made the transition from gymnosperms to angiosperms did so while retaining basically the same mouthpart types, Labandeira says, in part because most pollinated a variety of generally unrelated plants with similar pollen producing and ovule-bearing organs. “The protoplasts of gymnosperm pollen are virtually the same as that of angiosperm pollen,” Labandeira says. “Gymnosperm pollen drops and angiosperm nectar originate in very different tissues but also are very similar in composition and in almost all other properties, including nutritional content.”

The research team for this study included collaborators with Universitat Jaume I and University of Barcelona in Spain; the Geological and Mining Institute of Spain; the Smithsonian’s National Museum of Natural History, Harvard University and the University of Maryland in the United States; and Capital Normal University in China.