Amber from Cretaceous deposits (110-105 million years ago) in Northern Spain has revealed the first-ever record of insect pollination. Scientists have discovered several specimens of tiny insects covered with pollen grains in two pieces of amber, revealing the first record of pollen transport and social behavior in this group of animals. The results are published in the Proceedings of the National Academy of the Science (PNAS) dated 14-18 May 2012. 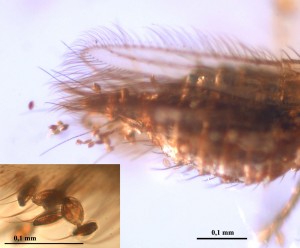 Image right: Gymnosperm pollen attached to the abdomen and wing of a thysanopteran from the Alava amber (Credit: Enrique Peñalver, IGME).

The international team of scientists comprises: Enrique Peñalver and Eduardo Barrón from the Instituto Geológico y Minero de España in Madrid; Xavier Delclòs from the University of Barcelona; Andre and Patricia Nel from the Muséum national d’histoire naturelle in Paris; Conrad Labandeira from the Smithsonian’s National Museum of Natural History in Washington D.C.; and Carmen Soriano and Paul Tafforeau from the European Synchrotron Radiation Facility in Grenoble, France. The amber samples were from the collection of the Museo de Ciencias Naturales de Álava in Spain.

Today, more than 80 percent of plant species rely on insects to transport pollen from male to female flower parts. Pollination is best known in flowering plants but also exists in so-called gymnosperms, seed-producing plants like conifers. Although the most popular group of pollinator insects are bees and butterflies, a myriad of lesser-known species of flies, beetles or thrips have co-evolved with plants, transporting pollen and in return for this effort being rewarded with food. 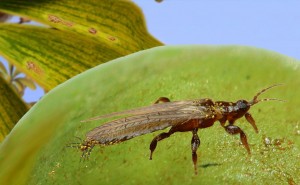 Image left: An artist’s conception of of Gymnospollisthrips with pollen attached to the body over an ovulate organ of a gingko (Credit: Enrique Peñalver, IGME).

During the last 20 years, amber from the Lower Cretaceous found in the Basque country in Northern Spain has revealed many new plant and animal species, mainly insects. Here, the amber featured inclusions of thysanopterans, so-called thrips, a group of minute insects of less than 2 millimeters long that feed on pollen and other plant tissues. They are efficient pollinators for several species of flowering plants.

Two amber pieces revealed six fossilized specimens of female thrips with hundreds of pollen grains attached to their bodies. These insects exhibit highly specialized hairs with a ringed structure to increase their ability to collect pollen grains, very similar to the ones of well known pollinators like domestic bees. The scientists describe these six specimens in a new genus (Gymnopollisthrips) comprising two new species, G. minor and G. major.

The most representative specimen was also studied with synchrotron X-ray tomography at the European Synchrotron Radiation Facility to reveal the pollen grain distribution over the insect’s body in 3D and at very high resolution. The pollen grains are very small and exhibit the adherent features needed so that insects can transport them. The scientists conclude that this pollen is from a kind of cycad or ginkgo tree, a kind of living fossil of which only a few species are known to science. Ginkgos are either male or female, and male trees produce small pollen cones whereas female trees bear ovules at the end of stalks which develop into seeds after pollination. 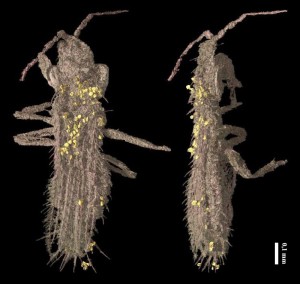 Why did these tiny insects collect and transport gingko pollen 100 million years ago? Their ringed hairs cannot have grown due to an evolutionary selection benefiting the trees. The benefit for the thrips can only be explained by the possibility their larvae ate pollen. This suggests that this species formed colonies with larvae living in the ovules of some kind of gingko for shelter and protection, and female insects transporting pollen from the male gingko cones to the female ovules to feed the larvae and at the same time pollinate the trees.

More than one hundred million years ago, flowering plants started to diversify enormously, eventually replacing conifers as the dominant species. “This is the oldest direct evidence for pollination, and the only one from the age of the dinosaurs,” says Carmen Soriano, who led the investigation of the amber pieces with X-ray tomography at the ESRF. “The co-evolution of flowering plants and insects, thanks to pollination, is a great evolutionary success story. It began about 100 million years ago, when this piece of amber fossil was produced by resin dropping from a tree, which today is the oldest fossil record of pollinating insects. Thrips might indeed turn out to be one of the first pollinator groups in geological history, long before evolution turned some of them into flower pollinators.” —Source: European Synchrotron Radiation Facility