Smooth and shiny, the tough body of the South African beetle Pedinorrhina trivittata, a flower eater, appears to be a non-inviting surface for pollen grains to stick. Specimens of this beetle collected from flowers by scientists bear this out, coming in with little or no pollen attached to their bodies.

High-resolution photographs of these insects on acacia flowers in Kruger National Park, however, tell a different story. The beetles’ bodies, both top and bottom, are covered in pollen grains. “It was a real surprise,” says Jonathan Mawdsley, an entomologist at the Smithsonian’s National Museum of Natural History in Washington, D.C. “When we collected them whatever pollen they had on their bodies would fall off. But in the photographs the beetles have a lot of pollen sticking to their bodies, collecting in corners and other places.” 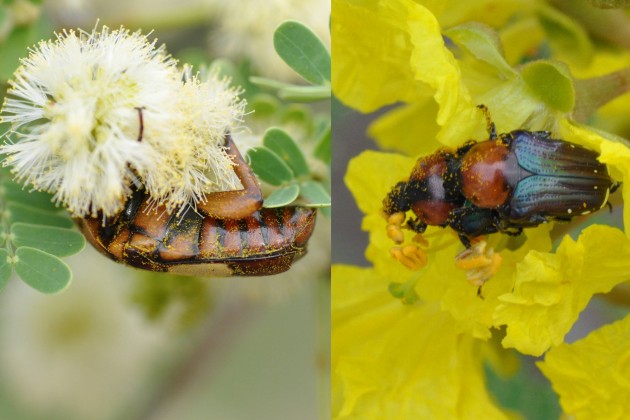 In recent years, Mawdsley and other entomologists working in Kruger National Park have turned to high-resolution digital photography to help them better understand how insects pollinate and interact with plants. In addition to collecting insects, they now take digital images as the insects feed on flowers and plants, photographing them from the top, bottom, side and front whenever possible.

When they began taking digital images in 2006, the original intent was to simply record the associations between insects and flowering plant species, the scientists say. Yet in reviewing the photographs and enlarging them on their computer screens, they found the images also captured many unseen aspects of insect behavior, such as how they feed, their contact with the reproductive parts of a flower, their movement between flowers and how they acquire pollen on their bodies.

“The photographs confirmed observations that these beetles consumed floral parts as well as nectar and pollen, that beetles walk as well as fly between flowers, and that beetles utilize other portions of the plant besides flowers for resting,” Mawdsley and colleagues write in a recent paper in the African Journal of Ecology. 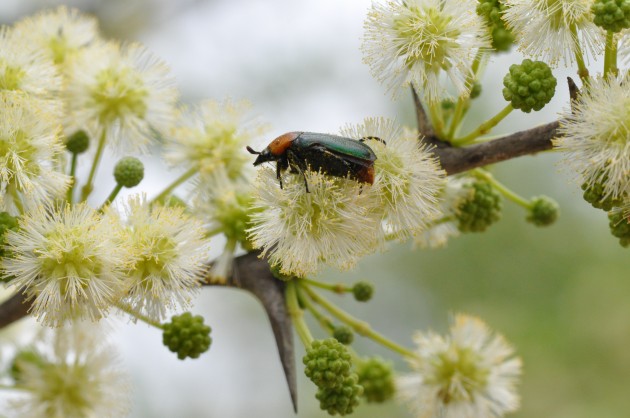 “Kruger National Park is unique in that it supports a full spectrum of large mammals, from white and black rhinos, to giraffes, lions, leopards, cheetahs, and an incredible diversity of antelope,” Mawsdley says. Because many large and small herbivores are browsers that depend upon on trees and shrubs for food, Mawsdley and his colleagues have been conducting a survey for the Park of the important pollinators upon which Kruger’s trees and shrubs depend. “Beetles and bees, social and solitary are the two major groups that we find on flowers performing pollination,” Mawdsley says. “There are also some moths and birds.”

“We discovered, by looking closely at some images, that they actually recorded the amount of pollen on an insect’s body, where it was located and the pollen’s quality,” Mawdsley explains. “We were even able to enlarge some images to the point where we could count individual pollen grains.” As pollen from different plant species has different colors and shapes, the team is now experimenting with ways to program a computer to count and quantify the pollen loads on an insect in a photograph. 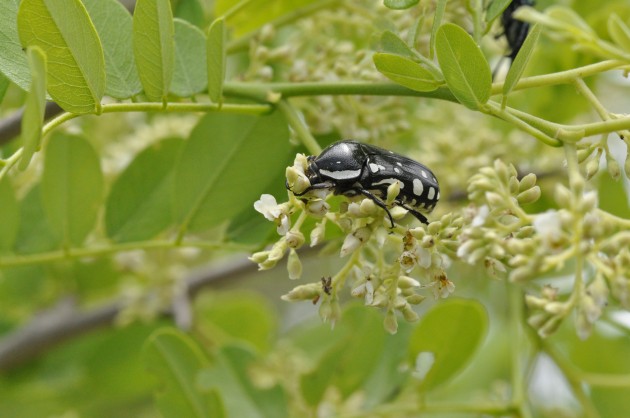 Presently, Mawdsley and his colleagues are also in the process of working out a research agreement with South African National Parks supporting the development of a database and archive of the images that will be available worldwide over the internet.

“High resolution digital photography offers considerable utility for a wide range of pollination studies,” the researchers write. “Photography is a noninvasive approach which circumvents the killing or even handling of insects and the associated disruption of pollinator-flower interactions.” –John Barrat