Antarctica is home to fewer insect species than anywhere else on earth. But it wasn’t always that way.

A geologist digging in bluffs on Antarctica’s Beardmore Glacier has discovered the fossil remains of a previously unknown beetle species that lived during the Mid-Miocene some 14 to 20 million years ago. 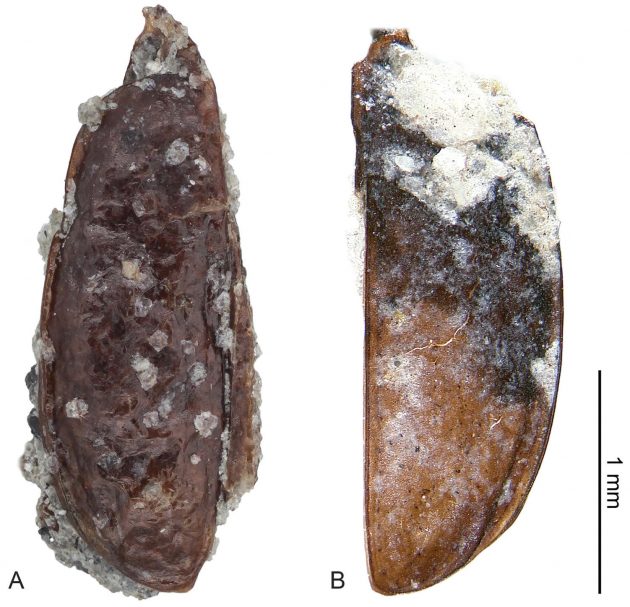 Fossils of the left and right elytra of “A. balli” discovered recently in Antarctica.

Described by Smithsonian Entomologist Terry Erwin and named Antarctotrechus balli, or Ball’s Antarctic tundra beetle, the insect’s remains were found in a sediment layer that also contained fossils of southern beech trees, buttercups, moss and other plants from a sparsely-vegetated stream bank.

A cold-adapted beetle, A. balli probably lived under rocks and at stream sides in cold gravel, says Erwin, a beetle expert at the Smithsonian’s National Museum of Natural History. He was co-author with North Dakota State University Geologist Allan Ashworth on a paper in ZooKeys announcing the discovery.

Two elytra, the beetle’s hard protective wing coverings, were the only body parts discovered from the fossil beetle, but their shape suggests A. balli could probably fly, Erwin says. “One indication that a beetle has flight wings is if the shoulder of its elytron is kind of square. A beetle that doesn’t fly has rounded, ovoid-shaped elytra. These fossil elytra do have shoulders, so this beetle probably had wings and it probably flew.” 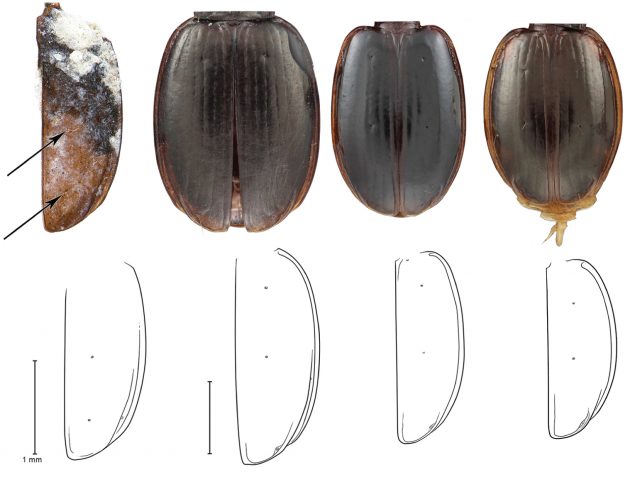 Fossil of the right elytron of “A. balli” compared with the elytra of three closely related modern beetles.

A. balli also was probably a fast runner. “It has a lot of living descendants and all of them are quite fast runners,” Erwin said. “They are predators with prognathous [projecting] mandibles, so they are running round grabbing things—such as other smaller insects—to eat. At the same time, bigger things are chasing and eating them.”

The beetle was an Antarctica native, a holdout from a much warmer time hundreds of millions of years ago when Antarctica was not an isolated ice-covered continent, but part of a single land mass where it, South America and Australia were co-joined.

Today, A. balli’s closest living relatives—members of a beetle tribe called the trechines—are found in cold southern parts of the globe, “all the way down at the tip of Tierra del Fuego in Chile and Argentina. Another relative is in the very southern part of Tasmania and also on Georgia Island,” Erwin explains. Other trechine species live in the northern parts of the world on high mountains, so it is a cold-adapted beetle tribe, for the most part. 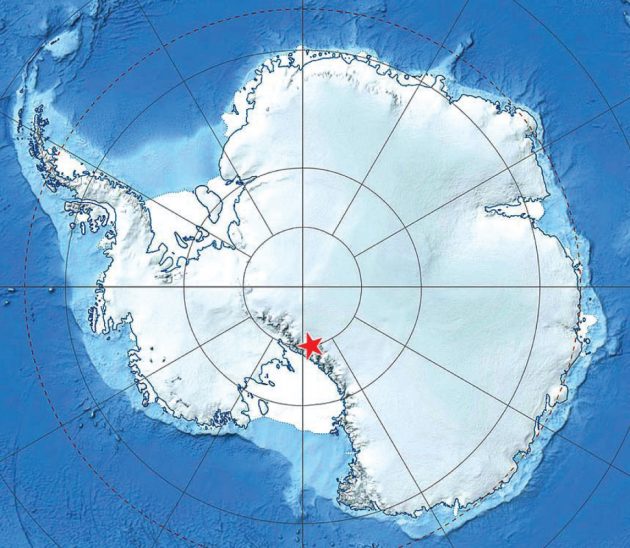 The star on this map of Antarctica indicates where the new fossil beetle was found.

“Many beetle lineages are cold adapted,” Erwin continues. “Some species of the genus Nebria hide in the day under glaciers and come out at night to feed at the top of the glaciers on wind-drifted insects. These kinds of species have adults with ‘antifreeze’ in their blood.”

During their life cycle beetles are the most vulnerable to frigid temperatures during the larval stage. “Hence it is a short-time stage in the most favorable part of the year,” Erwin adds.

In the last 14 million years, Antarctica became so cold that even A. balli could no longer survive there. As the ice sheet started spreading, A. balli and other insects most likely clung to patchy vegetated areas at the continent’s edges. Allen and Erwin believe A. balli probably went extinct in the interior part of Antarctica first, and survived in the edge shrub tundra until much later. Ice finally covered the entire continent.

With global climate change, chances are good Antarctica may once again support vegetation and beetle populations. “It would not take much of a warming trend at the edges of Antarctica to allow such beetle species to colonize from, say, Tierra del Fuego,” Erwin says.

“That’s exactly what has happened in cycles over millions of years. If you go back a really long time in the fossil deposits of Antarctica there are plenty of insects living there when Antarctica was connected to other continents. Modern Antarctica is isolated. There’s just nothing there now, but there has been.”

Aerial insect surveys done high up in airplanes with nets have revealed a lot of insects are dispersed by Polar winds, Erwin says. “So if that is happening and plants begin growing on Antarctica because it is warming up a little bit, then those insects have a means of dispersing from Australia or Tasmania or southern South America and repopulating Antarctica. That’s how it would happen, but it would have to be warm enough for them to go through their life cycle.”

Erwin and Ashworth named the beetle after the continent on which it was found, (Antarctotrechus) and for beetle expert George E. Ball (balli), who made many contributions to the study of beetles through his own work and was an academic leader to a host of younger carabidologists. Ball is from the University of Alberta, Canada and the beetle was named in celebration of his 90th birthday, Sept. 26, 2016.

Although Erwin says it was a surprise to be asked by Ashworth to describe a beetle from Antarctica, he is certain other insect fossils exist in the same sediments that contained A. balli. In fact, two other insects fossils—an extinct weevil and fly—predate the discovery of A. balli in these sediments.

“I have no doubt that they are there, it just takes a lot of money (and warm clothes) to run an expedition into the center of Antarctica,” Erwin says.