What: A newly discovered species of plant eating bug belonging to the family Blissidae, members of which are found worldwide. W. muhlenbergiae also represents a new genus. It is roughly a little longer than one tenth of an inch. It has wings but cannot fly.

When: Named and described in the April 2015 issue of the scientific journal Proceedings of the Entomological Society of Washington, by Thomas J. Henry (USDA Systematic Entomology Laboratory/Smithsonian’s National Museum of Natural History) and Merrill H. Sweet (New Mexico State University).

Where: Collected on native grasses in the Arbuckle Mountains of southcentral Oklahoma and on Edwards Plateau in westcentral Texas. The voucher specimens from which this species was described are held in the Smithsonian’s National Museum of Natural History, Washington, D.C; New Mexico State University, Las Cruces; and Texas A&M University, College Station. 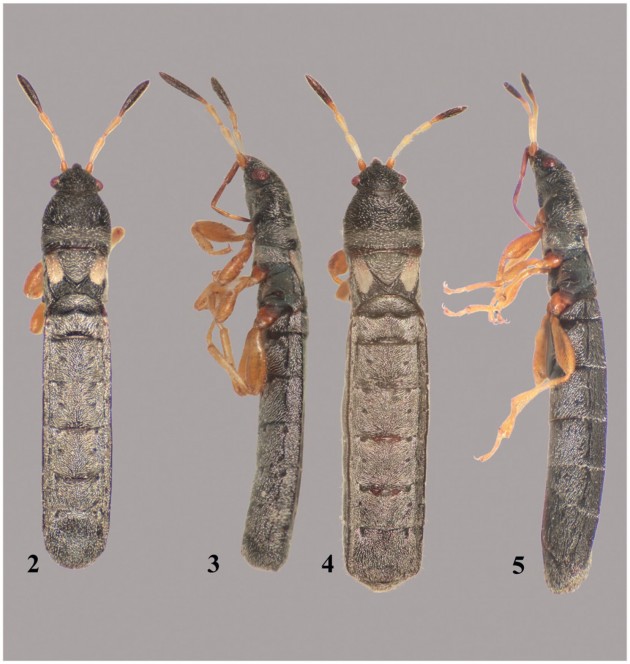 Why: Blissidae feed exclusively on the sap of monocots and cause millions of dollars in damage annually in the United States to turf grasses and agricultural crops. “These bugs are sap suckers, so to speak,” Henry says. “The whole family of Blissidae are restricted to monocots: grasses, bamboo, and plants like that. They actually suck the chlorophyll from the grasses causing it to turn whitish and die.”

One of the most destructive members of this family is the northern chinch bug, “which in corn and sorghum feed inside the leaf layers along the stem and at the base on the roots,” Henry says. “Sometimes you can find hundreds on one plant, around the base sucking the juices out of the plant, resulting in serious injury.”

Although W. muhlenbergiae is not considered a pest, any new species of this family is of interest to agricultural research scientists.