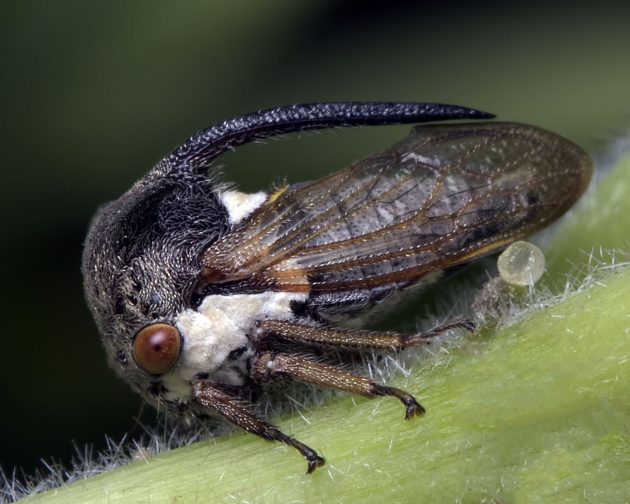 When a mosquito lands and begins to feed, the saliva it deposits in the skin stops blood from coagulating and makes the bite itch. A much different insect, the treehopper, has similar sucking mouthparts that can penetrate a tree’s bark to eat its sap. Its saliva prevents a tree from closing up the bite area.

Like mosquitoes, treehoppers and their close relatives, leafhoppers, spread diseases, sometimes deadly, to their hosts. This is why USDA Systematic Entomology Laboratory scientist Stuart McKamey receives treehoppers and leafhoppers in the mail nearly every day at his office in the Smithsonian’s National Museum of Natural History, in Washington, D.C.

When agents from the U.S. Animal Plant Health Inspection Service need the swift ID of an undetermined treehopper species found in incoming shipments of say, cut flowers from the Netherlands or basil from Mexico, they pop a few into a vial of alcohol and send the dead bugs overnight to McKamey. Other times they send high-quality digital images, which are sometimes enough for identification. 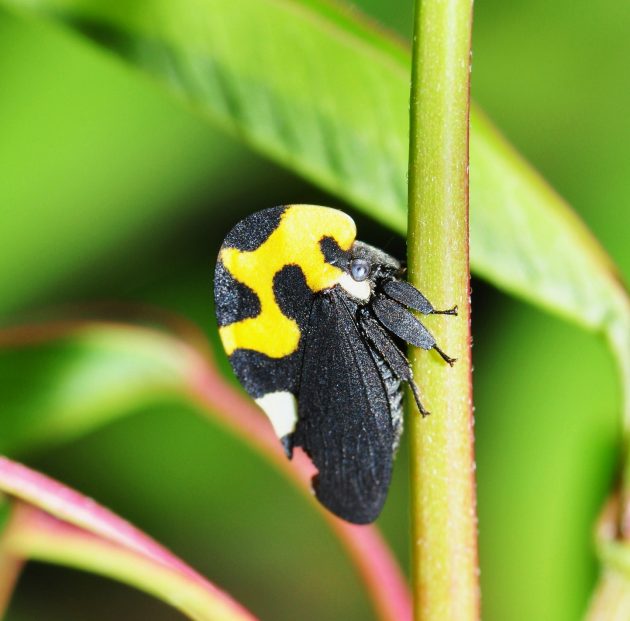 “Many requests are urgent,” McKamey says. “A large ship may be paying port costs while its cargo awaits clearance, so we drop whatever we are doing and identify the insect.” After McKamey identifies the treehopper species in question, APHIS follows up with the necessary actions: fumigate the cargo, destroy it, send the shipment back, or proceed into the United States.

McKamey authored a recent paper in the journal Zootaxa in which he named two new treehopper species:  Cyphonia sakakibarai from Brazil, and Poppea unispina from Costa Rica, both of which are unusual in that they differ in form and color from existing species. Insider spoke with McKamey to learn more about treehoppers.

Q: How did these insects get the name “treehopper”?

McKamey: They most often occur on trees, sometimes on grasses or shrubs, but most often on trees. “Leafhopper,” “froghopper” and “planthopper” are names already taken by their close relatives.  Grasshoppers are an entirely different order of insects, meaning that they are as distantly related to treehoppers as beetles. 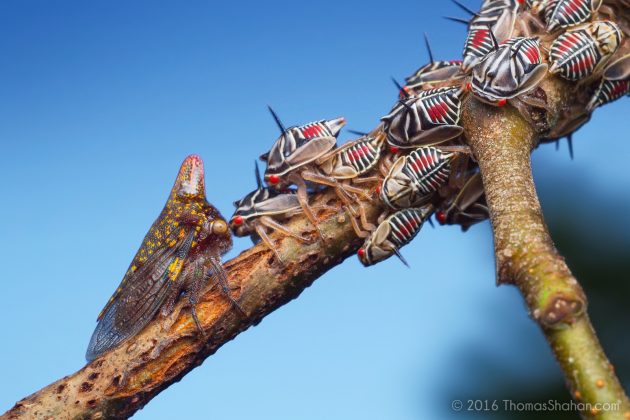 Q: Mosquitoes eat quickly and fly away. How long do treehoppers eat?

McKamey: They can suck on plant juices for maybe a month. They don’t necessarily move once they have found a good spot. They feed day and night. Some move more frequently because they feed on faster growing plants.

There is one group on fast-growing plants where the nymphs aggregate and feed at a tip of a plant where the nitrogen is highest. Once they use up that tip they disperse around the plant and when one finds a good spot it starts doing a single vibration, which is a tap. Another one hears it and goes and joins it and then you have two taps. Eventually, they all gather at this new high-quality location.

Their mouthparts have two sharp tubes. One injects saliva, which for a treehopper keeps the tree’s defense from closing up the hole, the other is a sucking tube. 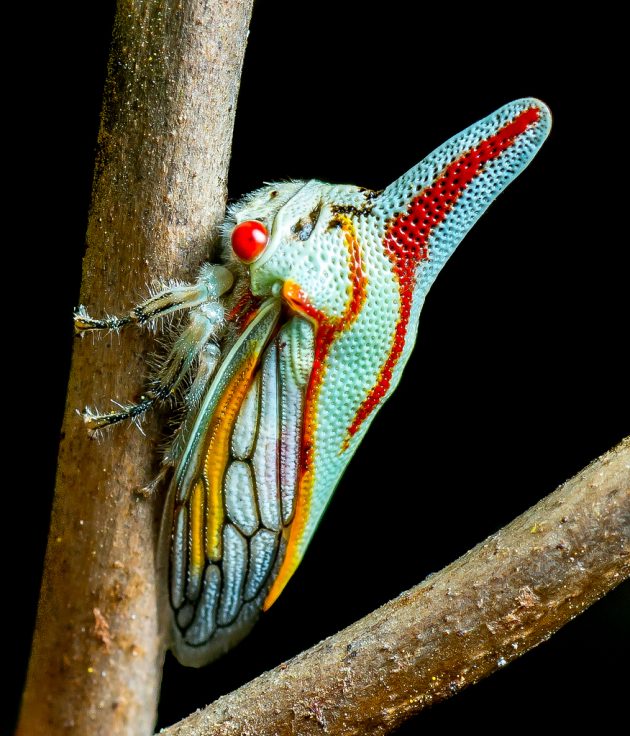 Like a malaria mosquito, if they feed on a plant that has a disease and then go feed on another plant, they transmit the disease from the first to the second plant. This is why they are so important economically.

Q: Locally, how can I recognize a treehopper from other insects?

McKamey: What distinguishes them visually is that their pronotum—the protective plate at the front of insect’s thorax—is expanded up and over the body.  In some species, the pronotum resembles a thorn [they are often called “thorn bugs”], but in others, it takes other bizarre shapes. In most other insects, such as leafhoppers, cicadas, beetles, and bees, the pronotum is just a simple band from one side to the other.

In the northeastern U.S. treehoppers are found on trees feeding usually in the area where a branch joins a limb. It’s probably too late to see treehoppers in the eastern United States now. May and June are the best months to see them. To learn more go on the treehoppers Website, search for the tribes Smiliini and Telamonini and you can see pictures of the treehopper genera found around here. Smiliini and Telamonini have diversified on oak trees and feed on the new growth on the small stems. You won’t find them feeding on leaves. Treehoppers range from about two millimeters to two centimeters in size and will jump and fly off when disturbed. 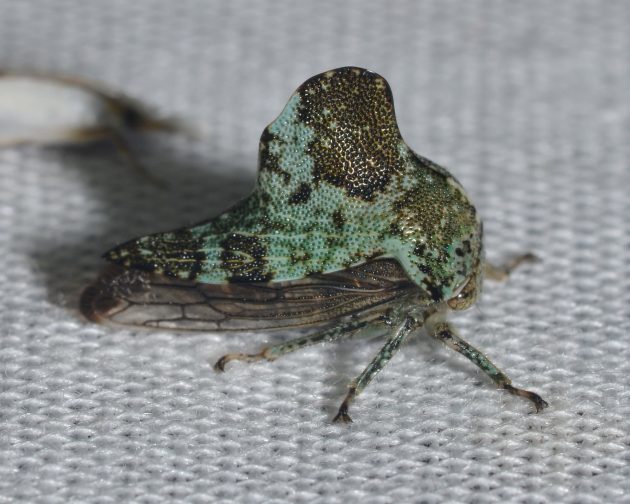 Q: How do you identify the treehoppers you receive from APHIS so quickly?

McKamey: In the Smithsonian’s National Museum of Natural History there are specimens in the collection for almost half of the described species that I use as a reference, matching treehoppers I receive from APHIS and elsewhere with identified insects in the collection. Literature resources make up the difference.

Treehoppers cause damage to many crops and horticultural plants, such as citrus, avocado, blackberry, maples, and willow.  To communicate effectively about these pests, it is essential that every species has a name. Describing and naming new species that have an economic impact on crops is part of my job here. 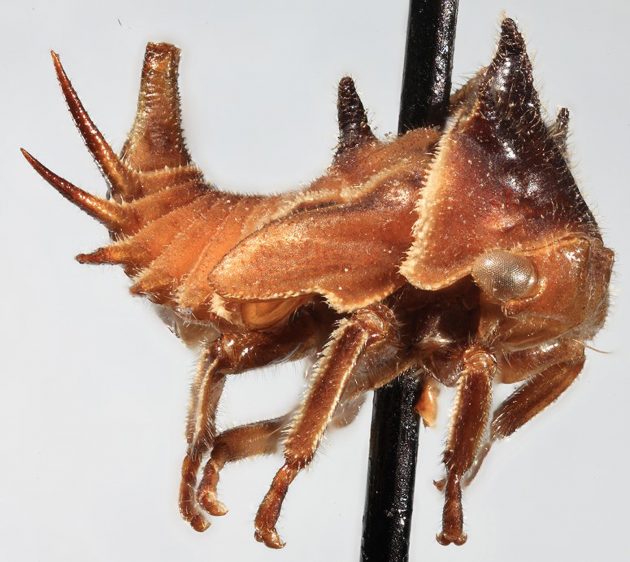 “Leptocentrus reponens,” a pinned treehopper specimen in the Entomology Department of the Smithsonian’s National Museum of Natural History.

There are many treehopper and leafhopper groups that have received little attention and therefore contain undescribed species. One such group that I am currently working on contains about 16 genera (half new) and around 700 species (650 new). In total there are 3,400 known treehopper species, and I would guess at least 10,000 undescribed.

My other responsibilities include serving as curator of the “hopper” section of the Smithsonian’s National Entomology Collection (leafhoppers, treehoppers, and their relatives), and identifying these insects intercepted in ports and sent in by universities. 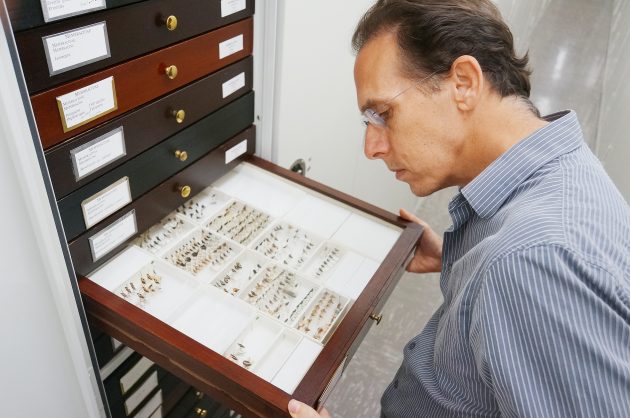 USDA Systematic Entomology Laboratory scientist Stuart McKamey examines a few of the hundreds of thousands of treehopper specimens maintained in the collections of the Entomology Department of the Smithsonian’s National Museum of Natural History. (Photo by John Barrat)

Q: In what other ways do treehoppers stand out from other insects?

McKamey: A second thing that sets treehoppers apart from many insect groups is that the mother will sit on her eggs to guard them against parasitoid wasps or ants or whatever. She lays about 60 eggs, sometimes on the surface of a limb or leaf but more often inserted into the stem, and she sometimes covers them with a wax-like substance. Sometimes the mother inserts the eggs more deeply inside a gash she’s made in a tree’s bark so they cannot be seen.

If an intruder approaches, some treehopper moms will actually wave their front limbs at or kick at an attacker with their hind legs. In one group, the group in which kicking is most prevalent, just before her eggs hatch the mother goes down the branch a little bit and makes punctures in the woody tissue for her nymphs to feed through. She then sits at the branch base while her kids move their mouthparts into the holes to feed. 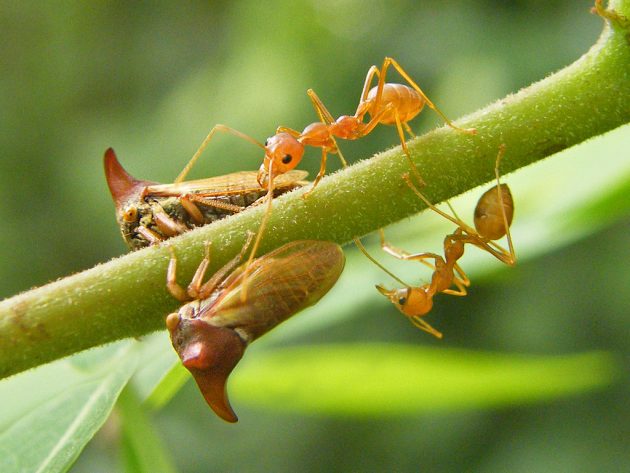 A pair of treehoppers in Thailand are attended by a pair of ants. Well developed mutualistic relationships exist between some treehopper species and ants. Ants provide protection from predators. (Flickr photo by Ian Jacobs)

Treehoppers communicate using vibrations. They sort of shake their body and each species has a different vibration pattern that goes through the branch and transmits as far as a meter. This is how they communicate with other members of the same species or even ants. This is how a mother communicates with her kids, and kids communicate with the mother. If just one youngster shakes, the mother doesn’t investigate. But if enough of them shake and it turns into a wave of shaking from an aggregation of nymphs, it’s like they are yelling “Hey! There’s a predator around!” The mother will go and see what it is.

Because many treehopper mothers provide protection for their young, both adults and immatures can frequently be collected together. Adults and immatures look quite different. Long ago I got to thinking that most treehopper collections probably have adult specimens but not the immature stages of known species. I discovered this was exactly the case. Today, one of my big projects is collecting and describing immatures of the New World treehopper genera and adding them to the Smithsonian’s collection. 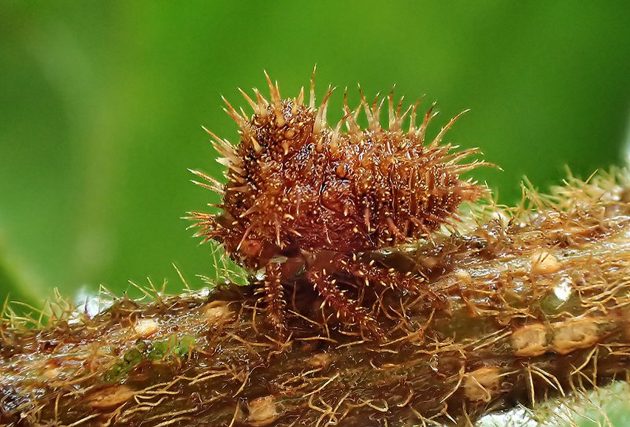 A spine-covered treehopper of the genera Aspona sp. Stuart McKamey is presently working on the description and naming of this species. (Photo courtesy of Kenji Nishida)

Q: When preparing treehoppers for the Smithsonian’s insect collection, where do you stick the pin?

McKamey:  In all insects, you try and go a little bit to the right side of the thorax, because you don’t want to mess up the head and you want a full half that is still examinable for all features. Also, there are a lot of muscles in the thorax so it grips the pin better when the insect dries. Small specimens are glued to little paper points that are pinned. 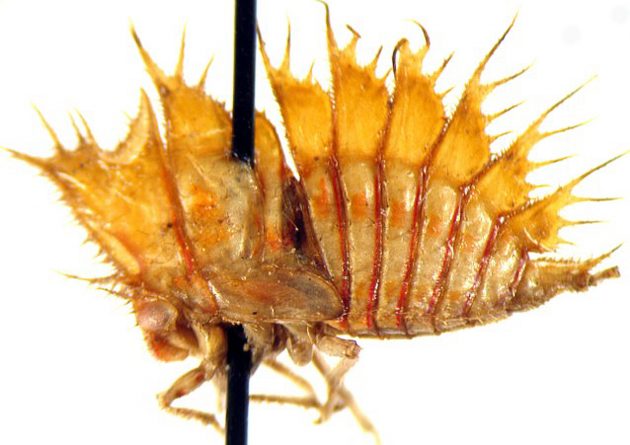