Remember the scene in Moonraker where Robert Kiel, as the steel-toothed character Jaws, bites through a tram cable that sends Roger Moore’s James Bond sprawling?

A Smithsonian researcher has discovered a 46-million-year-old fossil beetle that might recognize a fond kinship with Kiel’s character: it had zinc-lined mandibles, the oldest yet found to incorporate the hardening metal into its biting mouth parts.

Scientists have known for several decades that many insects, including some roaches, grasshoppers, stick insects, wasps, bees, ants and the larvae of several butterflies and moths, have amped-up anatomy thanks to the inclusion of zinc particles in their mandibles. But it’s still not known how they evolved the trait, or when it evolved. 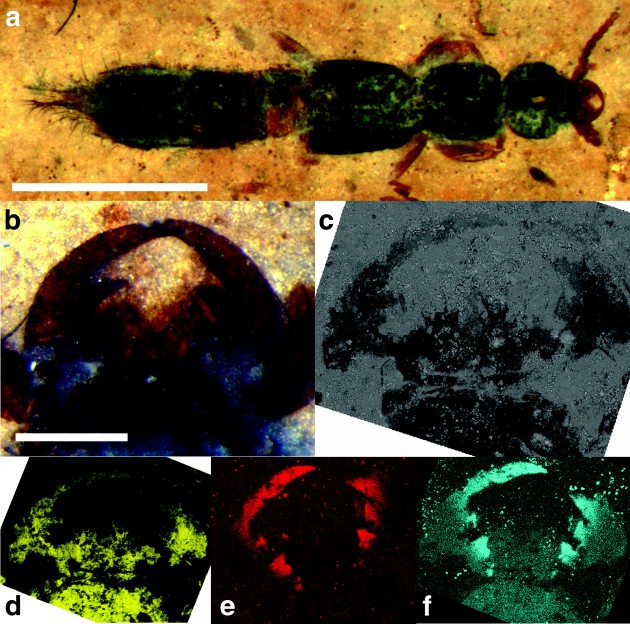 Localization of zinc in the mandibles of a fossil rove beetle (Coleoptera: Staphylinidae: Paederinae), USNM 595153, from the Middle Eocene Kishenehn Formation, Montana, USA. (a) Light micrograph of entire specimen, in dorsal aspect; scale bar = 2.0 mm. (b) Light micrograph and close-up view of mandibles; scale bar = 0.2 mm. (c) Scanning electron micrograph of mandibles, at approximately the same magnification as b. (d–f) X-ray images of mandibles, at lower magnification than b and c, showing localization of (d) carbon, (e) zinc, and (f) sulfur.

The new discovery by Smithsonian National Museum of Natural History researchers Dale Greenwalt and Tim Rose now shows that it’s been around for at least 46 million years, in the fossil of a beetle whose modern relatives hadn’t been thought to need reinforcement. It is the first time this feature has been documented in a fossil.

Greenwalt found the fossil beetle in rocks he collected from the Kishenehn geological formation, exposed along the banks of the Flathead River on the western border of Glacier National Park in Montana. A type of rove beetle (Coleoptera: Staphylinidae), one of the largest families of modern beetles that dine on invertebrates and decaying plant matter on forest floors around the world, Greenwalt’s fossil still contained some organic matter from when it died many millions of years ago. This exceptional preservation allowed Greenwalt to identify the presence of zinc in the beetle’s jaws.

“The incorporation of metals into insect jaws has been known for years, but it really hasn’t been studied in great detail,” Greenwalt said. “For some reason, people never looked at rove beetles. We just happened to have some fossil rove beetles that were beautifully preserved.”

Making the researchers’ task a bit more problematic was the fact that the beetles were covered in a fine layer of silicate, which not only visually obscures the fossils unless they’re wetted, but also bind tightly to the organic components of the fossil itself. To expose the beetle for examination for molecular and elemental analysis with a scanning electron microscope, Greenwalt used a surprising method to remove the stubborn silicate: a Faber-Castell pencil eraser.

“It’s really high tech, I’m afraid,” Greenwalt said. “But working with a fossil that’s only a couple of millimeters long, if you make a mistake, you can erase the entire fossil. So we’re very hesitant to clean these fossils unless it’s absolutely necessary.”

Because molecular analysis requires direct exposure to the substance in question, Greenwalt painstakingly removed the silicate layer. After sharpening the eraser to a very fine point microns in width, it only took Greenwalt a few minutes to expose a small section of one fossil beetle’s mandibles. Further examination revealed that the tips and molar sections of the beetle’s jaws were 13 percent zinc by weight, with sulfur and carbon also present.

Greenwalt suggested that because this beetle had reinforced mandibles from this early an age, the trait might be more widespread in modern insects than previously believed.

“There’s this old adage in paleobiology that the absence of evidence is not evidence of absence, so just because we can’t see the zinc doesn’t mean it’s not there,” he said. “It’s another example of how we shouldn’t underestimate what might be in the fossil record. There might be other things there, and either we just haven’t been looking for it, or we don’t have the instrumentation that will allow us to look.” 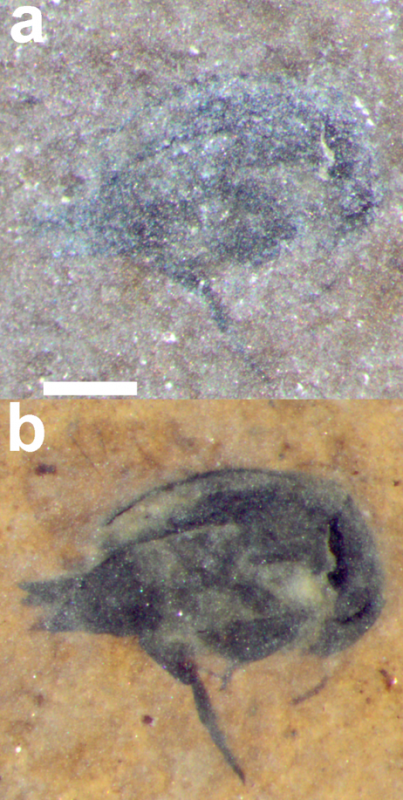 Photographs of a fossil tumbling flower beetle (Coleoptera: Mordellidae), from the Middle Eocene Kishenehn Formation, Montana, USA. Many insect fossils from this deposit are obscured by a thin layer of well-consolidated potassium aluminum silicate that renders the underlying fossils barely visible (a) when dry, but they become more readily visible (b) after immersion in 95% ethanol. Images at same magnification; scale bar = 0.5 mm.

Many fossils in the Kishenehn formation have proven to contain original organic material, including a blood-engorged mosquito with iron and porphyrin molecules Greenwalt helped examine several years ago. He added there is evidence to suggest that it may be thanks to primordial microbial mats, or cushions of algae-like scum similar to what grows in stagnant water.

Good examples of larger insects aren’t as common, but a great number of smaller-bodied insects do exist—insects that would have had trouble escaping from the sticky goo. One idea for why they’re so well preserved is that they were essentially mummified: insects fell into the mats, became enmeshed in the anaerobic muck, which eventually sank to the bottom of the lake or pond and became covered with sediment. Thus protected, their bodies transformed much more slowly into rock, and original organic components still remain.

Bronwen Cribb, a University of Queensland researcher who studies how insects incorporate metals into their various body parts, said Greenwalt’s findings contribute positively to the discipline.

“Insects span a long occurrence in the fossil record, appearing much the same as they do today,” Cribb said. “It is novel to have looked at the elemental composition of the mandibles in a fossil beetle. Tracking back this association of metals with cutting blades for insects may help determine the evolution of ‘metal-hardening’ of tools and its possible radiation throughout groups.”

Greenwalt and Rose’s findings appeared in the Canadian Journal of Earth Sciences. Stylianos Chatzimanolis of the University of Tennessee Chattanooga also contributed to the study.