Armed with a putty knife honed razor-sharp on its front edge, Greenwalt probes the cliffs along Flathead River in Northwest Montana, gingerly cracking open and separating paper-thin layers of oil shale from what geologists call the Kishenehn Formation. Once exposed, the shale has given-up a wealth of tiny fossils—exquisitely preserved midges, wasps, caddisflies, aphids, beetles, mosquitoes, water boatmen and other species of ancient insects. Not only are wing veins, hairs, antennae and other minute details visible in the fossils under magnification, but in many cases insect color patterns and pigments also have been preserved. 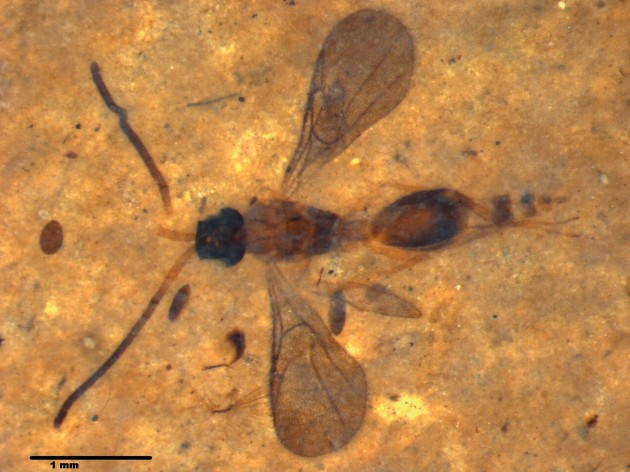 An exceptionally preserved wasp from the family Diapriidae found along Montana’s Flathead River.

To find these prehistoric gems Greenwalt, a volunteer paleobiologist at the Smithsonian’s National Museum of Natural History, first breaks off a shale chunk from a riverside cliff and carries it down to the water. Dissecting a chunk thin layer by thin layer, he dunks each fragment into the river then examines it with a hand lens. “You can stare and stare and stare and not see anything until the shale is immersed in water,” Greenwalt explains. When wet, the fossils—most only 2 to 3 millimeters in size—“jump out at you.”

In truth, the jumping days of Greenwalt’s insect finds ended some 46-million years ago during the Middle Eocene, back when Montana had a warm subtropical climate similar to today’s Florida. Although every insect he finds is extinct, many of these prehistoric creatures look remarkably similar to their modern-day descendants. Greenwalt recently published a paper describing a mosquito fossil found along the Flathead River that was nearly identical to modern-day mosquitoes. The discovery made headlines around the world because the mosquito died with a stomach full of blood and Greenwalt and colleagues found iron and porphyrin molecules from its final blood meal preserved intact inside the fossil. 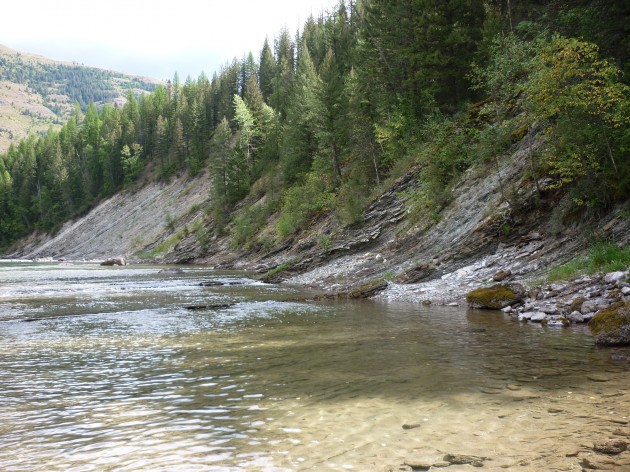 Katydid wing
Today, Greenwalt is excited by another Flathead River find:  the exquisitely detailed fossil of the left forewing of a male katydid. The wing is so well preserved that the pars stridens—the tiny toothed apparatus or file the katydid used to create its chirp—is clearly visible. “There are only four known fossils in the world of a katydid wing with the pars stridens preserved,” Greenwalt says. “What is interesting is that you can measure the length of the file, the distance between the ridges and their heights, and try and recreate the sound that the insect made.”

Based on the pattern of veins in the fossil wing Greenwalt and his colleague Jess Rust were able to name the katydid as a new species, Pseudotettigonia Leona. “The wing is a little bit different from that of a modern katydid wing in that it is shorter and fatter,” Greenwalt explains. 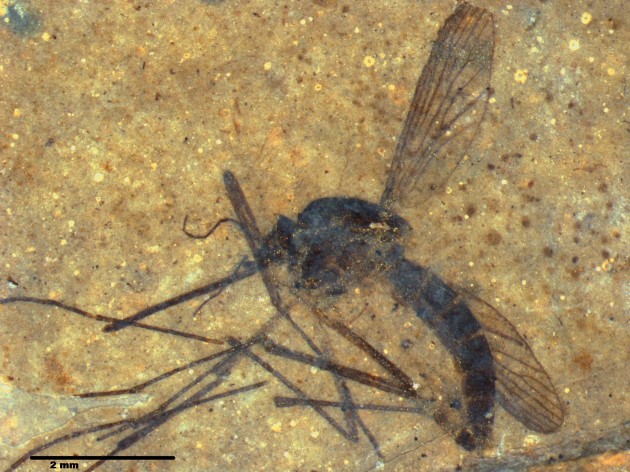 Fossil of the newly described mosquito species Culisteta kishenehn from the Kishenehn Formation in Montana. Tiny crystals of pyrite can be seen in the head, thorax and legs. About 2 mm long. (Photo courtesy Dale Greenwalt)

Scientists who study living katydids, dragonflies and butterflies don’t need to use wing venation to differentiate between species because the rest of the insect is readily available. For paleontologists a wing is often the only part of a large insect’s morphology available for to study, Greenwalt says. “So the paleontologist is forced to classify many  insects on wing structure and venation.”

And it is only very rarely that large insect wings, such as the katydid’s, turn up in shale oil fossils. They are flat and thin and are easily covered up by sediments. Never, in the Kishenehn shale, has Greenwalt found the complete fossil of a large insect.

Algae
Large insects cannot be covered quickly enough by sediments before they are eaten by a bird, fish or another insect, or they are destroyed by water currents or bacteria, Greenwalt says. “To me one of the most interesting aspects of this whole project is not the fossils themselves but the process that led to their preservation and fossilization. The question is how did so many tiny and fragile insects become so well preserved?”“I’ve collected nearly 6,000 pieces of shale containing over 16,000 fossil insects and there’s only one dragonfly, which is represented by just one wing, Greenwalt points out. “There is definitely a bias toward small insects in these fossils. The insects we are finding are obviously from shallow water, from the shore or maybe swamps or stagnant water adjacent to or part of a large freshwater lake.”

“What we think happened,” Greenwalt continues, “is that in spring as the waters warm up, algae began to grow. The surface of the algae is sticky, so it traps the insects. Next, the alga grows up over and envelops the insect. In this way it protects it from predation and bacterial degradation. Then as the mat of algae matures it sinks to the bottom where it continues to protect the insect from decomposition.” In winter the insect is covered by a layer of sand and eventually is compressed into a fossil. 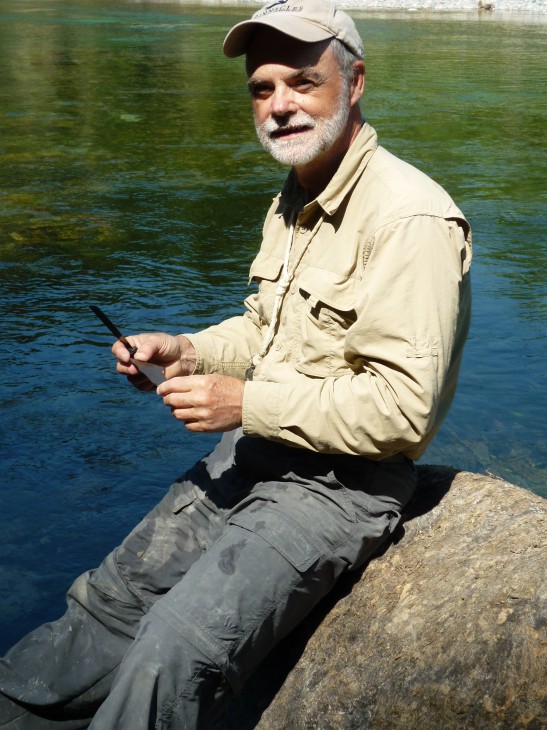 Dale Greenwalt on the Flathead River.

Greenwalt plans to try and recreate this process in a petri dish sometime soon, he says. “We’ll grow the algae, put the insect on it, and do a time-lapse video of the algae growing up and enveloping it.”

Until then he’s got a growing collection of exquisite fossil insects to study that he’s brought back from the Flathead River and placed in a series of drawers in the Natural History Museum’s Department of Paleobiology. This summer he’ll be back in Montana prospecting fossils with the help of interns from Montana State University.

“In my opinion the fossils of the Flathead River oil shale are an incredible resource,” he says. “They are arguably the best preserved insect fossils in the world.”