“Crematogaster aurora,” queen. This specimen is the oldest known species in its genus.

She was a stunning brown queen; drowned some 46 million years ago in a shallow lake in Montana. Her remains, recently recovered along the Flathead River, consist of a shadowy silhouette pressed upon a piece of reddish brown shale. Named Crematogaster aurora, this winged female ant is the only known member of her species. Her discovery is raising eyebrows among scientists who study ants.

“Molecular data from living ants suggested that the genus Crematogaster had evolved more recently,” explains Dale Greenwalt, a paleontologist at the Smithsonian’s National Museum of Natural History. “Now, this 46-million-year-old specimen is requiring scientists to completely rethink when this genus and its related forms appeared. It is obvious it has been around much longer than previously calculated.”

Crematogaster aurora is one of 12 new prehistoric ant species discovered in Kishenehn Formation shale in northwestern Montana by Greenwalt. They are newly described and named in a paper in the journal Sociobiology by Greenwalt and ant expert J.S. LaPolla of Towson University in Maryland. All 12 represent species new to science, known only from the locality in Montana. All are long extinct yet some represent genera that still exist.

Not only are wing veins, hairs, antennae and other minute details visible in the fossils under magnification, but in many cases insect color patterns and pigments also have been preserved.

(This slideshow reveals a series of newly discovered prehistoric ant species that lived some 46 million years ago during the middle Eocene. All were discovered in Kishenehn shale deposits along the middle fork of Montana’s Flathead River by Smithsonian paleontologist Dale Greenwalt. Click this link to learn more about how Greenwalt discovers these fossil insects.)

These Kishenehn fossils are from the middle Eocene (46 million years ago), a period of great interest for understanding the “evolution of ants and in particular, their march to terrestrial dominance,” the researchers say. It was during the Eocene that many of today’s ecologically dominant and species rich ant families emerged.

Factors that led to this diversification included the evolution and appearance of many new species of flowering plants, as well as high temperatures—in the early Eocene it was as much as 15 degrees Celsius warmer worldwide than it is today. “A lot of people also think the meteorite that caused the disappearance of the dinosaurs and ended the Cretaceous kind of reset the table for a lot of new things to evolve and diversify,” Greenwalt adds. “This maybe what happened with the ants.” 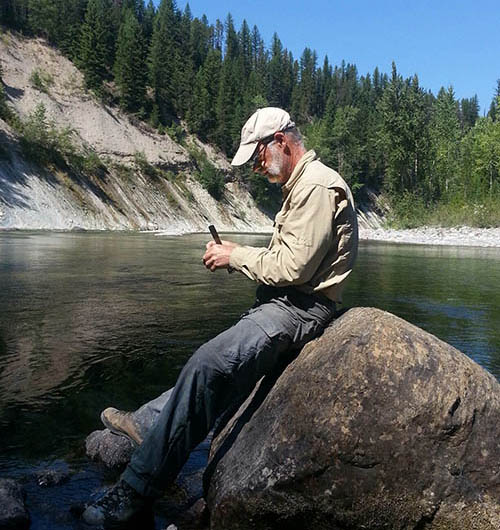 While LaPolla and Greenwalt name 12 new fossil species in their paper, the specimens are from a much larger pool of 249 ant fossils examined for the study. The majority of the ants discovered are alates, “which are simply winged forms of the ants,” Greenwalt says. “Workers and soldiers don’t have wings and pretty much stayed on land.”

By comparing Kishenehn ant species and genera with other North American Eocene fossil deposits such as the Green River Deposit along the Green River in Colorado, Wyoming, and Utah (48 million years old) and the Florissant Formation in Colorado (34 million years old) scientists can gradually piece together the abundance and distribution of North American ants during this period.