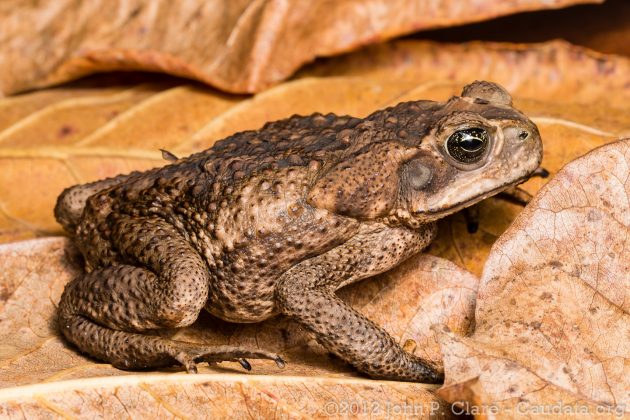 Fat, toxic and nocturnal, cane toads (Rhinella marina) are abundant today in Hawaii, even though they are South American natives. Released on the Hawaiian Islands in the 1930s to combat sugar cane insect pests, these hefty hoppers will “eat anything that moves and is small enough to fit in their mouths,” says Crystal Kelehear, a parasitologist at the Smithsonian’s Tropical Research Institute in Panama. Having never focused their eating on only the insects that plague sugar cane, their introduction to Hawaii (and elsewhere) was no success for cane farmers.

Still, cane toads are living large in Hawaii, especially enjoying its golf courses, where artificial ponds and sprinklers provide water and a breeding habitat, the short grass is easy to navigate and artificial lighting pulls in an endless buffet of nighttime insects.

Now, Kelehear and colleagues have discovered that after an 80-year separation, Hawaii’s wild cane toads have been playing host to an old acquaintance from way back home. 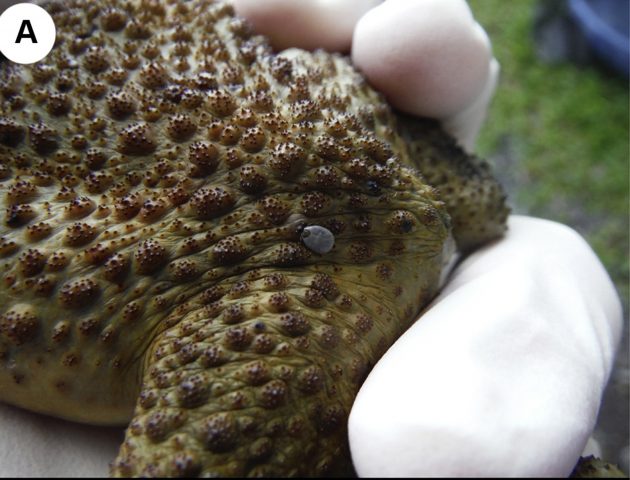 An “A. rotundatum” tick nymph clinging to the skin of a cane toad collected on the island of Hawaii. (Image published in the article: “First report of exotic ticks (Amblyomma rotundatum) parasitizing invasive cane toads (Rhinella marina) on the Island of Hawai‘i,” in the journal Ticks and Tick Borne Diseases.)

For the first time ever, Amblyomma rotundatum, an exotic tick that prefers cane toad blood, has been found clinging to wild cane toads in Hawaii. “This tick usually infests the toad in its native range, so it is an interesting case of an old foe catching up with a toad that long ago had left its enemy behind,” Kelehear says. “I can’t stress enough how interesting I find this.”

Somehow the tick found its way some 4,000+ miles across half the Pacific to reunite with its favorite host, the scientists reveal in a new paper in the journal Ticks and Tick-Borne Diseases. Amblyomma rotundatum is unusual in that it prefers the blood of reptiles and amphibians—cane toads overwhelmingly.

“I’d estimate that less than 10 percent of the approximately 900 tick species worldwide feed to some degree on reptiles, and some of them are specialized species that use cold-blooded hosts exclusively,” observes entomologist James Mertins, co-author on the study from the USDA Animal and Plant Health Inspection Service, National Veterinary Services Laboratories, in Ames, Iowa. 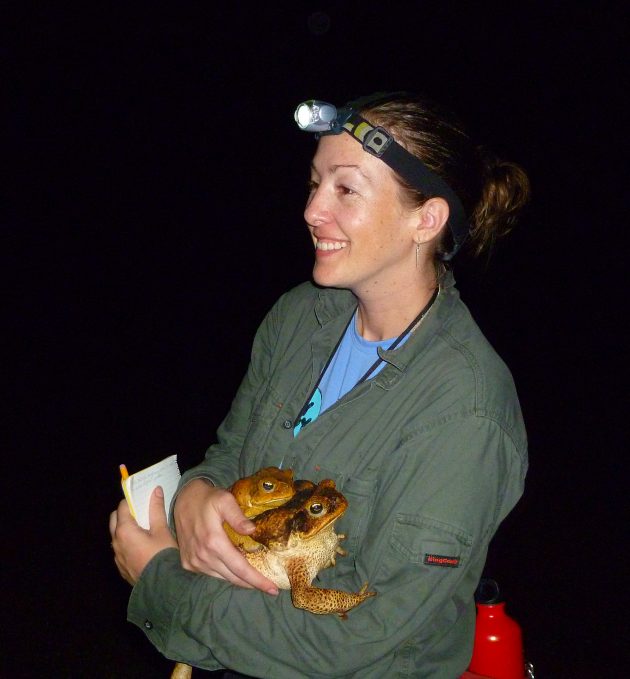 Crystal Kelehear collecting cane toads at night in Hawaii. Cane toads are nocturnal, so that’s the best time to collect them,” she says. “It is possible to find them during the day in areas where they are abundant–under plant pots, logs, outdoor freezers etc., anything that provides shelter and/or water–but it is a lot more labor intensive than just walking around with a head lamp at night and picking them up when they are out of hiding.” (Image courtesy Crystal Kelehear)

The researchers collected and examined 693 wild cane toads from the islands of Oahu, Maui and Hawaii and found A. rotundatum ticks on three toads from the island of Hawaii. Infested animals were all found near a small public zoo. The scientists suspect the ticks hitchhiked into Hawaii on captive tortoises or green iguanas imported from Texas by the zoo. They then transferred to and infested the wild toads living nearby.

Escaping detection was probably easy for the imported ticks, Mertins says. “Many of the hard ticks that exclusively feed on reptiles are relatively small, even as adults. Immature stages are even smaller and more difficult to spot. This allows them to hide mostly under the host’s scales; in its nares (nose), ear canals, or vent; or between its toes. Even on a reptile, the right-sized ticks can find adequate physical protection.”

Amblyomma rotundatum is one of only two hard tick species known to actively and commonly feed on amphibians, Mertins adds. “The unique chemical and physical properties of amphibian skin [cane toads are toxic] are hypothesized to be almost insurmountable barriers to attacks by most external parasites. Somehow, rotund toad ticks and iguana ticks were able to successfully and uniquely overcome these defenses.” 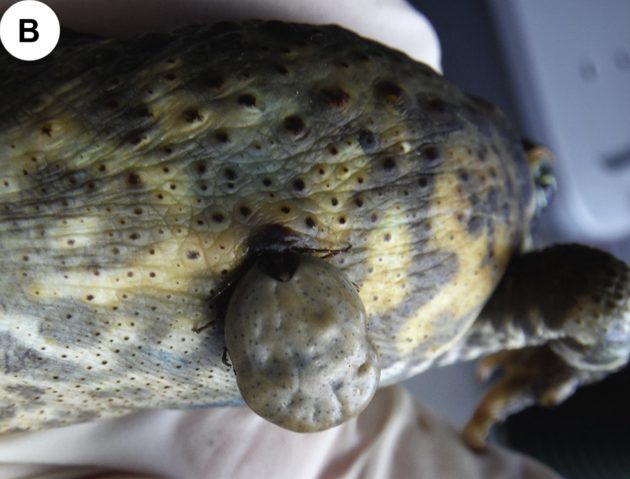 A greatly engorged female “A. rotundatum” tick on the side of a wild cane toad collected in Hawaii. (Image published in the article: “First report of exotic ticks (Amblyomma rotundatum) parasitizing invasive cane toads (Rhinella marina) on the Island of Hawai‘i,” in the journal Ticks and Tick Borne Diseases.)

“Ticks are known to have a negative impact on toad health in their native range,” Kelehear says, but the ticks seem not to have spread widely yet in Hawaii. An active control program could eliminate the ticks and prevent them from being established.”

While the ticks may do harm to the invasive toads, which might be a good thing, Mertins observes, “Hawaiian officials charged with protection of the ecology of the islands simply do not want to permit unintentional establishment of any new exotic species there because of unforeseen repercussions.” The USDA is working with the zoo to eradicate the ticks.

Interestingly, the paper reports, Hawaii now joins Florida as the only two U.S. states with established wild populations of A. rotundatum. In Florida, Mertins says, the ticks are found on cane toads, long established there, and Burmese pythons, a species recently established over a large area of South Florida, particularly in and around the Everglades.

Burmese pythons seem to be commonly used by all stages of the tick, wherever cane toads and pythons occur together, Mertins has observed, “but I suspect that, if given a two-way choice between a toad and a python, any self-respecting toad tick would prefer a toad blood meal.”