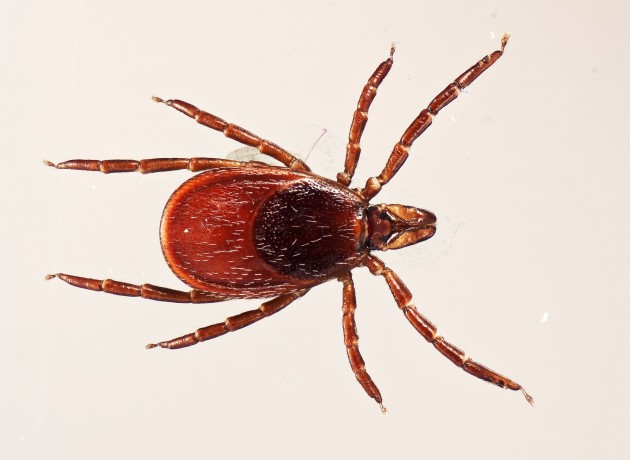 A female “Ixodes scapularis” also called deer tick or blacklegged tick, as seen from above.

Did you know that the blood-sucking parasite known as the tick is actually nearly 900 different species? Or that the tick is not an insect, but an arachnid?

Anything you might want to know about the scourge of dogs everywhere can be found at the U.S. National Tick Collection (USNTC). The USNTC is a part of the Smithsonian’s National Museum of Natural History and is housed at Georgia Southern University’s Institute for Coastal Plain Science in Statesboro, Ga. The USNTC is the largest continuously curated tick collection in the world, with 96 percent of the world’s recognized tick species and specimens from every continent.

Q: How long have ticks been on the planet?

Beati: This is a much debated issue. There are few fossil ticks, and they are relatively recent, appearing 100-to-90 million years ago. Morphologically, they are pretty identical to modern ticks, so there is little to learn from fossils. 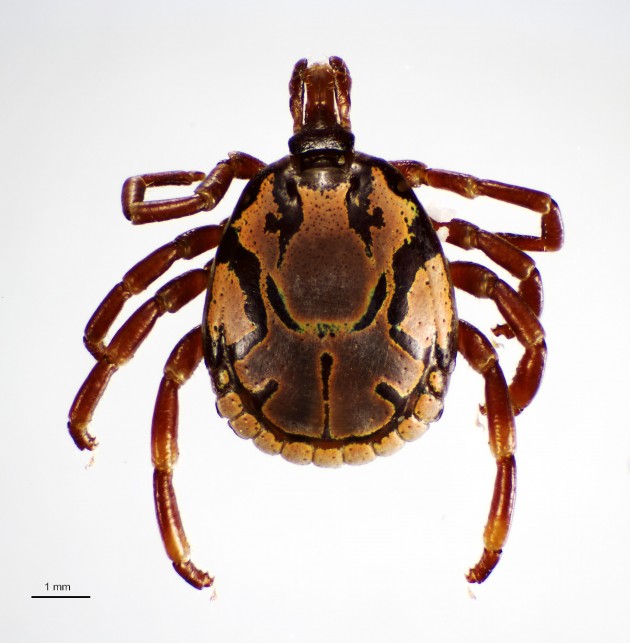 Q: Where do ticks live?

Beati: Ticks live on all continents: They parasitize reptiles, mammals, birds and even (rarely) amphibians. They are not associated with water environments, with the exception of one tick that is found on sea snakes. One species, Ixodes uriae, has an odd, disjunctive distribution (they are found in the arctic region and Antarctica) and feeds on sea birds. Ticks can be nidicolous (live in the nests and burrows of their hosts) or free in the environment.

Q: Why are ticks a source of vector-borne disease?

Beati: Ticks carry an enormous variety of pathogens, including bacteria (Rocky Mountain spotted fever and Lyme disease, for instance), viruses (Crimean-Congo hemorrhagic fever, to cite the most deadly), protozoa and even nematodes.

The many different pathogens that use ticks as vectors puzzled everybody until it was discovered that ticks locally immunosuppress their hosts near the bite site. To be able to feed for an extended amount of time (sometimes more than 10 days) without being detected or dislodged, ticks have to outwit the host immune response. They immunosuppress their host by injecting salivary gland products at the bite site that decrease the local cellular and humoral immune response. 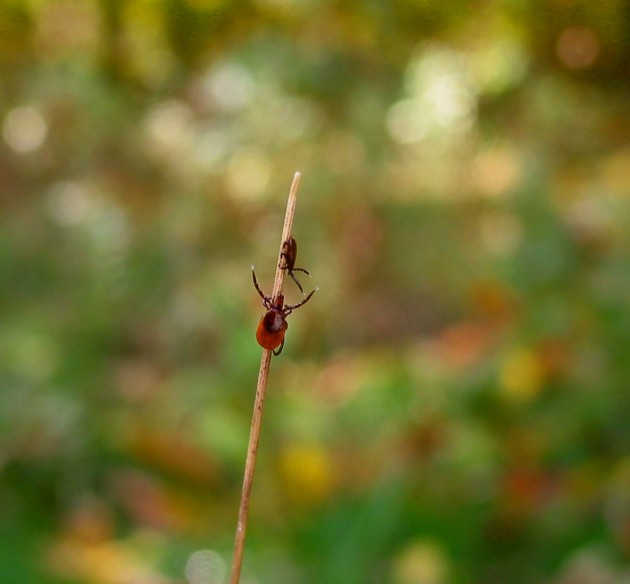 Deer ticks in a questing pose on a stem, waiting patiently for a warm host to walk by.

Ticks also inoculate anti-histaminics, analgesics and anti-coagulants into their hosts. By immunosuppressing the bite site they become a perfect syringe for pathogens. The pathogens can proliferate rapidly at the bite site and can then spread more effectively to the rest of the body of the host. For a pathogen, the choice of a tick as vector is a very smart evolutionary move.

Q: How do ticks find their hosts?

Beati: Ticks have developed different host-seeking strategies. Some ticks, like the Lyme disease vector I. scapularis, lay in wait for their hosts in vegetation in a position known as “questing.” Others like Hyalomma run after hosts, and some, like many soft tick species, simply share the same dwellings with their hosts.

All ticks have an organ that is used to detect odorants produced by their hosts, heat, and other chemical stimuli. When a host is detected, ticks questing on the vegetation will outstretch their front legs and ready themselves to grasp at anything that walks by. Ticks do not jump or fly and, therefore, a host has to brush against the tick for a questing tick to be able to climb on it.
Some ticks use eyesight to detect hosts.

Q: Do ticks thrive more in hot or cold weather?

Beati: Different ticks have developed different survival strategies that make them more or less susceptible to weather conditions. Some thrive in the desert where they chase their host by running on hot sand; others require heavily forested humid environments and quest passively on vegetation waiting for a host to go by. 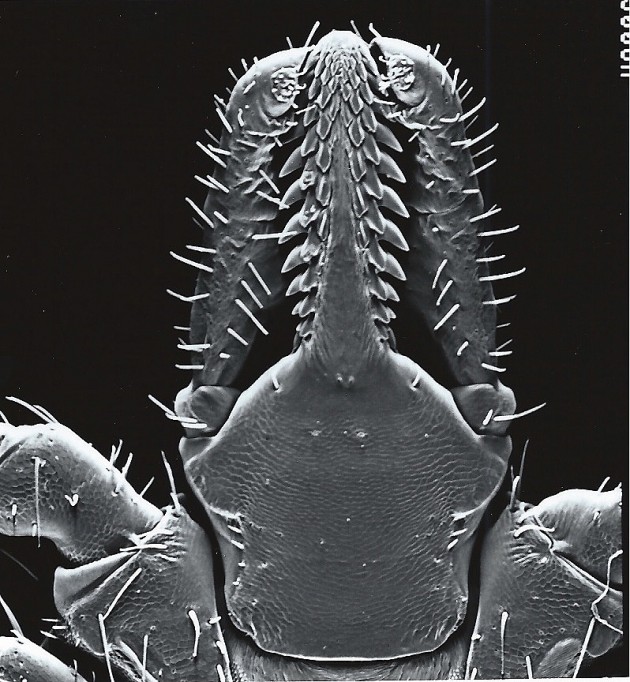 This close-up image shows the feeding mouthparts of “Ixodes scapularis,” the deer tick or blacklegged tick.

Ticks can live in bird nests in Antarctica or in bat caves in South America where humans can barely breathe.

Q: Why are ticks resistant to cold?

Beati: They have anti-freeze proteins. Ticks also enter diapause, a phase in which they basically shut down their metabolism until conditions are again favorable for questing and becoming active.

Is climate change increasing the prevalence of ticks?

Climatic change will likely cause the displacement of ticks from some areas to others. For instance, the tick I. ricinus in Europe is now reaching higher elevations in the Alps than it did 30–40 years ago. I expect the effect of climate change on ticks will be different depending on the tick species. In some areas ticks will disappear (ticks that like humidity will not do well in hot/arid conditions) and in others they will increase.

Q: How is the U.S. National Tick Collection used in research?

Beati: The collection is used for morphological and molecular studies on tick taxonomy. Ticks identified by the curators for external scientists are also used in eco-epidemiological studies on tick-borne diseases, tick control studies, and ecological surveys. The curators collaborate with dozens of scientists all over the world and these collaborations generate a continuous flow of publications, online products, and educational contents.

Q: Is there anything positive to say about ticks?

Beati: Some of the molecules produced by tick salivary glands (anti-histaminics and anti-hemostatics) have been and are being investigated as possible alternative products in human medicine. An anti-freeze protein in ticks may actually have antibiotic properties. The sialome tick is very complex, and scientists are just starting to explore its possible use in human/veterinary medicine.

Q: Among the approximately 900 tick species found in the national collection, do you have a favorite?

Beati: No, because of the enormous variety of survival strategies developed in ticks, each is a fantastic story in itself.