For the first time in decades, researchers have found a new bird species in the United States. Based on a specimen collected in 1963 on Midway Atoll, Northwestern Hawaiian Islands, biologists have described a new species of seabird, Bryan’s shearwater (Puffinus bryani), according to differences in measurements and physical appearance compared to other species of shearwaters. Scientists at the Smithsonian Conservation Biology Institute analyzed the specimen’s DNA to confirm that it is an entirely new species.

“Usually we see a species split into two because we find that one of them has a very different DNA than the other, without other indicators,” said Rob Fleischer, head of SCBI’s Center for Conservation and Evolutionary Genetics. “It’s very unusual to discover a new species of bird these days and especially gratifying when DNA can confirm our original hypothesis that the animal is unique. This bird is unique, both genetically and in appearance, and represents a novel, albeit very rare, species.” 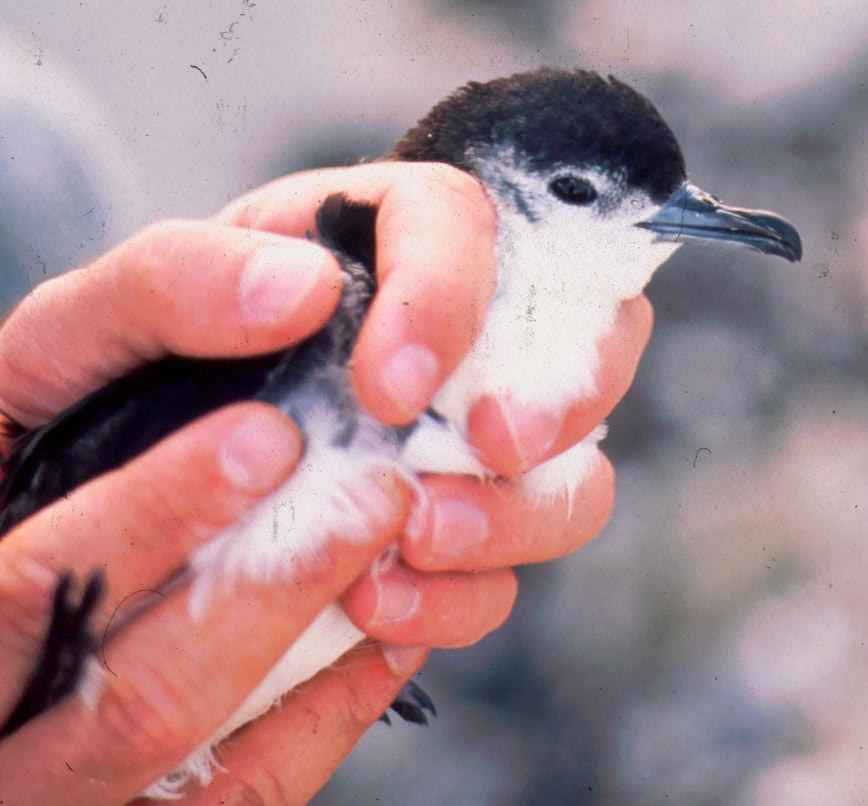 Researchers have rarely discovered new species of birds since most of the world’s 9,000-plus species (including about 21 other species of shearwaters) were described before 1900. The majority of new species described since the mid-1900s have been discovered in remote tropical rain and cloud forests, primarily in South America and southeastern Asia. The Bryan’s shearwater is the first new species reported from the United States and Hawaiian Islands since the Po’ouli was described from the forests of Maui in 1974.

The Bryan’s shearwater is the smallest shearwater known to exist. It is black and white with a black or blue-gray bill and blue legs. Biologists found the species in a burrow among a colony of petrels during the Pacific Ocean Biological Survey Program in 1963. Peter Pyle, an ornithologist at the Institute for Bird Populations, recently examined the specimen and found that it was too small to be a little shearwater (P. assimilis) and that it had a distinct appearance.

According to Fleischer and Andreanna Welch, a former graduate student and Smithsonian predoctoral fellow at SCBI who worked on the genetic analysis, the Bryan’s shearwater differs genetically to a greater degree than found between most other species of its genus, and is distantly related to another similar-looking species, the Boyd’s shearwater (P. boydi). Based on this DNA evidence, researchers estimate that the Bryan’s shearwater separated from other species of shearwaters perhaps more than 2 million years ago. These findings have been published in a paper, A new species of Shearwater (Puffinus) recorded from Midway Atoll, Northwestern Hawaiian Islands, in the current issue of The Condor.

Researchers do not know where Bryan’s shearwaters breed. According to Pyle, shearwaters and other seabirds often visit nesting burrows on remote islands only at night, and researchers have not discovered the breeding locations of many populations. Individual seabirds from colonies also often “prospect” for new breeding locations, usually far from existing colonies. Bryan’s shearwater could conceivably breed anywhere in the Pacific Ocean basin or even farther afield.

Given that Bryan’s shearwaters have remained undiscovered until now, they could be very rare and possibly even extinct.

“If we can find where this species breeds, we may have a chance to protect it and keep it from going extinct,” Welch said. “Genetic analysis allows us to investigate whether an animal represents an entirely different species, and that knowledge is important for setting conservation priorities and preventing extinction.”

Bryan’s shearwater is named after Edwin Horace Bryan Jr., who was curator of collections at the B.P. Bishop Museum in Honolulu from 1919 until 1968.