A remarkable first occurred recently at the Smithsonian’s National Museum of Natural History when ornithologists Carla Dove and Storrs Olson used 700- to 1,100-year-old feathers from a long extinct species of Hawaiian ibis to help determine the bird’s place in the ibis family tree. So fragile that some parts disintegrated as they were being mounted on microscope slides, the feathers are the only known plumage of any of the prehistorically extinct birds that once inhabited the Hawaiian Islands. 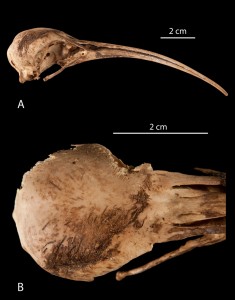 Discovered with a nearly complete skeleton, the feathers retained enough microscopic structure to allow the scientists to confirm the classification of the bird, known by its scientific name Apteribis sp, as a close relative of the American white ibis and scarlet ibis. DNA analysis confirmed this classification.

Remarkably, the feathers also retained enough pigmentation to allow Dove and Olson to determine the bird had been brown-black to ivory-beige/light brown in color. Before now, any reconstruction of the appearance of a prehistorically extinct Hawaiian bird had been only speculation. 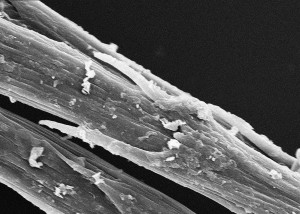 Apteribis sp. is one of only two species of ibises, both now extinct, known to be flightless. Its skeleton differs so much from its mainland ancestors that the bird’s relationship to other ibises could only be determined through the study of its feathers and DNA analysis, Olson says.

The find is highly unusual because “feathers do not preserve well and often decay before a bird is fossilized,” Dove says. “These weren’t fossil imprints in a rock, but feathers and bones we could actually pick up.”

Exceptional geologic circumstances led to the preservation of the feathers inside a lava cave on the Hawaiian Island of Lanai. The floor of the cave was partially covered in a deep layer of flaky gypsum crystals, which, for hundreds of years absorbed humidity in the cave and created an arid environment ideal for preservation of the feathers. The crystals were shaken off of the walls and ceiling of the lava tube by seismic tremors. 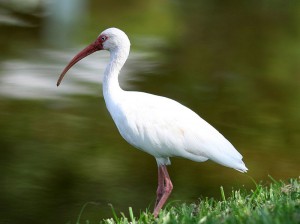 Image right: American white ibis (Photo by Terry Foote at en.wikipedia); below, scarlet ibis (Photo by Hans Hillewaert). Both of these birds are closely related to the extinct Apteribis sp., which did not fly.

From a taxonomic standpoint feathers are significant because the shape of microscopic barbs on specific areas of a feather have distinct features that taxonomists can use to determine what bird group it belongs to, Dove says.

“The barbs are unique only on the downy, fluffy part at the base of the feather, not at the tip,” Dove says. “These microstructures are similar among orders of birds—pigeons, ducks, songbirds, for example. 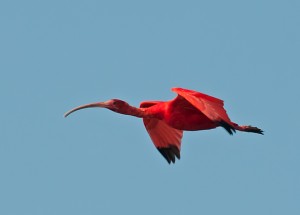 Using the extensive collections in the Division of Birds at the National Museum of Natural History, Dove compared the microscopic structures of the ancient feathers (which she describes as “short barbules with these long prongs,”) to those of modern day birds.

Her analysis confirmed that Apteribis sp. is most closely related the New World ibises of the genus Eudocimus, the American white ibis (Eudocimus albus) and scarlet ibis (Eudocimus buber). Apteribis sp. was first described from fossils found on the Hawaiian Islands of Molokai and Maui. It is one of dozens of bird species known to have gone extinct following the arrival of humans on the Hawaiian Islands.

“Fossil Feathers from the Hawaiian Flightless Ibis (Apteribis SP.): Plumage Coloration and Systematics of a Prehistorically Extinct Bird,” by Carla Dove and Storrs Olson appeared in the September 2011 issue of the Journal of Paleontology.