The black-headed paradise-flycatcher of western and central Africa is a small colorful forest bird that thrives on the flying insects it chases down by swooping, dipping and diving on the wing. Now a new discovery of two mite species found living in the flycatcher’s feathers opens a question between the birds and the bugs of just who caught who first?

Pipicobia terpsiphoni and Syringophiloidus furthi are two recently named quill mites that live inside the feather quills of the black-headed paradise-flycatcher. Mites are arachnids, tiny eight legged parasites related to spiders and ticks. Eliza Glowska, an acarologist (mite specialist) at Adam Mickiewicz University in Poland, discovered the new quill mites while studying the feathers of paradise-flycatchers at the Division of Birds in the Smithsonian’s National Museum of Natural History in Washington, D.C. The feathers were from specimens collected in Gabon, Africa by Smithsonian ornithologist Brian Schmidt that had been turned into study skeletons. “Whenever we make a skeleton from a bird we save as many of its feathers as we can,” Schmidt explains. “We then got a request from Eliza Glowska asking about feather mites. She visited and systematically went through all of our bags of feathers looking for quill mites.” 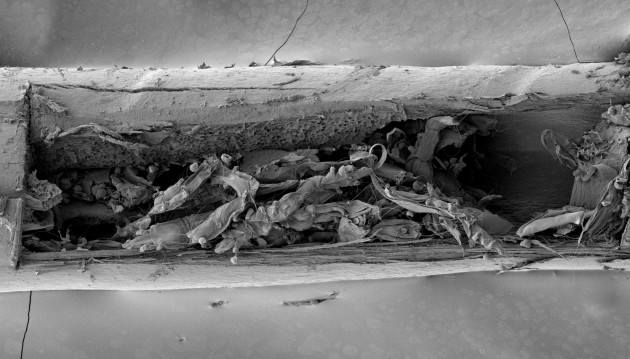 Although quill mite taxonomy is an area of intense research—320 species of quill mites have been discovered and described so far—knowledge of the life history and biology of these parasites is extremely limited, Glowska and Schmidt say. Nearly all of what is known about their behavior comes from a few studies done in the 1970s on the quill mites of the common house sparrow.

Remarkably, quill mites spend almost their entire lives enclosed inside the stiff, hollow central shaft or quill of a feather, a space called the lumen. “Other than the time when the female mites are dispersing, their entire life cycle is spent inside the quill,” Glowska says. Approximately two thirds of the known quill mite species are host specific, meaning one quill mite species lives only on a specific bird species. “There is evidence that some mites may be able to parasitize a narrow range of closely related hosts, namely birds from the same genus or family,” Glowska adds. “Different mite genera also are feather specific and only reside in one type of  feather in their host’s plumage—the primary feathers, secondary feathers, tail-feathers, body feathers, etc.” 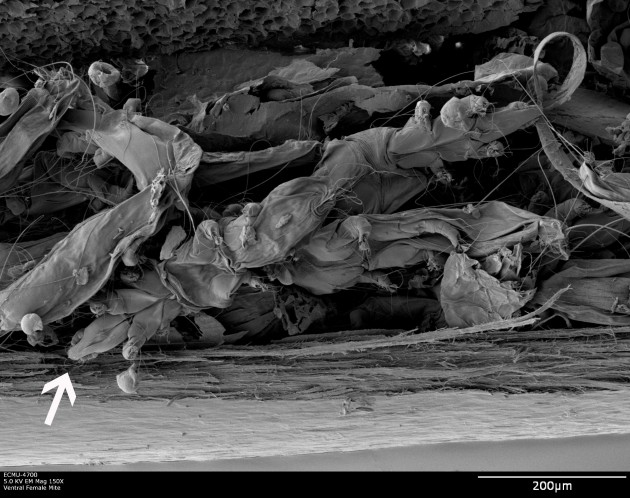 This scanning electron microscope image shows quill mites packed inside the lumen, or hollow area inside the quill of a bird’s feather. The arrow shows the location of a single mite’s mouthparts or chelicerae. An elongate, retractable structure used for piercing the quill wall (the fibrous structure at bottom of photo) and feeding on the liquid tissue of the bird protrudes from here. (Photo Gary Bauchan, Electron & Confocal Microscopy Unit USDA-ARS/courtesy Eliza Glowska)

To eat, quill mites move down the quill to where it is fixed into the bird’s skin. They pierce the quill wall at different heights with their dagger-like mouthparts (called chelicerae) and suck on the liquid tissue of their host. “We do not know exactly what they eat, presumably lymph,” Glowska adds. 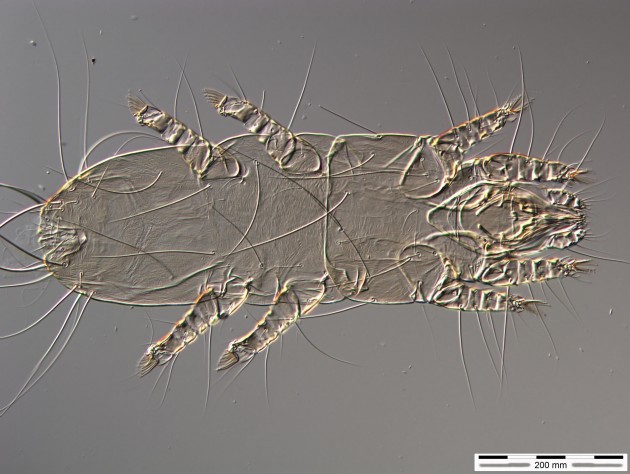 This microscope image is of the quill mite “Torotrogla merulae” which lives on the blackbird “Turdus merula” of Poland. Like all arachnids it has eight legs. (Photo courtesy Elisa Glowska)

The chelicerae has two parts—the cheliceral body and the movable digit which is elongate, retractable and used for piercing the quill wall and feeding, Glowska explains. The type of feather which a particular mite inhabits depends on the volume inside the quill and its wall thickness. An optimal feather is one that can house a relatively large number of mites yet has a wall that is not too thick to inhibit feeding.

Female mites are passed from bird to bird through direct contact in the nest during spring by the infested feathers of a mother bird to her nestlings, which then carry them for the rest of their lives, Schmidt says. A female mite enters the open area of a nestling’s developing feather quill and is sealed inside as the feather matures and the opening closes. She then begins to lay eggs. Some sparrow studies showed that on individual birds the small opening at the base of the feather—called the superior umbilicus—remains open, allowing the mites easy access to the quill interior throughout the bird’s life.

Mites are also on the move during a bird’s fall molt, Schmidt adds. They abandon the molting feathers which fall off the bird, and invade the newly developed feathers on the same host. Some birds, like pigeons, touch each other in a communal roost and it appears mites also can be passed along that way.

How many on a host?

How many mites can be found on one bird? “You never know,” Schmidt says. “There may be none or several thousand. If the birds are stressed out and weaker the mite load can get higher. Most birds probably have a few mites on them. Mites are something pigeon fanciers monitor very closely. If they bring in new birds they quarantine them first while they are treated for quill mites before they put them with the rest of the flock.”

“I’ve examined birds on which I’ve found just one infected feather, and others that had dozens of infected feathers,” Glowska adds. “As for the number of mites inhabiting one quill, the spectrum is broad, from just one specimen to several hundred, depending on the mite species and their phase of development.” As the black-headed paradise-flycatcher’s mites revealed, more than one species of mite are often found on a specific host.

For the most part quill mites are harmless, Schmidt says. If they are feeding on a growing feather as it is coming in they can impart damage to the feather. Usually mite feeding looks like little micro holes punched into the feathers. These holes provide a weak point on the feather so the feathers can start breaking off.

As for the question of just who caught who first, Glowska says that before they parasitized birds, quill mite ancestors may have once been found in the nests of dinosaurs. “It is hypothesized that the Syringophilid [quill mites] ancestors were predators living on other mites that lived on the wing vanes of birds. These micro-predators living in the nests of birds or even theropod dinosaurs, [some dinosaurs had feathers] evolved to become parasites in bird quills,” Glowska says. “It is believed that quill mites diverged from a closely related family [Cheyletidae] approximately 180–185 million years ago in the Early Jurassic. However, Archaeopteryx, considered to be the earliest bird, is known only from the Late Jurassic so, Syringophilids were probably already associated with the ancestors of birds–theropod dinosaurs. I hope our molecular studies will allow us to verify this hypothesis.” –John Barrat