A research team from the Smithsonian and Arizona State University have developed a new, non-destructive method using spectroscopic analysis to help unravel the complex chemistry of bird feather pigments.

Conventional methods of examining the pigments in bird plumage require destroying the feathers. This restricts the ability to study feathers from endangered species and in museum specimens. Now Raman spectroscopy has been enlisted as a nondestructive process to detect the spectral bands of light scattered by a feather and predict the most abundant type of carotenoid pigment in that feather. 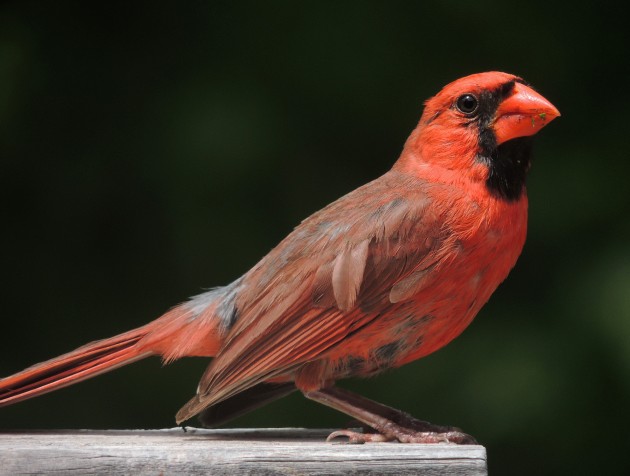 Northern cardinal. Most of the bright feathers that we see flying around us, like the red feathers of a cardinal, are colored with a mixture of carotenoid pigments. Birds extract carotenoids from food and deposit them directly into their feathers.

“Most of the bright feathers that we see flying around us, like the red feathers of a cardinal or the yellow feathers of a goldfinch, are colored with a mixture of carotenoid pigments,” explains Daniel Thomas, a fellow at the Smithsonian’s National Museum of Natural History and lead author of a recent paper in the scientific journal Analytical Methods.

Familiar examples include beta-carotene, which gives the orange color to carrots, and zeaxanthin, the yellow color of corn. Birds extract carotenoids from food and deposit them directly into their feathers, like the pink astaxanthin from brine shrimp that flamingos use to make their feathers pink.

“Birds also process dietary carotenoids through biochemical pathways that alter them into new, modified carotenoids having dramatically different colors,” Thomas explains. Cotingas, for example, is a group of South American birds that eat fruit containing a yellow carotenoid pigment that they modify into a new purple carotenoid displayed in their feathers.

“Any one feather can contain a complex mixture of carotenoids, with each type of carotenoid in that mixture having a dietary origin or a physiological origin,” Thomas adds. “This means carotenoid-pigmented feathers actually contain very interesting information about the habitat, physiology and evolutionary history of a bird.” 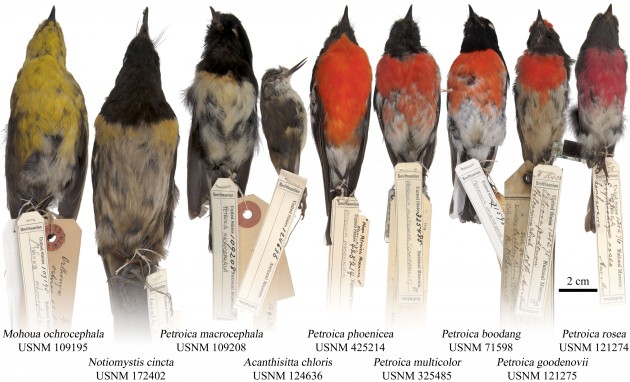 Some of the New Zealand and Australian bird specimens from the collection of the Smithsonian’s National Museum of Natural History that were used in the study.

The brilliant coloration of a carotenoid compound, which varies widely in bird feathers, is also responsible for producing a vivid Raman spectrum. To learn which specific molecules are in a feather the scientists shine a laser beam, an intense monochromatic light source, on a feather sample, then capture the inelastically scattered light that comes back, explains Odile Madden, a materials scientist at the Smithsonian Museum Conservation Institute and co-author of the paper. “When struck with a laser the bonds in the molecule of that sample vibrate, and in order to do that they will siphon specific quantities of energy from some of the photons in that laser.”

By measuring the difference in energy between the original laser light and the light scattered back after striking the sample, Raman spectroscopy reveals the most abundant molecules in a feather. “In many cases, bond vibrations of specific molecules have already been recorded,” Madden says. “So by matching our values to the previously recorded values we have a reasonable idea of what bond is being probed.”

The conventional method for extracting this information, a process called liquid chromatography, involved chemically draining the color out of a feather, and destroying it. Now, “using Raman spectroscopy and multivariate statistics, we can access this information without sample destruction, which gives us access to precious bird specimens that have never before had their feather pigments analyzed,” Thomas explains.

As part of their study the team tested this new method on specimens of the Petroica songbird from Oceana in the collections of the National Museum of Natural History. “These small songbirds are very brightly colored in Australia, with vivid red, orange or pink breast feathers,” Thomas explains. “In New Zealand however, the Petroica species have very muted colors, light yellow, gray or black.”

“When we studied the carotenoid pigments in the Australian birds with orange and red feathers, we discovered that they were likely making these pigments out of yellow pigments in their food. Some of the New Zealand species display these same yellow pigments, but no longer modify them to be orange or red. So, evidence from this new technique has informed us that the yellow to red or yellow to orange modification has probably been lost from the New Zealand species of Petroica.”

Why did New Zealand species of Petroica stop being red? “This is something we plan on looking into, but it almost certainly is because there was a cost associated with displaying red pigments,” Thomas says. “Whatever this cost is, the Australian species  is paying it today.”

In addition to Thomas and Madden, co-authors of this new study include ornithologist Helen James of the Smithsonian’s National Museum of Natural History and Kevin McGraw of Arizona State University.