In June, Odile Madden, materials scientist at the Smithsonian’s Museum Conservation Institute, was a participant on a 6-day interdisciplinary expedition to a number of beaches southwest of Seward, Alaska where she experienced first-hand the marine debris and plastic pollution in this remote region. (Places visited included the Kenai Peninsula, Afognak Island, Shuyak Island, and Katmai National Park.)  Expedition GYRE, as the trip was called, hosted an international group of artists, scientists and educators to observe, document and collect marine debris from Alaska’s beaches. 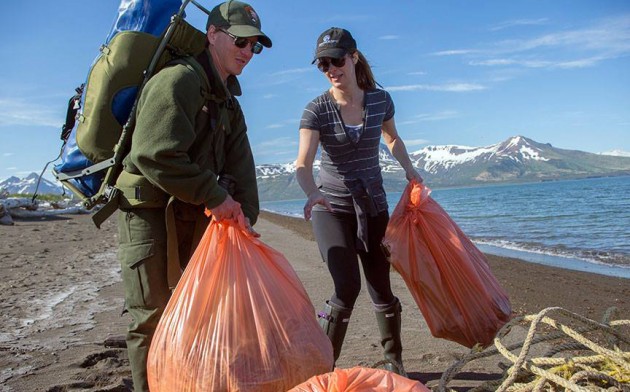 Here, Madden answers a few questions about her journey and what she experienced for Smithsonian Science.

Q: What was Expedition GYRE’s aim?

Madden: To bring together people from different disciplines to observe the plastic marine debris problem, discuss it, explore it together and raise the awareness and dialogue about plastic in the ocean. It was organized by the Anchorage Museum and the Alaska Sea Life Center and our work will culminate in an exhibition at the Anchorage Museum opening in February. It will be mainly an art exhibition peppered with science exploring plastic in the environment.  It will deal with issues such as entanglement, floating nets and fishing gear that entangle and drown marine animals; bite-sized floating pieces—made from polyethylene and polypropylene—that are chemically inert and don’t break down in a marine animals’ digestive systems, which can cause blockage and death; and toxicity, plastics that contain harmful compounds such as phthalates and heavy metals which can leach out into the environment and build up in the food chain.

Q. What was your part in the Expedition?

Madden: First of all, as a materials scientist who studies the long term stability of polymeric materials I was there looking at the problem from the point of view of the plastic. Normally most research in this area is done from the point of view of its impact. I took along a portable laser-based Raman spectrometer and an X-ray fluorescence spectrometer. The Raman spectrometer can reveal what polymers and additives a plastic is made from. The X-ray device can show us what elements are present.

When we talk about plastic pollution we attribute evil feelings, an evil character to it. But plastic is not evil, it is stuff that we make, we prioritize how to use it, we demand it. So the idea that plastic pollution is evil doesn’t lend itself to solutions. We need to begin to understand the plastics we use, to identify the material we are creating, decide what we don’t like about it and then work towards a solution. 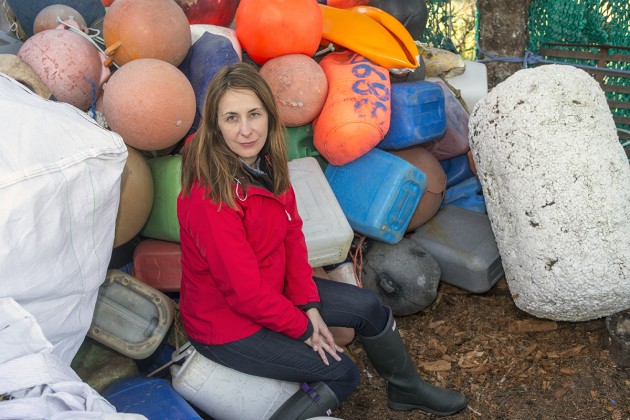 Odile Madden with a collection of plastic buoys, fishing floats and fuel containers found on the shore of Alaska’s Blue Fox Island. The big white object on the right is a Japanese styrofoam buoy. Huge numbers of these styrofoam buoys have washed up on Alaskan shores since the 2011 tsunami, Madden says. The styrofoam buoys break apart, first into large fragments, and then smaller and smaller into tiny individual balls. Animals peck at the fragments and can easily ingest them. Light weight and static prone, the styrofoam balls are very hard to clean up. (Photo (c) Kip Evans GYRE)

Q. Can you give an example?

Madden:  Yes. On your trip we found two abandonned plastic fishing floats, one was dark green the other light blue, but both performed the same function. The green one contained a small amount of lead and was made of polyethylene. The light blue one was made of polyvinylchloride, (PVC), and we found that its plastic was full of lead. This showed there is a better alternative, you don’t need the lead (a toxic heavy metal) or PVC (which tends to include potentially toxic additives) in a plastic float so why make them from these materials?

Q. You saw a lot of fishing nets and gear on your voyage?

Madden: Yes, we saw a lot of nets washed up on beaches that were huge, massive. Derelict fishing nets are a big problem in Alaska. Although a new net may cost tens of thousands of dollars they are often cut loose or abandoned by fishing ships to float in the ocean. Drifting, they continue catching and entangling animals, and not just fish. 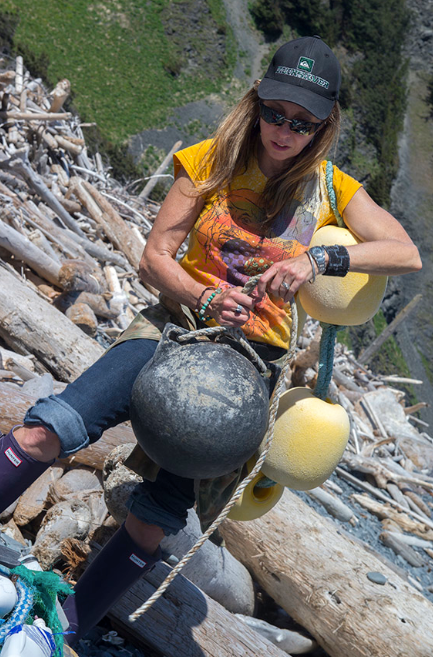 Once on the beach the nets get tangled in and wrapped around logs and other large pieces of flotsam and jetsam, so they are very difficult to extricate. Once extricated, however, they cannot be easily gotten rid of. Landfills won’t take them and they cost money to dispose of.

One GYRE team member, Dave Gaudet with the Alaska Marine Stewardship Foundation, is working to trace fishing nets and other fishing equipment back to their owners. It’s a tough job because this stuff is not coming from Alaska but from all over…  Asian, U.S. and other fishing operations thousands of miles out beyond the gulf. We began looking into getting chemical signatures from the nets using X-ray and Raman spectrometry and also using museum/art history provenance techniques, asking questions such as: What colors are the nets? What do their knots look like? How many fibers do the nets have and what diameter are the fibers? Gaudet had already been asking many of these questions himself, using a deductive reasoning process that I was interested to find was very similar to the processes I use in museum work.

Compiled together, all of this information may help trace these washed-up nets back to their owners and allow some kind of enforcement for abandoned nets.

Q. What other stuff was washed up?

Madden: Many other types of fishing gear, buoys, packaging, bottle caps, boxes of foam packaging, like the Styrofoam used to pack a television, and a lot of what I call unnecessary consumer items spilled from container ships. For example, we saw lots of those little red plastic flowers used on humming-bird feeders virtually everywhere. Also on every beach there were black fly-swatters with logos of American sports teams on them. During the trip we met several Alaskan residents who headed coastal cleanup projects and/or were artists. Each had a full bucket of the fly-swatters in their personal debris collection. They also had buckets of mini foam sport balls, fishing floats, etc. I brought home seven fly-swatters of my own.

These things really showed me that we [Americans] are the market for these plastics that are coming mostly from Asia. It got me thinking more now about the plastics I use. Do I really need them? How long am I really going to use items I buy? 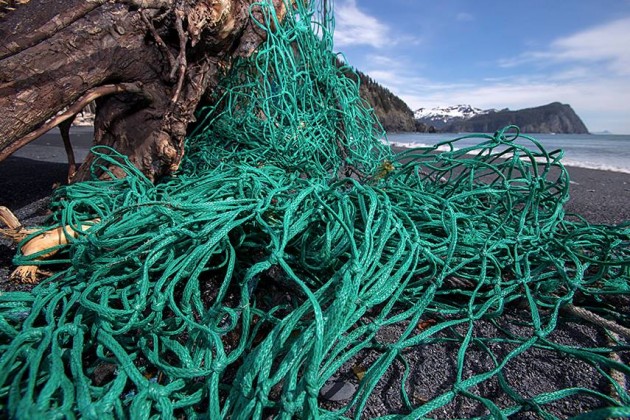 At Hallo Bay on Katmai National Park, we participated in a beach clean-up and eventually hauled four tons of plastic trash to our boat that had been collected by National Park Service rangers along a 9-kilometer stretch of beach the week before.

Q. Is recycling all this plastic a possibility?

Madden: Many plastics break down very slowly in the environment.  Eventually objects can break apart into tiny micro-plastic particles which are virtually impossible to filter out of the environment, so recycling micro-plastics is practically impossible. We talked a lot about recycling the larger items but it’s not so easy to recycle ocean plastic because we expect it must be made immediately into something else. And this stuff has long been out in the sun, in salty water and is covered in slime, marine organisms and dirt. So you’ve potentially got a material that is going to produce an inferior product. 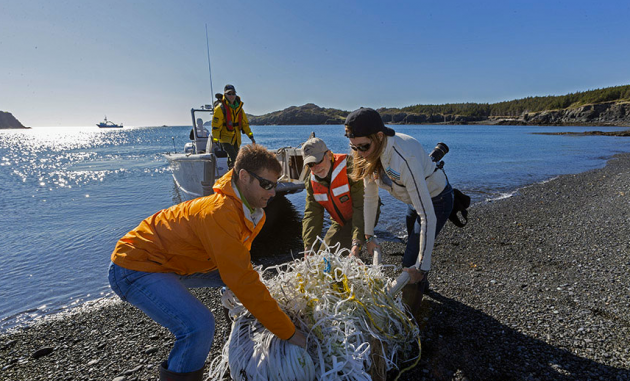 GYRE team members Nick Mallos, left, and Pam Longobardi, right, with Howard Ferren, GYRE expedition leader and the Director of Conservation at the Alaska Sea Life Center, heft away a bundle of packing straps that are terribly harmful and are often fatal to marine life. (Photo (c) Kip Evans GYRE)

One obvious solution is to stop this stuff from getting into the water initially, aggregating it, having a better system for aggregating it so that it can be reused at some point but not get into the ocean. I personally think that if we could accumulate it somewhere so it doesn’t have to be used right away, we’d then have that as a resource. Basic oversimplified economic theory would say that if you have a resource someone will come along and find a use for it.

For me visiting Alaska was a kind of “nature reset” because it is so vast and clean. Living near waterways like Sligo Creek or the Anacostia River that can be choked with plastic and a fair amount of other garbage, you begin to expect to see it and accept it. Getting back to Alaska where it is clean and vast you see that plastic is out of place. My first few days back it was more difficult to accept what I call the fouling of the urban environment.