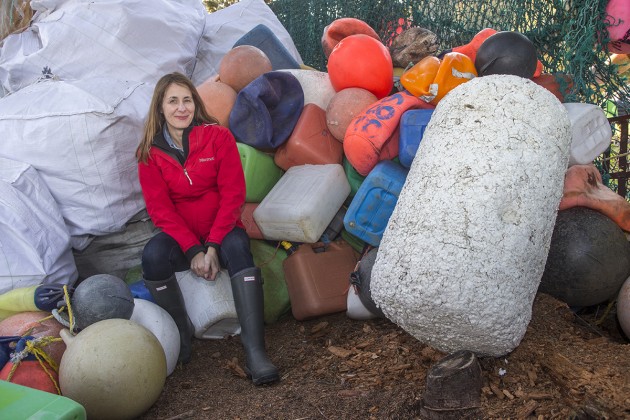 Odile Madden with a collection of plastic buoys, fishing floats and fuel containers found on the shore of Alaska’s Blue Fox Island in 2013. The big white object on the right is a Japanese Styrofoam buoy which will gradually break apart into smaller and smaller tiny individual balls. Animals peck at the fragments and easily ingest them. Lightweight and static prone, the Styrofoam balls are very hard to clean up. (Photo (c) Kip Evans GYRE)

Odile Madden knows a lot about plastic. A materials scientist with the Smithsonian Museum Conservation Institute, she has spent the past eight years studying plastics artifacts in the Smithsonian collections. Plastics are found in all the collections of the Smithsonian’s museums now, and the long-term stability of many of these artifacts is questionable and uncertain. Madden’s job is to study that instability in an attempt to extend the lifetimes of these objects.

In 2015, she embarked on a collaborative study with researchers at Western University in Ontario to examine microplastics that pollute two key waterways in the Great Lakes: Lake Ontario and its outlet to the Atlantic, the St. Lawrence River. The results of that study were published recently in the Marine Pollution Bulletin.

Madden spoke with Smithsonian Insider recently about their surprising findings and her position that plastics are not evil. 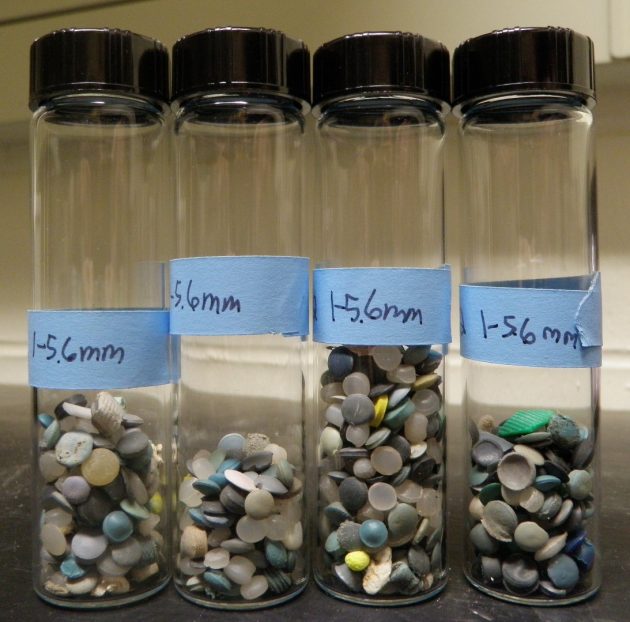 Q: What are microplastics?

Q: That brings to mind the popular belief that plastic doesn’t degrade.

Madden: [Laughs] It’s a funny popular conception that ‘Plastic lasts forever, it never goes away!’ In my job working with museum artifacts, I see that plastic does not last forever.

Q: What did you learn about microplastics in the Lake Ontario/St. Lawrence River study?

Q: Did that surprise you?

Madden: It did a bit. In 2013, I took a research trip to Alaska with other scientists and a group of artists. We were looking at very remote shores in Alaska and finding huge amounts of plastic on some of these shorelines. You’d find a spit of land off the Alaska coastline was collecting huge amount of plastic by merit of the currents and the way they flow around the Gulf of Alaska. It was interesting to see how water currents carried plastic a long way and how the plastic was deposited along the shoreline. But it wasn’t because a lot of people lived there. We hardly saw a soul in the six days we were out on the boat. In that case, the plastic is being carried to places far from the source.

In this Great Lakes environment, I was interested to see that the most densely populated areas seemed to have the most effect on where the plastic was found, rather than where the environment was carrying the plastic.

Maybe that has something to do with the fact that a lake is a more closed environment than the open ocean. I thought it was interesting. It also seemed to affect the kind of plastic that was found. 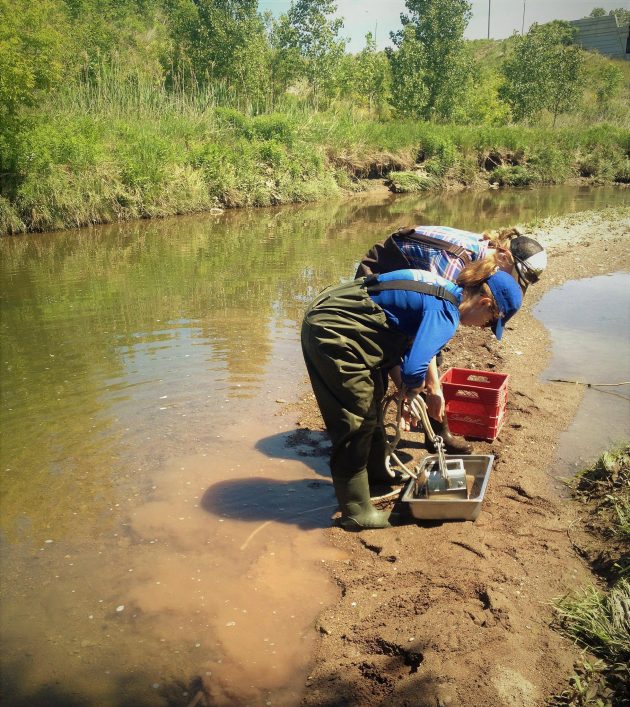 Research team members Anika Ballent, biologist at the Department of Earth Sciences of the University of Western Ontario, and Lisa Erdle, project biologist at Ontario Streams, sample submerged surface sediments for plastics in a creek that feeds into Lake Ontario. Ballent is principal author of the paper “Sources and sinks of microplastics in Canadian Lake Ontario nearshore, tributary and beach sediments,” published in Marine Pollution Bulletin.

Madden: In Alaska we found types of plastic that float, like polyethylene, polypropylene, and plastic foams. It had to be carried a long, long distance to land where it did.

In Lake Ontario, our team found plastics that float and plastics that don’t float. We identified polyethylene, polypropylene, polyvinyl chloride (PVC), polymethylmethacrylate (which we often call by the trade name Plexiglas), ABS, nylon, and others. There was a large proportion of polyethylene nurdles—the small plastic beads from which larger objects are molded.

One interesting find was a significant amount of polyurethane, which has become popular as a household and industrial glue and gap-filling foam, as well as a packing material.

It was also interesting that some of the plastics that would be expected to float were actually found in the cores, which means they were found in the sediments at the bottom of the water. How that floating plastic gets pulled and held down is an open question.

Q: You mentioned in a 2013 interview that people tend to think of plastic as evil, but you don’t—or at least, you didn’t at the time—find that viewpoint particularly productive? 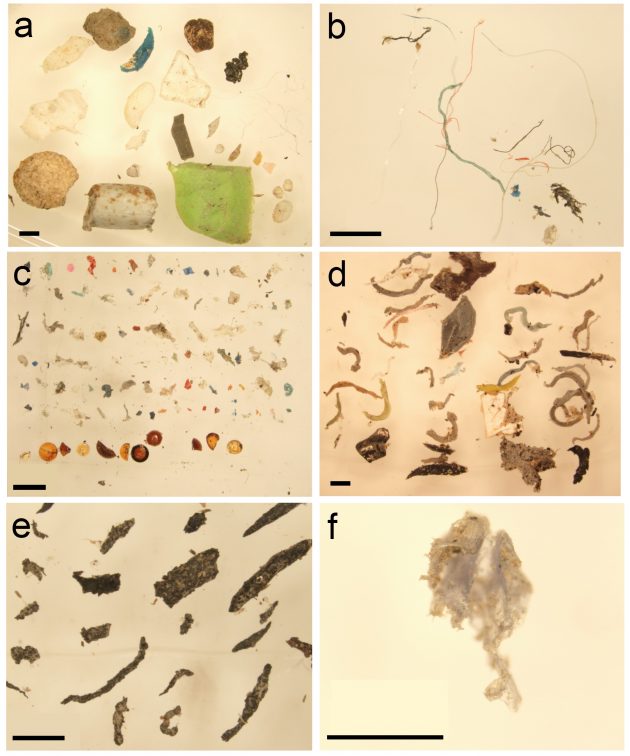 Examples of microplastics identified in sediment samples from tributaries, beaches and the nearshore lake bottom of Lake Ontario. (All scale bars are 1 millimeter) (a) Macro- and microplastic fragments, fibers, foams and pellet from the upper 10 centimeters of proximal foreshore sediments at Sunnyside Beach. (b.) Microplastic fragments and fibers from nearshore sediment in Toronto Harbour from a sediment trap. (c) Microplastics found in grab sediments in Humber Bay, including hexagonal glitter top row, and whole and fragmented PSS beads, bottom row, among other fragments of unidentified source. (d) Microplastics from Etobicoke Creek. Long helical fragments may be derived from deflashing processes used for finishing injection moulded plastic products. (e) Examples of black, opaque fragments with rubberlike consistency found in Humber Bay. (f) Microplastic fragment exhibiting bulbous to wispy form and isolated from Toronto Harbour 1–2 cm below the sediment surface.

Q: How you view plastics differently from the average person on the street?

Madden: As a materials scientist, I study plastic as a material, and I spend a lot of time studying the technology by which it is shaped into things. So I look at synthetic materials as substances made by people that are shaped into objects with a goal in mind. They have a motivation, a desire for something, and they have some amount of capability that they use to make the material into objects that they can use. That’s very much about choice. And materials are just stuff. Stuff is not evil.

When creating any new material, it is normal, probably inevitable, to discover some deficiencies along the way. Correcting those deficiencies is important if a type of material is going to be successful. This is as true for plastics as it is for metals, ceramics, paper, and so on.

Q: What do you see as a way forward from this world we live in with all this plastic?

Madden: Hmm. I believe that plastic will continue to sort itself out because it is a new material. When I look back at other materials through history and how they’ve evolved, I see examples where some have evolved into less unhealthy options.

Celluloid, a name for an early plastic called cellulose nitrate, is my favorite example of a kind of plastic that evolved from something very unsafe into something safer. One of its characteristics is that it is extremely flammable. It can combust without needing any air and even burn under water. It is very hard to put out a cellulose nitrate fire.

Celluloid was used for motion picture film around the turn of the 20th century and to make novelty items like combs, brush sets, shirt collars, all sorts of objects. It had this tendency to ignite quite spectacularly, and there were fires in factories and movie theaters that burned and killed many people. It was this huge glaring public safety hazard. But people weren’t willing to do without motion pictures or these personal items.

But over the course of 50 or 60 years the use of celluloid evolved. Traveling on public transport with motion picture film made of celluloid was forbidden. Projectionists in movie theaters became licensed and were trained how to handle this kind of film. Movie theater projection rooms were engineered in ways that could contain a fire should one start.

All the while, new materials were being developed to substitute for it, but it took about 50 years to ramp up the production of those. So eventually we moved on to cellulose acetate, which wasn’t particularly stable but wasn’t as flammable, and now polyester film, which doesn’t have that flammable property and is the base of choice for modern motion picture film.

This is an example of a plastic improving upon its deficiencies over time such that it becomes safer. I think that trend will continue as we discover things we don’t like about today’s plastics—like pollution. 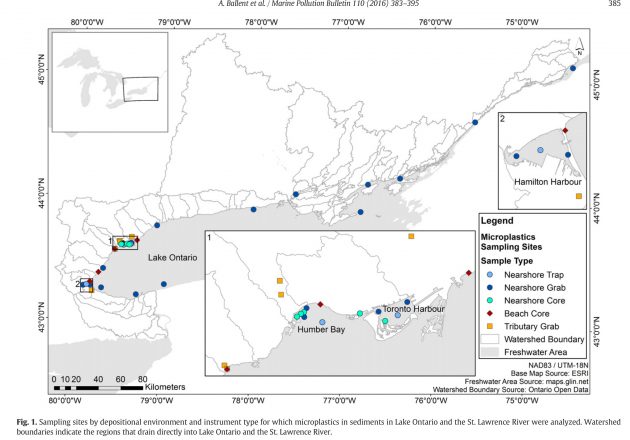 Map from the study: “Sources and sinks of microplastics in Canadian Lake Ontario nearshore,
tributary and beach sediments,” published in the Marine Pollution Bulletin.

Q: So in a historical context, problems with plastics don’t end in world destruction, they end in solutions?

Madden: There are more than 7 billion people on the planet. It would be very difficult to destroy all of us. That doesn’t mean that plastic will not cause some suffering along the way. But I hope and think it will continue to evolve into something that’s more acceptable.

As we go forward, understanding the kind of plastic that makes up the pollution has ramifications for how we manage it, either by regulation, filtration, collection, or design of the plastic. If someone wants to make things that are more degradable or collectable or durable or less toxic, all of that comes down to what kind of plastic it is and where we’re finding it in our waters.