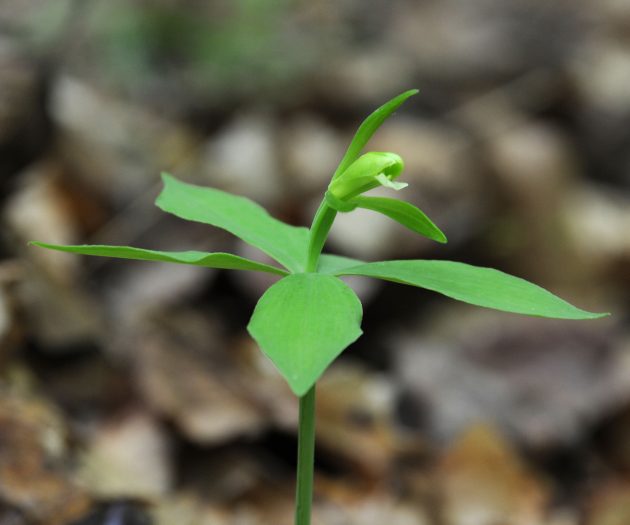 If you are a plant, when life aboveground turns harsh, you have few options. Some orchids respond by going dormant, spending years to decades underground before reemerging. But an army of the right fungi may help jolt them out of dormancy ecologists from the Smithsonian Environmental Research Center discovered in a new study published today (Jan. 6, 2017) in the American Journal of Botany.

Smithsonian scientists have been working hard to understand the ecology of one particular orchid and why it enters and exits dormancy. The small whorled pogonia is widely regarded as the rarest orchid east of the Mississippi. Federally listed as threatened, the orchid has vanished from Maryland and is endangered in 16 other states.

At first glance, the small whorled pogonia is a strange poster child for orchid conservation. It’s a tiny, unassuming plant with a pale green flower above a whorl of five leaves, or occasionally four or six.

“It’s not very fancy at all,” said Rachel Rock-Blake, who worked with the SERC team as part of her master’s thesis at the University of Connecticut. But, she said, its sensitivity makes it an indicator for the health of the entire forest. “You’ve got this plant that is so in tune with the health of the soil and all of the organisms that live within the soil … If that plant is failing, it means that there’s a lot of plants and a lot of organisms in that ecosystem that are probably also in danger.” 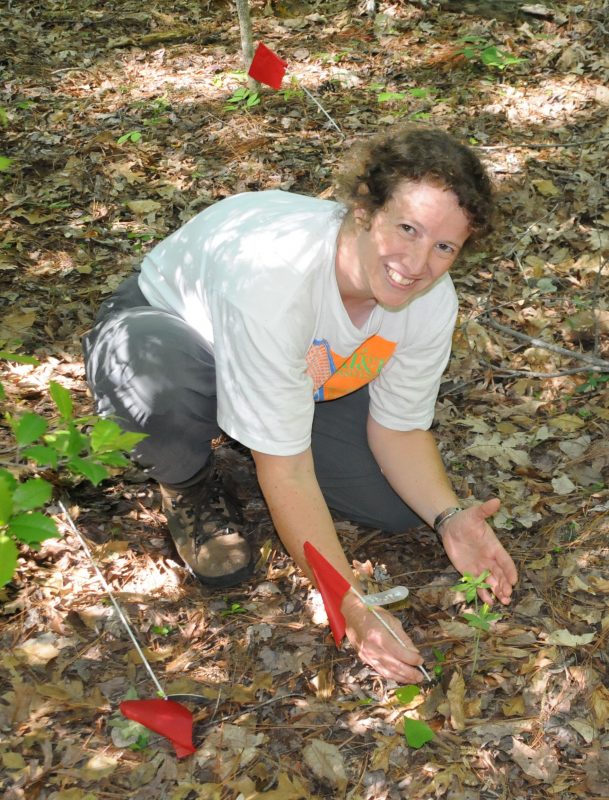 Many small whorled pogonia populations have plants that go dormant and persist underground, perhaps as a way to survive drought, deer or other dangers. While underground, they can secure enough resources to survive and emerge aboveground, most likely because orchids utilize an underground source of energy: fungi.

Fungi grow in and on the roots of almost all terrestrial plants, helping them absorb more water and nutrients in exchange for carbohydrates. But when fungi and orchids interact, only the orchid seems to benefit. In essence, orchids become parasites, digesting fungi as a source of nutrients. Small whorled pogonias, like all other orchids, depend on these fungi, especially during periods of dormancy when they don’t have any leaves to capture sunlight and provide carbon.

The SERC team and Rock-Blake made the first discovery of a possible link between the amount of certain soil fungi and orchid dormancy. They wanted to know whether the amount of fungi in the soil would not only help orchids survive during dormancy, but also help snap them out of it.

“If you have something like a fungus that’s a nutrient source for a plant, it seems logical that the more of the fungus there is, the better the plant should grow,” Melissa McCormick, lead paper author and SERC molecular ecologist. explains. “But nobody’s ever shown that before.”

The ecologists looked at small whorled pogonias in three locations: two in Virginia and one in New Hampshire, places where scientists had monitored populations for years, so they knew which orchids had gone dormant and for how long. The team collected soil from areas next to orchids that had emerged aboveground or were dormant, and analyzed them in the lab to measure how many fungi were present. They were searching specifically for one group of fungi, Russulaceae, that the small whorled pogonia uses. 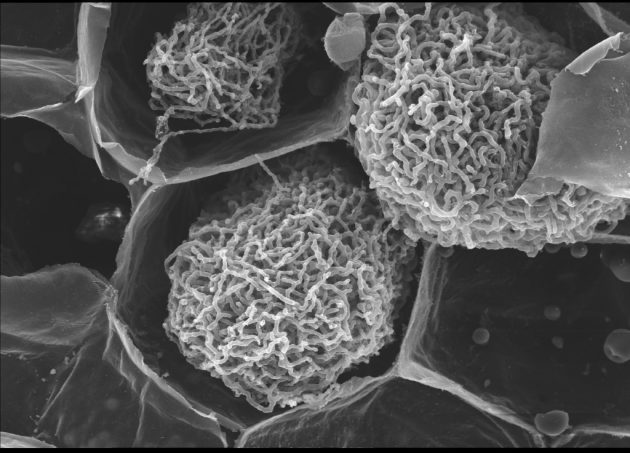 An odd couple: When fungi encounter an orchid root, the fungus roots form coiled balls called pelotons, like these, which the orchid digests for nutrients. (Liz Kabanoff, University of Western Sydney)

The idea was simple enough: Orchids aboveground should have more fungi in the soil around them. Using DNA to find those fungi was another story.

“When you take an amount of soil the size of a lima bean and you have 150 species of fungus in it, being able to pick out just the fungi that you’re interested in or that your plant would be interested in is difficult,” McCormick says.

McCormick, Rock-Blake and SERC intern Hope Brooks did it by using a special fragment of DNA called a primer. The primer latched onto DNA of Russulaceae fungi in the soil samples and nothing else, allowing them to calculate the amount of those fungi in the soil.

Within all three sites, soils with the most Russulaceae fungi were more likely to have small whorled pogonias with aboveground shoots. Soils with fewer of those fungi were more likely to have orchids that had lain dormant for two to three years, and soils where there had never been any small whorled pogonias had the fewest Russulaceae fungi.

The scientists also showed that to bring orchids back from dormancy, it’s not enough to have just some of the right fungi.

“Before, I think we all were running on the assumption that it was just whether the fungus is present or not,” says Dennis Whigham, SERC plant ecologist and co-author. The SERC team showed that having a big enough supply of fungi is just as important as the type. However, what the “right amount” is may depend on the soil. In that, all three sites were different.

That leaves scientists another mystery to solve: how to guarantee enough fungi can thrive to support this orchid. McCormick and Whigham discovered in earlier research that some fungi like decomposing wood. Trees may matter too, as the fungi small whorled pogonias need form relationships with trees as well as orchids. But the answers to conserving endangered plants, McCormick points out, often lie beneath the surface.

“If you’re concerned about a species you’re trying to conserve and you’re only detecting what’s going on aboveground, you’re not getting the whole picture,” she says.