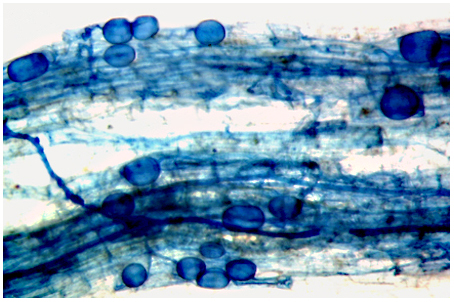 When scientists discuss global change, they often focus on the amount of carbon in the atmosphere and vegetation. But soil contains more carbon than air and plants combined. This means that even a minor change in soil carbon could have major implications for the Earth’s atmosphere and climate. New research by Smithsonian Tropical Research Institute scientist Benjamin Turner and colleagues points to an unexpected driver of soil carbon content: fungi.

“This finding puts soil biology at the front and center of the debate about the factors that drive soil carbon storage,” said Turner, who collaborated with researchers at the University of Texas at Austin and Boston University.

Previous studies considered soil degradation, climate and plant productivity to be the most important regulators of soil carbon content. However, findings published this week in Nature by researchers including Turner suggest that soil biology plays a greater role. Some types of symbiotic fungi can lead to 70 percent more carbon in the soil. The role of these fungi is currently not considered in global climate models.

The majority of plants team up with fungi, exchanging plant carbon for soil nutrients supplied by the fungus. These mutually beneficial relationships can be broadly grouped into three major categories: arbuscular mycorrhizas (AM), ectomycorrhizas, and ericoid mycorrhizas. The AM symbiosis is most common, occurring in approximately 85 percent of plant families, while ecto- and ericoid mycorrhizas (EEM) occur in a few common families.

After an exhaustive number of model runs on data from more than 200 soil profiles from around the globe, the authors found that soils supporting EEM plant communities contained 70 percent more carbon per unit nitrogen than soils supporting AM-dominated plant communities. The effect is significant at the global scale, because it is independent of biomass accumulation, temperature, precipitation and soil clay content.

The marked difference in soil carbon levels between AM and EEM ecosystems is due to the way the two kinds of mycorrhizal fungi acquire nutrients. EEM fungi produce enzymes that allow them to access organic forms of nitrogen, which are not available to AM fungi. By depleting nitrogen from the soil organic matter, EEM fungi limit the activity of the microorganisms that break down dead organic matter and return the carbon to the atmosphere. AM ecosystems impose fewer restrictions on the growth of carbon-consuming microbes.

“This study shows that trees and decomposers are really connected via these mycorrhizal fungi, and that you can’t accurately predict future carbon cycling without thinking about how the two groups interact,” said Colin Averill, the study’s lead author, currently a graduate student at UT Austin. “We need to think of these systems holistically.”

Turner said the study provides strong evidence to support a theory published in 2011 by researchers in the United Kingdom and New Zealand. The results suggest any widespread shift in the species composition of forests could change the amount of carbon stored in soil, with consequences for atmospheric carbon dioxide concentrations.

“These findings will help to refine Earth-system models and promote debate on the extent to which soil microbes influence the global carbon cycle,” said Turner.