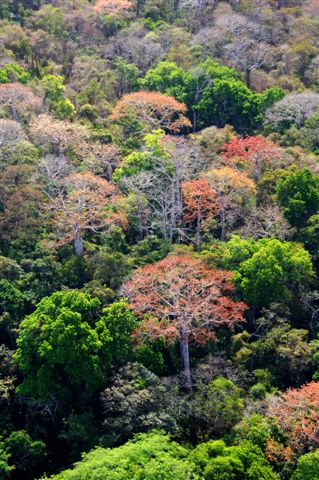 The Smithsonian’s Barro Colorado Island was the site of the first large-scale, long-term forest dyanmics plots. Now there are 42 forest dynamics plots worldwide that use the same methodology, the Smithsonian Institution Global Earth Observatory system managed by the Center for Tropical Forest Science. (Photo by Marcos Guerra)

Scientists braved ticks and a tiger to discover how human activities have perturbed the nitrogen cycle in tropical forests. Studies at two remote Smithsonian Institution Global Earth Observatory sites in Panama and Thailand show the first evidence of long-term effects of nitrogen pollution in tropical trees.

“Air pollution is fertilizing tropical forests with one of the most important nutrients for growth,” said S. Joseph Wright, staff scientist at the Smithsonian Tropical Research Institute in Panama. “We compared nitrogen in leaves from dried specimens collected in 1968 with nitrogen in samples of new leaves collected in 2007. Leaf nitrogen concentration and the proportion of heavy to light nitrogen isotopes increased in the last 40 years, just as they did in another experiment when we applied fertilizer to the forest floor.”

Nitrogen is an element created in stars under high temperatures and pressures. Under normal conditions, it is a colorless, odorless gas that does not readily react with other substances. Air consists of more than 75% nitrogen. But nitrogen also plays a big role in life as an essential component of proteins. When nitrogen gas is zapped by lightning, or absorbed by soil bacteria called “nitrogen fixers,” it is converted into other “active” forms that can be used by animals and plants. Humans fix nitrogen by the Haber process, which converts nitrogen gas into ammonia—now a principal ingredient in fertilizers. Today, nitrogen fixation by humans has approximately doubled the amount of reactive nitrogen emitted. 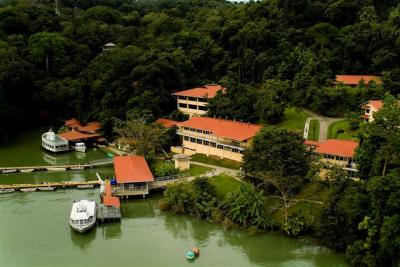 The Smithsonian’s Barro Colorado Island was the site of the first large-scale, long-term forest dyanmics plots. Now there are 42 forest dynamics plots worldwide that use the same methodology, the Smithsonian Institution Global Earth Observatory system managed by the Center for Tropical Forest Science. (Photo by Marcos Guerra)

Nitrogen comes in two forms or isotopes: atoms that have the same number of protons but different numbers of neutrons. In the case of nitrogen, the isotopes are 14N and 15N, although only about one in 300 nitrogen atoms is the heavier form. Imagine nitrogen in the ecosystem like a bowl of popcorn. Normally the ratio of popped (light) to unpopped (heavy) kernels stays the same, but when someone starts to eat the popcorn, the lighter, popped kernels get used up first, increasing the ratio of heavy to light kernels (or 15N/14N in the case of the ecosystem). Light nitrogen is lost through nitrate leaching and as gases such as N2, and various forms of nitrous oxides or “noxides,” some of which can be important greenhouse gases. In the fertilization study in Panama, mentioned earlier, N2O emissions were tripled.

“Tree rings provide a handy timeline for measuring changes in wood nitrogen content,” said Peter Hietz from the Institute of Botany at the University of Natural Resources and Life Sciences in Vienna, who faced down a tiger when sampling trees in a monsoon forest on the Thailand-Myanmar border. “We find that over the last century, there’s an increase in the heavier form of nitrogen over the lighter form, which tells us that there is more nitrogen going into this system and higher losses. We also got the same result in an earlier study of tree rings in Brazilian rainforests, so it looks like nitrogen fixed by humans now affects some of the most remote areas in the world.”

“The results have a number of important implications,” said Ben Turner, staff scientist at STRI. “The most obvious is for trees in the bean family (Fabaceae), a major group in tropical forests that fix their own nitrogen in association with soil bacteria. Increased nitrogen from outside could take away their competitive advantage and make them less common, changing the composition of tree communities.”

“There are also implications for global change models, which are beginning to include nitrogen availability as a factor affecting the response of plants to increasing atmospheric carbon dioxide concentrations,” said Turner. “Most models assume that higher nitrogen equals more plant growth, which would remove carbon from the atmosphere and offset future warming. However a challenge for the models is that there is no evidence that trees are growing faster in Panama, despite the long-term increases in nitrogen deposition and atmospheric carbon dioxide.”

Decades of atmospheric nitrogen deposition have caused major changes in the plants and soils of temperate forests in the U.S. and Europe. Whether tropical forests will face similar consequences is an important question for future research.

The Smithsonian Tropical Research Institute, headquartered in Panama City, Panama, is a unit of the Smithsonian Institution. The Institute furthers the understanding of tropical nature and its importance to human welfare, trains students to conduct research in the tropics and promotes conservation by increasing public awareness of the beauty and importance of tropical ecosystems. Website: www.stri.org.