Tropical forests speed their own recovery, capturing nitrogen and carbon faster after being logged or cleared for agriculture. Researchers working at the Smithsonian Tropical Research Institute in Panama think the discovery that trees “turn up” their ability to capture or “fix” nitrogen from the air and release it into the soil as the forest makes a comeback has far-reaching implications for forest restoration projects to mitigate global warming.

“This is the first solid case showing how nitrogen fixation by tropical trees directly affects the rate of carbon recovery after agricultural fields are abandoned,” said Jefferson Hall, STRI staff scientist. “Trees turn nitrogen fixation on and off according to the need for nitrogen in the system.” 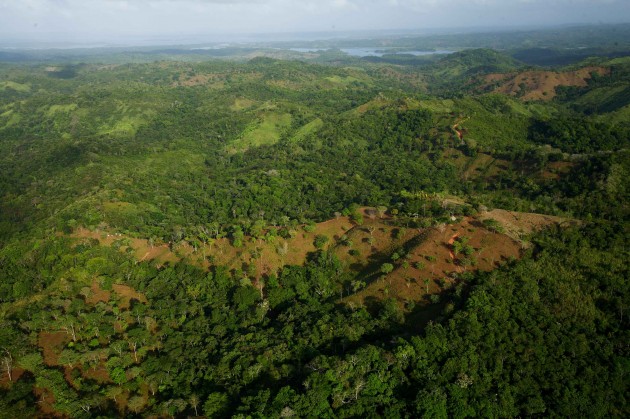 Nearly 50 percent of the world’s tropical forests are secondary forests that have regrown after clearing, agriculture or cattle grazing. The Agua Salud Project in the Panama Canal Watershed makes it possible for Smithsonian scientists to quantify carbon storage, runoff and biodiversity for land uses including teak and native tree species plantations. (Photo by Christian Ziegler)

Hall directs the Agua Salud Project, an experiment spanning more than a square mile of the Panama Canal watershed. Researchers compare land-use options, measuring carbon storage, runoff and biodiversity to find out how mature tropical forest, native trees in forest restoration plots and abandoned pastureland compare. The project hosted the collaboration between scientists at Princeton University, Wageningen University, the University of Copenhagen, Yale University and STRI to explore the relationship between nitrogen fixation and carbon storage.

They compared tree growth rate and nitrogen levels growing on pastureland abandoned two, 12, 30 and 80 years ago with trees growing in mature forests. Tree species that “fixed” nitrogen from the atmosphere put on carbon weight up to nine times faster than their non-fixing neighbors during early stages of forest recovery. Nitrogen-fixers provided enough nitrogen fertilizer in the soil to facilitate storage of 50,000 kilograms of carbon per hectare during the first 12 years of growth.

“Diversity really matters,” said the study’s first author, Sarah Batterman, who worked collaboratively on the project with Lars Hedin at Princeton University. “Each tree species fixes nitrogen and carbon differently so species important at 12 years drop out or become less common at 30 years. You can really see how different players contribute to the development of a mature tropical forest and the ecosystem services it provides.”