Tropical forests are a sometimes underappreciated asset in the battle against climate change. They cover 7 percent of land surface yet hold more than 30 percent of Earth’s terrestrial carbon. As abandoned agricultural land in the tropics is taken over by forests, scientists expect these new forests to mop up industrial quantities of atmospheric carbon. New research by Smithsonian scientists shows increasingly abundant vines could hamper this potential and may even cause tropical forests to lose carbon.

In the first study to experimentally demonstrate that competition between plants can result in ecosystem-wide losses of forest carbon, scientists working in Panama showed that lianas, or woody vines, can reduce net forest biomass accumulation by nearly 20 percent. Researchers called this estimate “conservative” in findings published this month in Ecology. 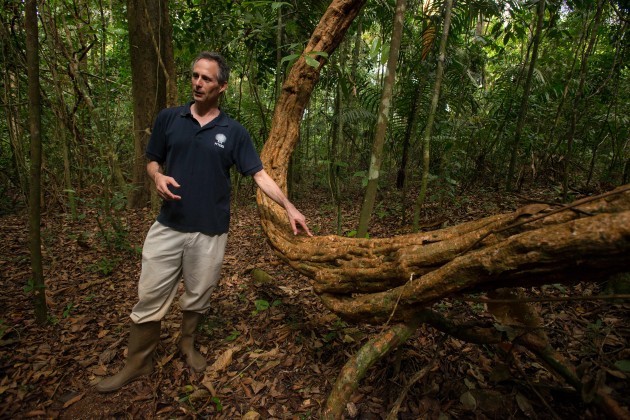 Stefan Schnitzer at the Smithsonian Tropical Research Institute in Panama

“This paper represents the first experimental quantification of the effects of lianas on biomass,” said lead author Stefan Schnitzer, a research associate at the Smithsonian Tropical Research Institute and professor at the University of Wisconsin-Milwaukee. “As lianas increase in tropical forests, they will lower the capacity for tropical forests to accumulate carbon.”

Previous research by Schnitzer and others demonstrated that lianas are increasing in tropical forests around the globe. No one knows why. Decreased rainfall is one suspect, but lianas, which are generally more drought-tolerant than trees, are increasing in abundance even in rainforests that have not experienced apparent changes in weather patterns.

Lianas climb trees to reach the forest canopy where their leaves blot out the sunlight required for tree growth. They account for up to 25 percent of the woody plants in a typical tropical forest, but only a few percent of its carbon. They do not compensate for displaced carbon due to relatively low wood volume, low wood density and a high rate of turnover.

Machetes in hand, Schnitzer and colleagues chopped lianas out of forest plots for this study. After collecting eight years of data comparing liana-free plots with naturally liana-filled plots in the same forest, they quantified the extent to which lianas limited tree growth, hence carbon uptake. In gaps created by fallen trees, lianas were shown to reduce tree biomass accumulation by nearly 300 percent. Findings by Schnitzer and colleagues, also published this year in Ecology, showed that liana distribution and diversity are largely determined by forest gaps, which is not the case for tropical trees.

Arid conditions in gaps are similar to recently reforested areas. “The ability of lianas to rapidly invade open areas and young forests may dramatically reduce tropical tree regeneration—and nearly all of the aboveground carbon is stored in trees,” said Schnitzer. Lianas have been shown to consistently hinder the recruitment of small trees, and limit the growth, fecundity and survival of established trees.

“Scientists have assumed that the battle for carbon is a zero-sum game, in which the loss of carbon from one plant is balanced by the gain of carbon by another. This assumption, however, is now being challenged because lianas prevent trees from accumulating vast amounts of carbon, but lianas cannot compensate in terms of carbon accumulation,” said Schnitzer. “If lianas continue to increase in tropical forests, they will reduce the capacity for tropical forests to uptake carbon, which will accelerate the rate of increase of atmospheric carbon worldwide.”