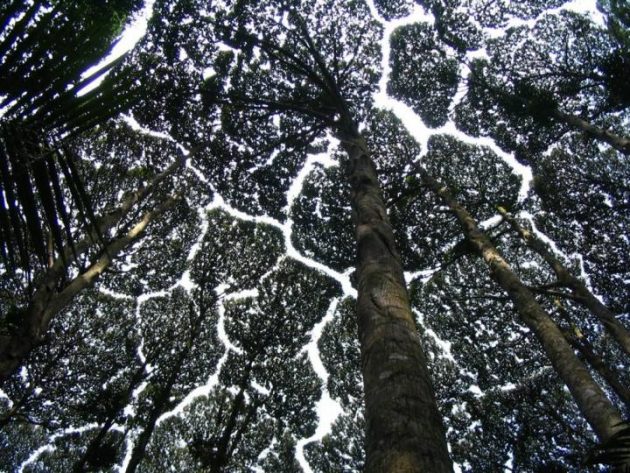 Canopy of “D. aromatica” at the Forest Research Institute Malaysia. (Photo by Patrice78500)

Internet and phone connections are essential for effective communicators and for success in business. New results from the Smithsonian Tropical Research Institute in Panama show that connections between trees may be important for maintaining the rich diversity of tropical forests.

From below, the tropical forest canopy looks like a giant, backlit jigsaw puzzle. A thin, bright outline of light isolates each tree from the others. Biologists call this tendency for each tree to stand alone “crown shyness.”

Tropical forest canopies harbor more than 40 percent of all of the world’s terrestrial species. Toucans fly and monkeys leap across the void between trees. But for raccoon-like coatis, scuttling possums and tiny ants, each tree is an island.

“Nature is so variable, it is sometimes frustrating to try to explain even what seems like an obvious pattern,” said STRI research associate Steve Yanoviak, who is also the Tom Wallace Endowed Chair for Conservation at the University of Louisville. “In this case, we were very pleased to see that something as complicated as diversity in the tropical forest canopy could be explained simply by viewing trees as islands.” 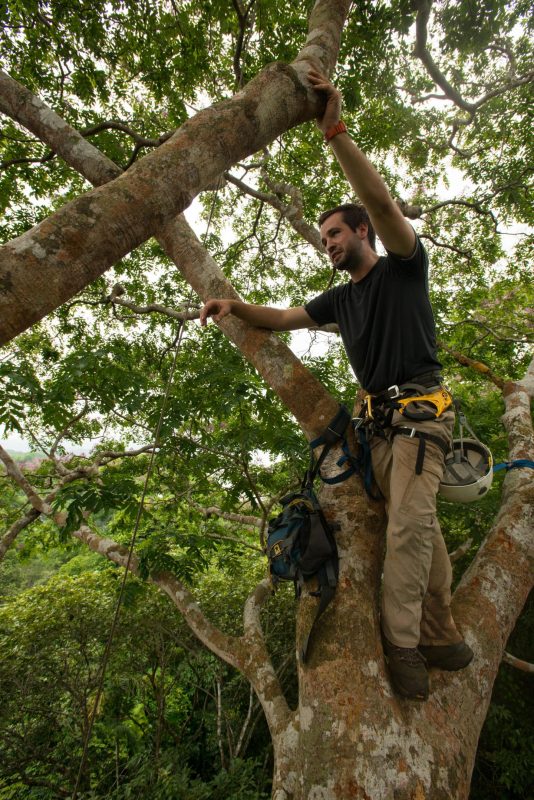 Ben (Max) Adams spends most of his time in the treetops to understand what insects are up to in tropical forest canopies. (Photo by Sean Mattson)

Yanoviak spends as much time as he can climbing up into the treetops, where he studies tropical insect communities, from mosquito and dragonfly larvae breeding in the tiny pools of water that form at the center of the pineapple-like plants growing on branches, to the ants that glide back to the tree trunk when they are brushed off a limb.

Yanoviak’s doctoral student Ben (Max) Adams compared the number of ants in more than 200 trees crowns representing more than 30 tree species. Adams and his assistants used a mixture of honey and meat (ham, tuna or chicken) as bait to trap 128 ant species.

Despite their tendency to be shy, some trees remain highly connected via a complex network of woody vines known as lianas. Stefan Schnitzer, STRI research associate and professor at Marquette University, has authored papers showing that vines and lianas are taking over many tropical forests. He invented a daunting experiment to find out what the impact of this entanglement could be, cutting all of the lianas from the trees in one section of the forest in the Barro Colorado Nature Monument and leaving the lianas in another.

Adams collected 92 species in trees with lianas versus 58 in trees without lianas. He discovered that on average, from two to 20 different species of ants live in a single tree crown. Bigger trees tended to be home to more ant species than smaller trees, but only when the trees were not connected by lianas. Trees connected to other trees by vines and lianas had more than 10 species of ants, whereas unconnected trees had an average of eight ant species.

Trees with lianas often have more of the sort of ant species in which single foragers go out to look for food alone, rather than foraging in groups as other ant species do. And ant species that build big colonial nests were equally common in trees with and without lianas.

Lianas can be thought of as telephone lines or the lines on a map showing the geographic connections between cities via the World Wide Web. Understanding why these vital connections matter is especially important in a world where continued timber harvesting and road building destroy them.