A new study shows that as climate change enhances tree growth in tropical forests, the resulting increase in litterfall could stimulate soil micro-organisms leading to a release of stored soil carbon.

The research was led by scientists from the Centre for Ecology and Hydrology and the University of Cambridge, UK. The results were published online today in the scientific journal “Nature Climate Change. 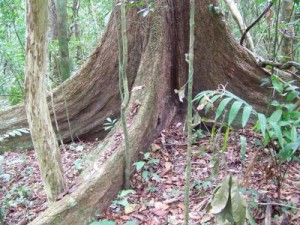 Image right: Leaf litter around the buttress roots of a tropical tree at the study site in Panama.

The researchers used results from a six-year experiment in a rainforest at the Smithsonian Tropical Research Institute in Panama, to study how increases in litterfall–dead plant material such as leaves, bark and twigs which fall to the ground–might affect carbon storage in the soil. Their results show that extra litterfall triggers an effect called ‘priming’ where fresh carbon from plant litter provides much-needed energy to micro-organisms, which then stimulates the decomposition of carbon stored in the soil

Lead author Emma Sayer from the Smithsonian Tropical Research Institute and the Centre for Ecology and Hydrology said, “Most estimates of the carbon sequestration capacity of tropical forests are based on measurements of tree growth. Our study demonstrates that interactions between plants and soil can have a massive impact on carbon cycling. Models of climate change must take these feedbacks into account to predict future atmospheric carbon dioxide levels.” 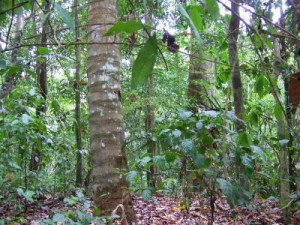 The study concludes that a large proportion of the carbon sequestered by greater tree growth in tropical forests could be lost from the soil. The researchers estimate that a 30% increase in litterfall could release about 0.6 tonnes of carbon per hectare from lowland tropical forest soils each year. This amount of carbon is greater than estimates of the climate-induced increase in forest biomass carbon in Amazonia over recent decades. Given the vast land surface area covered by tropical forests and the large amount of carbon stored in the soil, this could affect the global carbon balance

Tropical forests play an essential role in regulating the global carbon balance. Human activities have caused carbon dioxide levels to rise but it was thought that trees would respond to this by increasing their growth and taking up larger amounts of carbon. However, enhanced tree growth leads to more dead plant matter, especially leaf litter, returning to the forest floor and it is unclear what effect this has on the carbon cycle.

“Soils are thought to be a long-term store for carbon but we have shown that these stores could be diminished if elevated carbon dioxide levels and nitrogen deposition boost plant growth,” Sayer adds.

Co-author Edmund Tanner, from the University of Cambridge, said, “This priming effect essentially means that older, relatively stable soil carbon is being replaced by fresh carbon from dead plant matter, which is easily decomposed. We still don’t know what consequences this will have for carbon cycling in the long term.” —Source: Center for Ecology and Hydrology