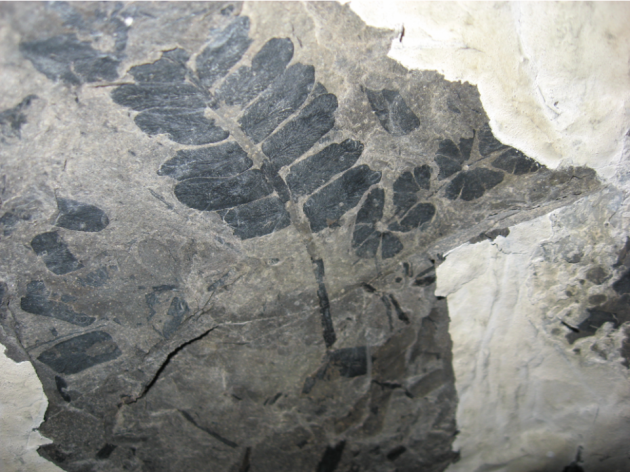 Scientists used fossilized plants, like this seed fern, to reconstruct the ancient atmospheric CO2 record from more than 300 million years ago. (Photo by William DiMichele/Smithsonian)

The last time Earth experienced both ice sheets and carbon dioxide levels within the range predicted for this century was a period of major sea level rise, melting ice sheets and upheaval of tropical forests.

The repeated restructuring of tropical forests at the time played a major role in driving climate cycles between cooler and warmer periods, according to a study led by the University of California, Davis, and published today in the journal Nature Geoscience.

Using fossilized leaves and soil-formed minerals, the international team of researchers reconstructed the ancient atmospheric carbon dioxide record from 330 to 260 million years ago, when ice last covered Earth’s polar regions and large rainforests expanded throughout the tropics, leaving as their signature the world’s coal resources.

The team’s deep-time reconstruction reveals previously unknown fluctuations of atmospheric carbon dioxide at levels projected for the 21st century and highlights the potential impact the loss of tropical forests can have on climate.

Climate change feeding off itself

“We show that climate change not only impacts plants but that plants’ responses to climate can in turn impact climate change itself, making for amplified and in many cases unpredictable outcomes,” said lead author Isabel Montañez, a Chancellor’s Leadership Professor with UC Davis Department of Earth and Planetary Sciences. “Most of our estimates for future carbon dioxide levels and climate do not fully take into consideration the various feedbacks involving forests, so current projections likely underestimate the magnitude of carbon dioxide flux to the atmosphere.”

Similar to how oceans have served as the primary carbon sink in the recent past, tropical forests 300 million years ago stored massive amounts of carbon dioxide during these ancient glacial periods. The study indicates that repeated shifts in tropical forests in response to climate change were enough to account for the 100 to 300 parts per million changes in carbon dioxide estimated during the climate cycles of the period.

While plant biologists have been studying how different trees and crops respond to increasing carbon dioxide levels, this study is one of the first to show that when plants change the way they function as CO2 rises or falls, it can have major impact, even to the point of extinction.

“We see great resilience in vegetation to climatic changes, millions of years of stable composition and structure despite glacial-interglacial cycles,” said co-author William DiMichele, a paleobiologist with the Smithsonian Institution. “But we’ve come to understand that there are thresholds that, when crossed, can be accompanied by rapid and irreversible biological change.”

“The forest giants of the period were hit particularly hard because they were the most inefficient of all the plants around at the time, likely losing water like open hose pipes,” McElwain said. “Their forest competitors, like tree ferns, were able to outcompete them as the climate dried.”

Over the past million years, atmospheric carbon dioxide has been generally low and fluctuated predictably within a window of 200 to 300 ppm. This, the researchers explain, has sustained the current “icehouse” — a time marked by continental ice at the polar regions — under which humans have evolved. This trend has been abruptly interrupted by the pronounced rise of carbon dioxide over the past 100 years to the current level of 401 ppm — one not seen on Earth for at least the past 3.5 million years.

The current unprecedented rate of rising atmospheric CO2 raises concerns about melting ice sheets, rising sea level, major climate change, and biodiversity loss — all of which were evident more than 300 million years, the only other time in Earth’s history when high CO2 accompanied ice at the polar regions.

The study was funded by the National Science Foundation and the European Research Council.